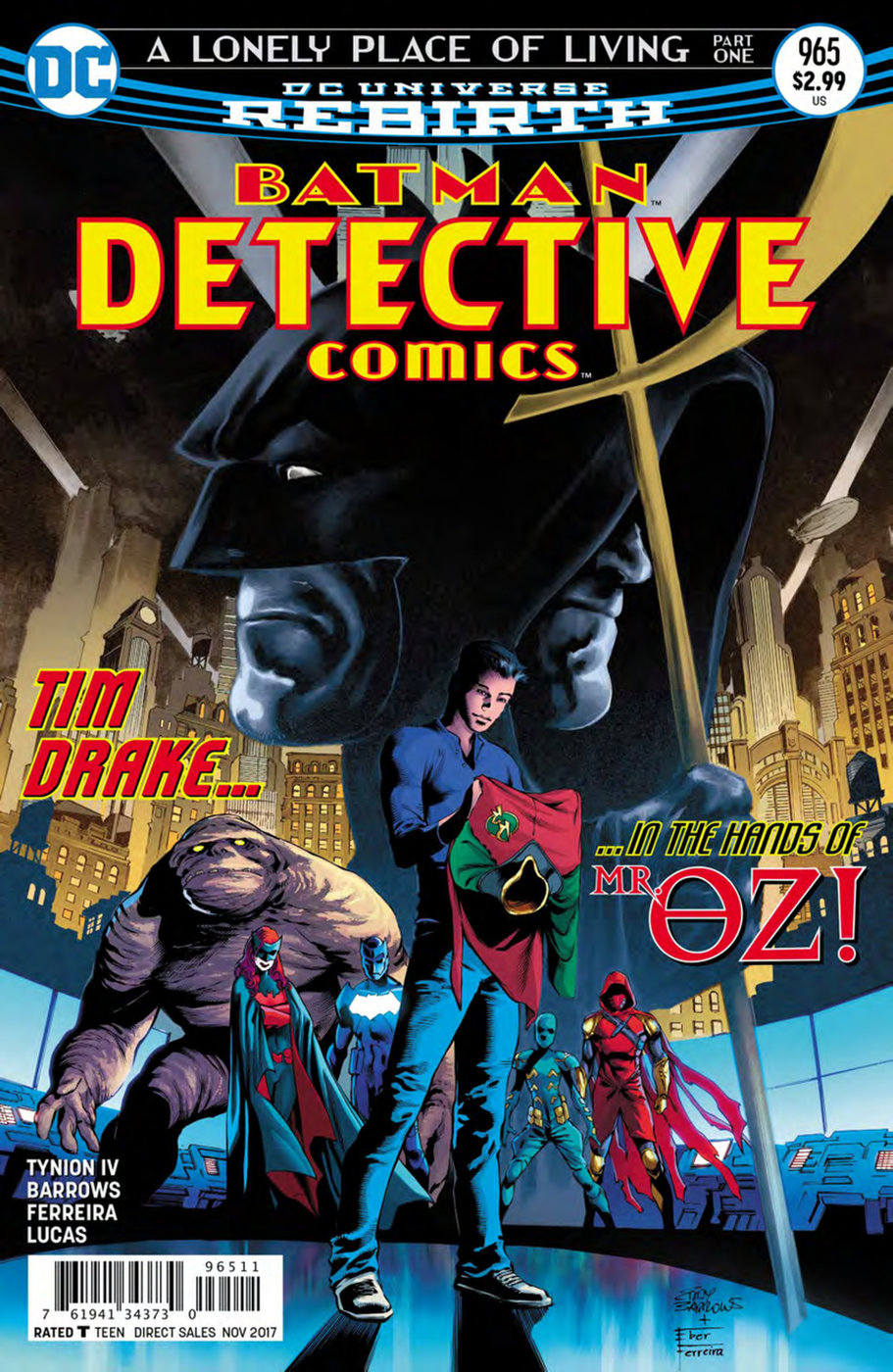 "A Lonely Place of Living" - Chapter 1

Reviewed by: Keith Samra
Click to enlarge
We open with a flashback to Tim Drake's origin as he takes the mantle of Robin. Tim himself narrates his story to the mysterious hooded figure who is known as Mr Oz. It appears that Tim is being interrogated regarding his exploits as Batman's partner. But Tim proves that he can also take charge, as he taps into Mr Oz's software system and frees himself. Tim begins an assault on Mr Oz, only to be quickly defeated, it is here that we see Mr Oz reveal himself as Jor-El, Superman's biological father. He locks Tim in his cell and leaves.

Soon after, Tim manages to send out an SOS, as a last ditch effort to escape, hoping that one of his allies in Gotham will respond and come for him.

He gets a reply from none other than Batman himself, this leads an excited Tim to seek out his mentor, who appears to be in the same facility as him. Tim locates Batman, only to discover that he is not the Batman he knows in Bruce Wayne, but rather an adult version of himself, who has become the Dark Knight of his future. One that wields a gun, and isn't afraid to use it.

The young Tim can't come to terms with himself ever becoming Batman, leading the older Tim to brush aside his younger self, and prepare to engage with an oncoming threat... "We weren't the only prisoners in this place"... It is then that the monster Doomsday breaks through the walls...

Story - 5: This is everything I want and love about the current DC Comics. This story has been simmering for almost a year. Over in the Superman books, Mr Oz has popped up from time to time, with his agenda unknown to us as the reader until recently. It was when he "rescued" Tim from his impending death, that he crossed over to the wider DCU. Which leads us here.

Tim Drake is my favorite Robin, this side of Dick Grayson. He was the Robin that I grew up with in the 90s. I hated how he was pushed aside for Damien, and had to become Red Robin, and let's not even get into what happened with him in the New 52. So you can imagine how excited I was to have him return to the "Bat-fold", especially now with this connection to Superman.

Tim gets a minor updated origin, which is 90% faithful to the original. I commend James Tynion IV for crafting a story without losing any of the magic that made the original so great. Most writers these days just write over or create new origins, disregarding that which came before, so it's great to see a writer put in so much effort to honoring the past while telling their own stories.

The origin is not the only thing that James Tynion IV told masterfully, I loved the fact that he took cues from Geoff Johns' "Teen Titans" run from the 2000s, with Tim growing up to be a more violent and questionable Batman, while his younger self not wanting anything to do with it. Also the seamless tie-in to "Action Comics" was great.

If we look back, Mr Oz abducted Doomsday when Superman and Wonder Woman attempted to send him into the Phantom Zone, it's all coming to light now. So if you like what is happening in "Action Comics" recently, I urge you to check this arc out.

Art - 5: If you have ever read any of my reviews, you know that I am the "art guy," so I was absolutely delighted that Eddy Barrows returned for this arc, and I get to review it. Barrows started off as the regular artist for "Detective Comics" at the start of 'Rebirth', but had been absent for the last few story arcs.

What really stood out to me the most was Barrows' recreation of the panels that the great Jim Aparo drew in the original origin story for Tim Drake "Lonely Place of Dying". This issue really paralleled a lot from Jim Aparo's book, but gave it a more updated look.

The art had nice flow, and didn't trip up the story in any way. So I am glad that Barrows was behind the steering wheel for this. Loved the reveal of Jor-El under the cloak of Mr Oz, and the last page as Doomsday bursts through.

Eber Ferreira used his palette well in coloring the book. I especially love the soft almost painted panels. I think they add a lot of gravity to the visuals.

Cover Art - 5: Both the covers are great for this issue. The main cover by Barrows is a wonderful homage to the "Lonely Place of Dying" cover by George Perez. However the variant cover by Rafael Alburque is a most wonderful call back to the Krypton scenes from Superman: The Movie. With the rotating rings and the floating heads in the back.