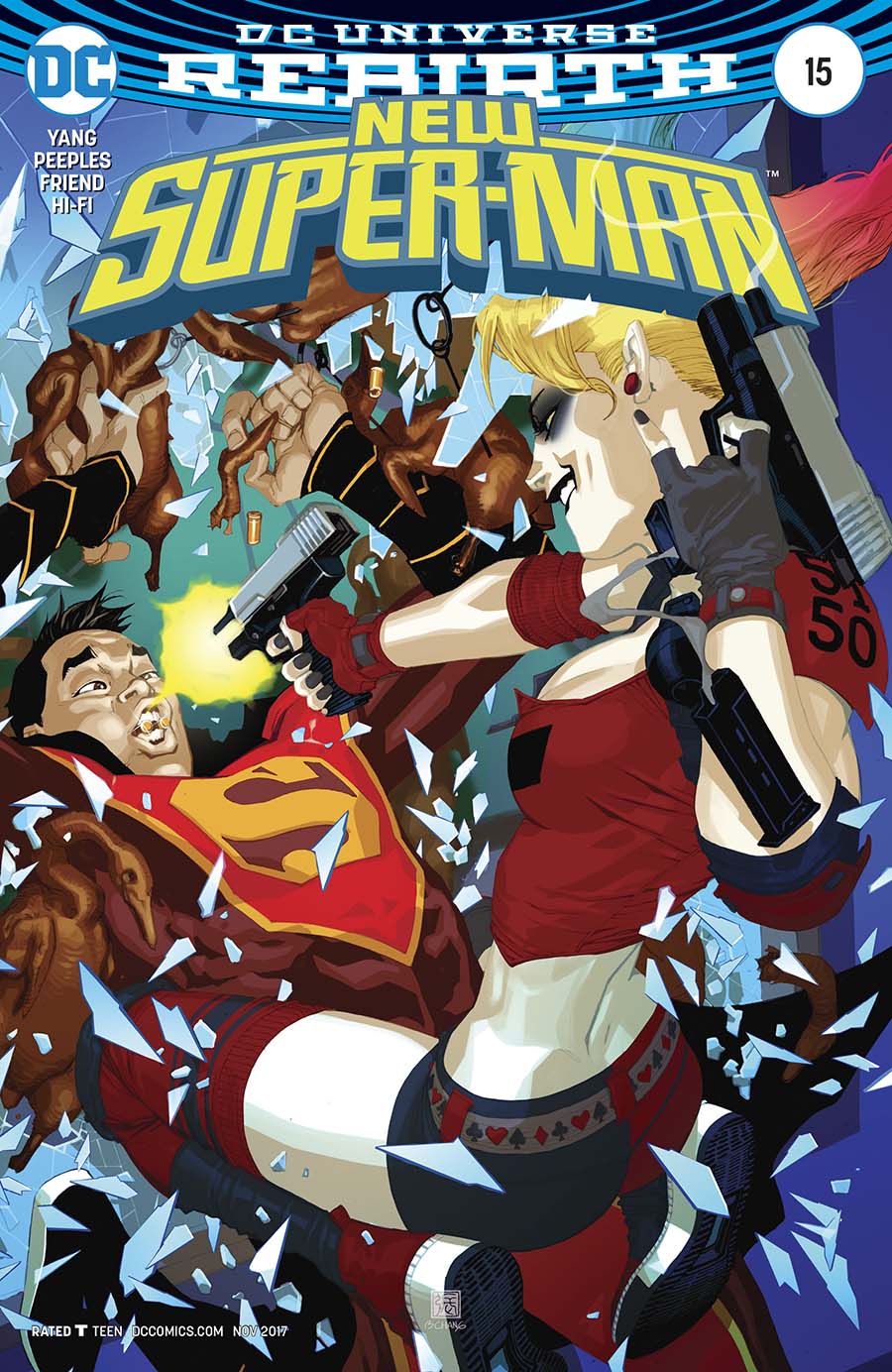 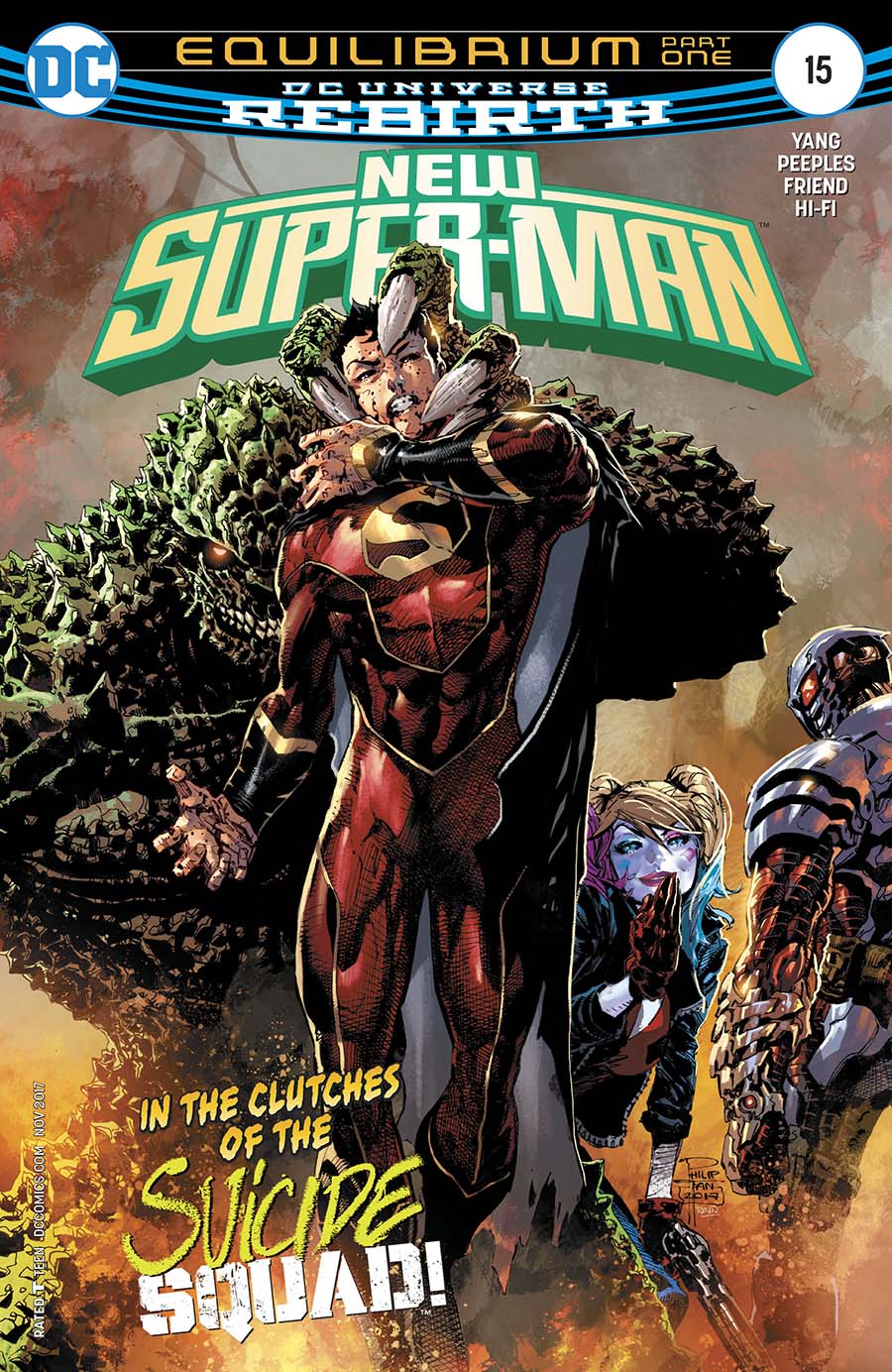 With Emperor Super-Man dead, the Suicide Squad are determined to destroy Super-Man. A large fight ensues involving The Great Ten, the Suicide Squad, the New Imperial Army, and the Justice League of China. During the battle, Harley Quinn manages to stab Kenan with the kryptonite sword that ended Emperor Super-Man. Kenan is evacuated to an airship by Dr. Omen where his wound is treated. Dr. Omen reveals that her identity as Meitai was a sham so she could infiltrate Zhongdan's brother's army of radicals. Omen and Zhongdan get into a fight.

On another plane of existence, Master I-Ching is defeated by a dark version of himself. This dark version reveals himself to Harley Quinn and offers assistance after the JLC rendered the rest of her team useless in the fight. Emperor Super-Man is revived as a Doomsday. Kenan gets word of Emperor Super-Man's return and leaves the airship to handle the situation. As team leader, Kenan insists his teammates back off. The two Super-Men exchange blows in a scene reminiscent of the final moments in "The Death of Superman". Before Kenan dies, he awakens in another time. Ching Lung tells Kenan that he is in 1937 - the beginning.

Story - 4: I'll come out right now and say that summarizing the last few pages of this book were slightly challenging. Not because the story is poorly told or unclear, but because the concepts the book tackles are difficult to explain out of context in a synopsis form. While a lot of the book revolves around the fight over Kenan, there are some great reveals in this issue. We finally discover what really happened to Kenan's mom and why she made him Super-Man, among other things. The physical battle takes a backseat to the emotional drama in the issue. I consider it a mark of strong storytelling when the author is able to make the reader more interested in the emotional conflict than the physical. Yang has done that throughout this entire series and I must commend him.

As when it was first revealed several issues back, I am very much intrigued by the Ching Lung story. What does he mean when he says he's the beginning? Well, aside from the fact that he was on the very first issue of Detective Comics back in 1937. There's something very meta about his inclusion in this title that hits a special soft spot with me.

Art - 4: I really enjoy Brent Peeples' artwork. While there are some moments where a character's face looks a little wonky, the rest is just fantastic. Kenan looks very much the heroic type here, but still retains his boyish features. It's a nice visual representation of the progress he's made as a character. The recreation of the iconic Death of Superman panels is especially well done and the two page splash of the JLC in action is just so stunning to look at. However, the panels that grabbed me the most were the ones featuring Kenan in 1937. Here, I'm going to praise the entire art team. Those panels just look spectacular and really recreate that 1930s comic book feel. I'm a sucker for that kind of stuff.

Cover Art - 3: This cover is much better than the past few. The image accurately depicts a central plot point of the issue and does it in a way that doesn't reek of desperation for increased sales.However, I feel like the cover could have been drawn in a more interesting way. I feel like I've seen this cover at least ten times in the past year. The cover isn't bad, but it's certainly a bit derivative.

On a side note, Harley's face slightly bothers me. She isn't drawn poorly, but the expression on her face just irks me. It's an odd complaint on my end, but overall, the cover is just fine.

Variant Cover Art - 2: Wow! This is... not good at all. Can we please have a new artist for this title's variant covers? This cover is just an ugly mess.