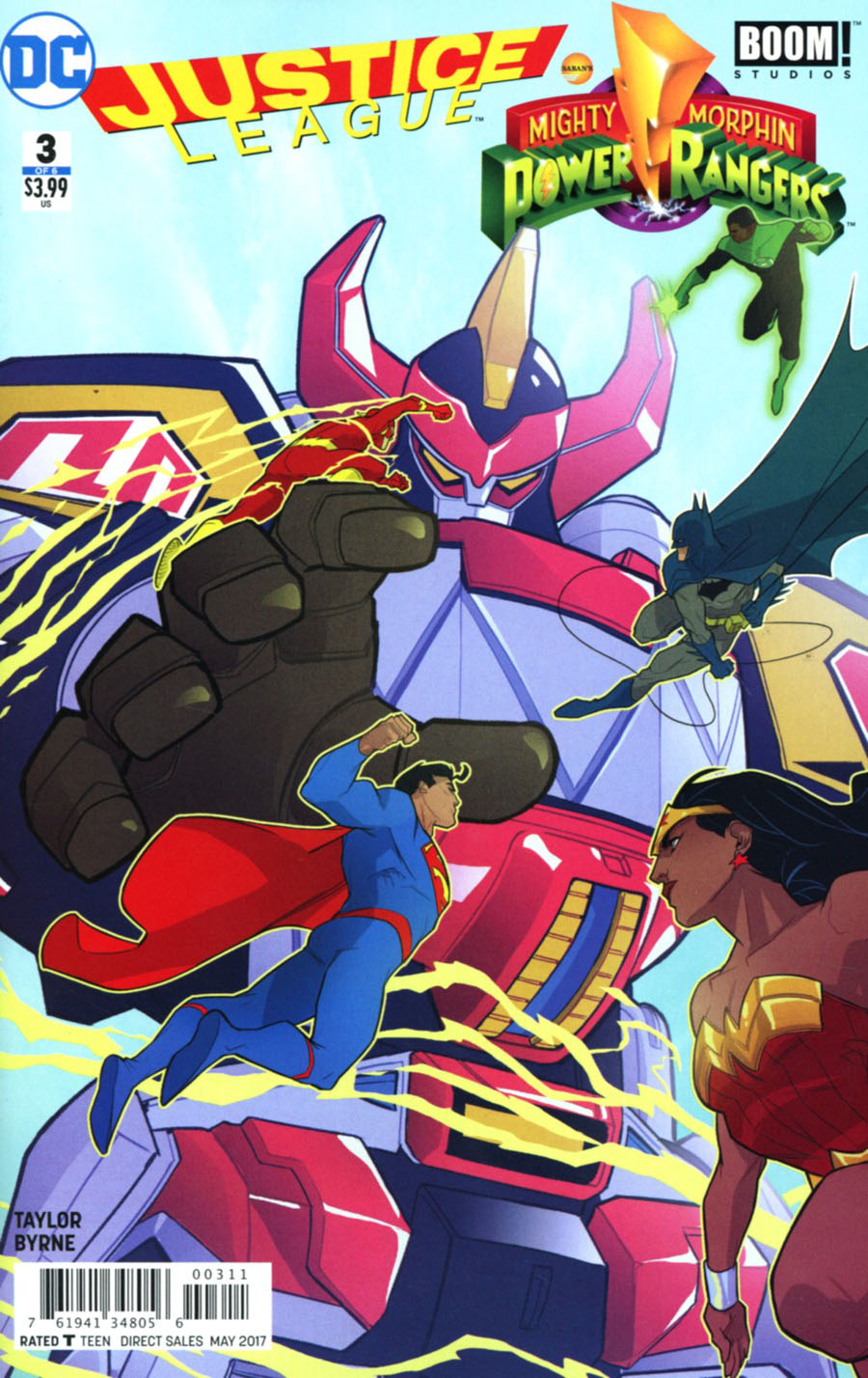 Reviewed by: Keith Samra
Click to enlarge
Picking up from the last issue, the Power Rangers and the Justice League pair off and head to the different cities that are being attacked by the creatures Zedd and Brainiac unleashed upon them.

The League calls in other heroes to help lend a helping hand. Zedd attacks the Rangers and takes their Power Coins from them, leaving them powerless.

In an attempt to help the Rangers go back home to their dimension, and stop Zedd, the League with the Rangers head to Switzerland to the Cern facility to open up a doorway to their world.

Story - 4: Well, I must say that I did enjoy this issue a lot more than I did the last, which actually caught me by surprise. There was a lot more "meat" to this chapter, with plenty of action also.

I loved the way Superman was written, from the way he comforted and advised the PR to the way Batman described him, as they walked into the Cern facility to ask the scientists there if they could use the Super Collider.

A little sick of Batman giving orders, but that's the world we live in at the moment.

It is interesting to see what Lord Zedd will do now that he has the Power Coins of the Rangers. I was hoping to see Brainiac a little more, but I guess pacing of the story is more necessary.

We are at the half way mark for the series so far, it seems to be getting a little better with each issue, here's hoping it will have a strong finish.

Art - 5: Steven Byrne does a good job on the art and coloring chores yet again this issue. As I mentioned in my previous reviews of this series he has a very "cartoonish" style, but it allows for some great expressions on the characters faces, though in saying that, I'm not completely sold on his Superman's look in the face. Just seems a little goofy looking at times.

Some of the poses that the League members are in look a little awkward at times, for example Batman jumping into action on page 7, it looks more like a Spider-Man pose to me personally. Other than that, a solid action packed issue. I love the panel work, and the way the action is paced. Specifically the use of the Zords, I can't imagine that they would be easy to draw, but Byrne manages to keep them looking as a natural extension of the story, instead of over sensationalizing them like some artist would, or make them look messy and weird.

Every time Superman appeared seemed really well done. The way Byrne posed him looked very natural and very "Superman like". The way he stood up straight, walking in the lead to the other members of the League, and the scene at the Cern facility in Switzerland, where the scientists were in awe of him standing in front of them. It's the way I like my Superman portrayed.

Byrne did a "5 O'clock" shadow to Superman's face which I thought was an interesting touch, but all the other heroes didn't have one, not even Batman. I wonder why it may have just been Superman... Maybe he didn't get a chance to heat vision it before the Power Rangers arrived on their Earth.

I also enjoyed the guest appearance by the other heroes of the DCU. Nice work by Byrne, I can imagine it was a dream come true for an artist, it certainly would be for me. Here's hoping we see more of the John Stewart/Green Lantern, he's a personal favorite of mine.

Cover Art - 5: Karl Kershl's cover of the League fighting Mega Zord can be described in one word... Epic! I always love when I see our heroes fighting a foe that's larger in stature. If I had any complaints it would be Superman's blue boots, but that is not Kershl's fault, nor even he colorist's.