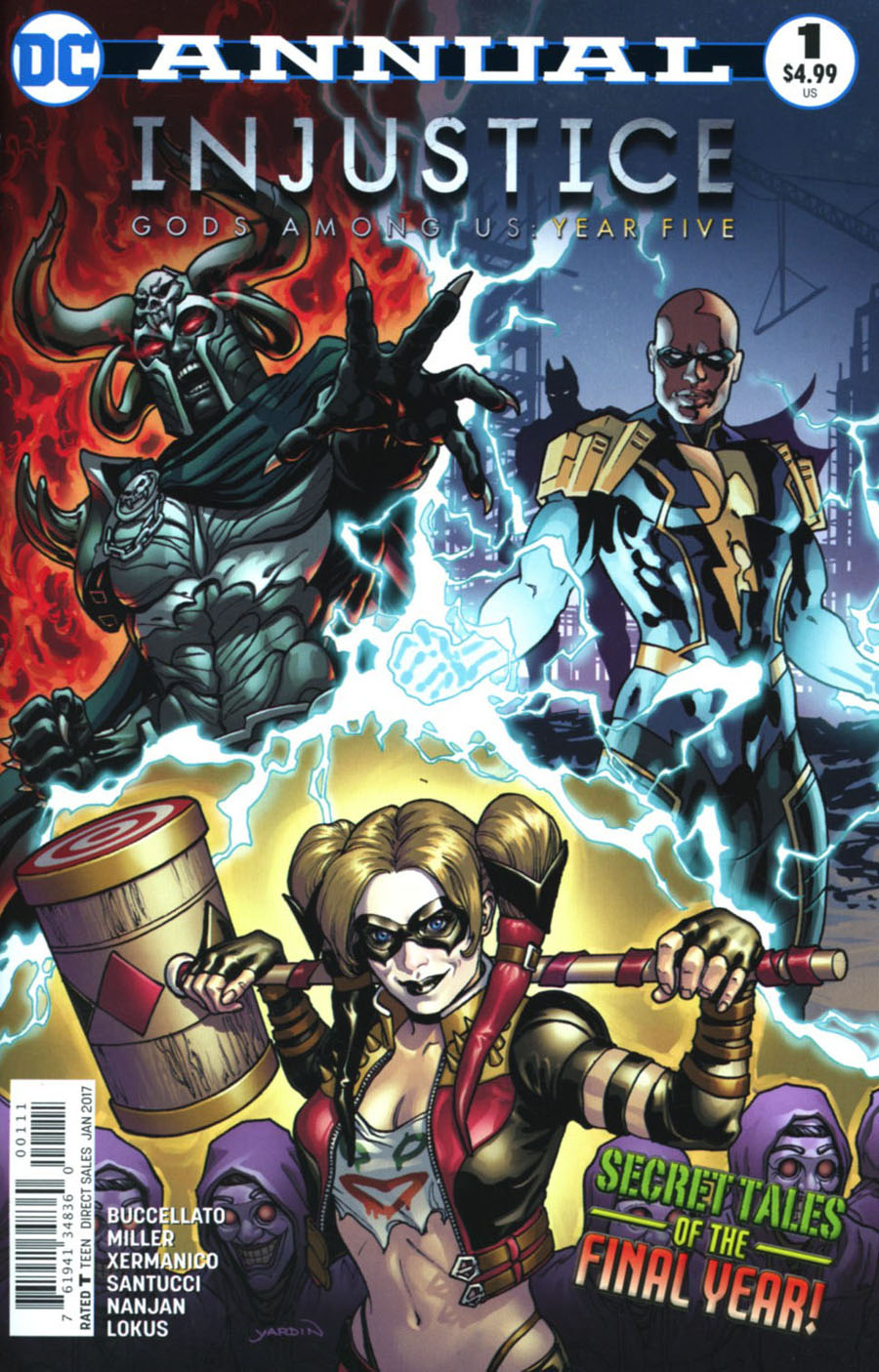 Harley Quinn seeks to retire from her career as Harley Quinn, but falls in with a group of Joker mask wearing thugs, known as the Clan. Ares escapes from Apocalypse and returns to offer his services to Regime Superman. Atom and Black Lightning approach Regime Superman about restoring Metropolis, and work to accomplish just that. Metropolis is restored and Lex Luthor gives the Batman his walking papers.

Story - 2: This is without a doubt Bucellato's best work regarding Injustice, and it is as uneven as what he's inventories thus far. The Harley Quinn story is needless and throwaway. It's mere setup for alignment with the new video game coming down the pike. Ares' return falls in line with the aforesaid, and it's just a silly story as well. What does Ares have to offer as the God of War, when he cannot defeat Wonder Woman, who should be nowhere neat as powerful as he is? It is this sort of vs battle nonsense that has weighed down Buccellato from start to finish with Injustice. Things happen with no reason or thought, other than "I'm Batman" or "It's Wonder Woman". It's not the DC Universe, but a low level Mortal Kombat realm, and with much less entertainment value. However, there is "Reconstruction".

The final story delivers in a manner that makes me vexed that Buccellato phoned in most of his stories. The plot of Metropolis being restored, Regime Superman using the feat to cement his position as High Chancellor, and Lex Luthor reconsidering his relationship with the Batman, especially when he tells the Dark Knight that he is far from blameless, is a slice of the depth that could have been had by Injustice; depth that would have been welcome in the development of Regime as a villain, and the necessary intrigue that would have to follow in him consolidating his power, while the Batman seeks to set the world to right. This is the texture that was deliberately missing from the series, and it was very much needed. Stories of this ilk would have validated the reception Injustice received, as opposed to it being crib notes for the DC Universe proper, written for those who could give a wave about it.

Art - 4: Miller has always done a serviceable job, but it's the line work of Santucci that really stands out, if only because it doesn't look phoned in. There is the quality of someone who wants to do a good job, and that makes all the difference.