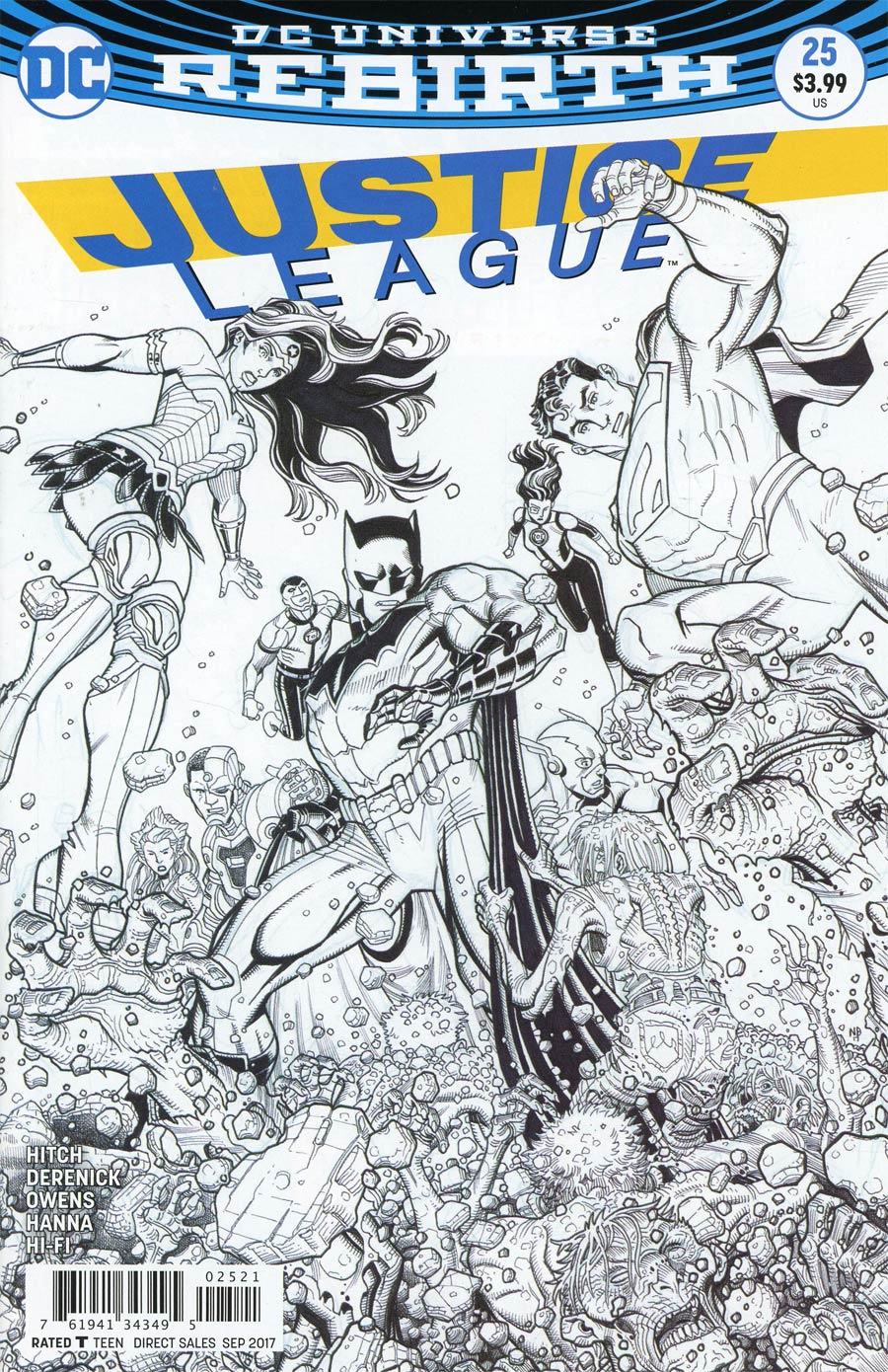 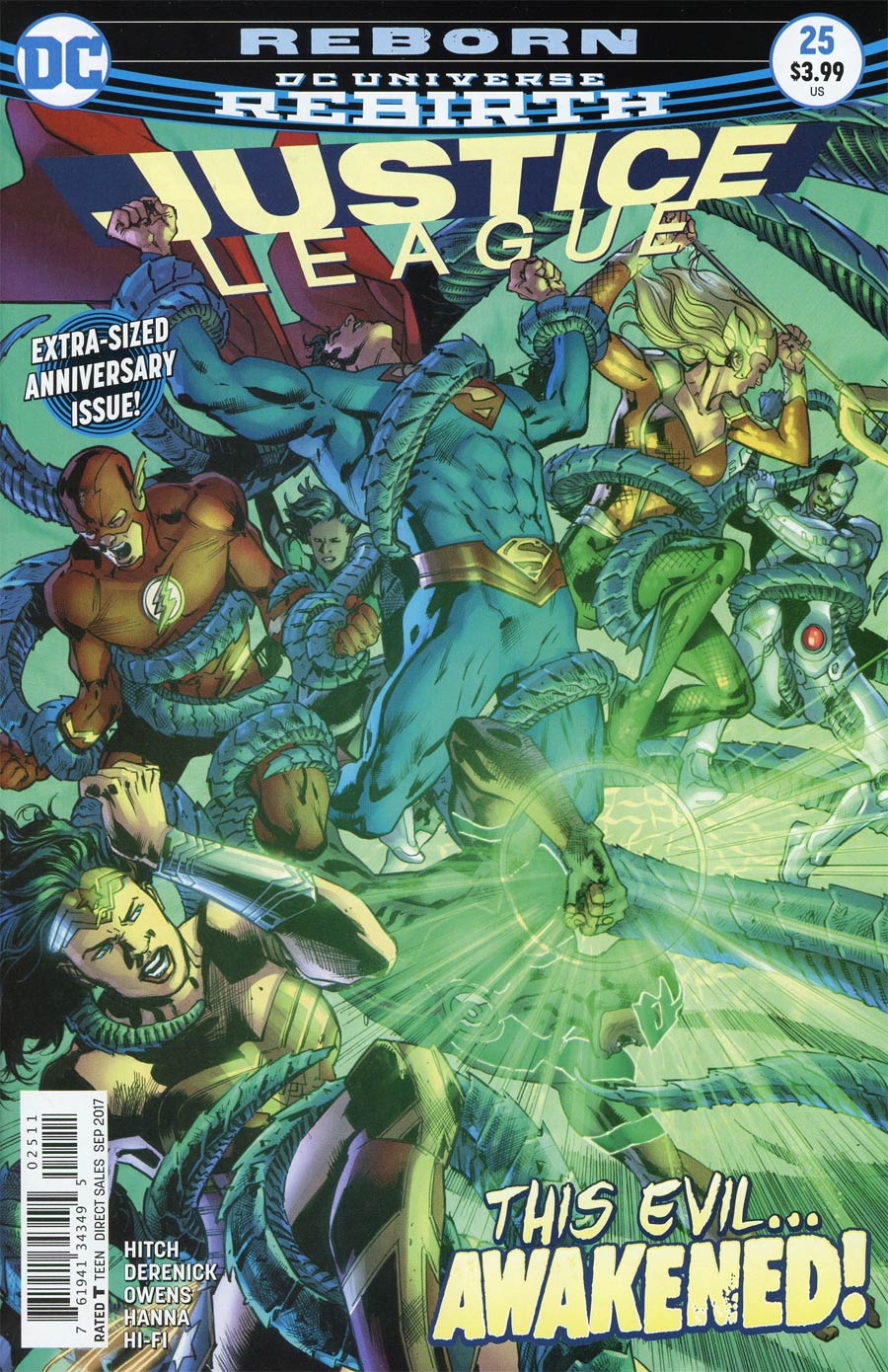 The books opens up with a tale of a being called Shirak who took over world after world, turning each world's inhabitants into zombie like soldiers. This carried on until Shirak and his armies came across the Green Lantern Corp. A massive war erupted between the two, many lives were lost on both sides, but in the end the Green Lantern Corp prevailed and Shirak exploded into little shards. Where each shard fell he would rise again and so would his army. The Corp tracked down all of the shards but one, and that one fell to Earth.

In the present, we find that this tale is being told by Molly to Batman. Molly was a villain in the Timeless story arc a few months back. She warns him of a coming doom, and references a slew of story arcs from Hitch's run. The Timeless couldn't stop it, The World Breakers couldn't stop, nor did the Purge. She then said it's now up to you to stop it, and she will tell him everything she knows "It's all about Rebirth", she tells him.

The story shifts to the Michigan Science Center, Detroit where Baz and Vic (Green Lantern and Cyborg) are chaperoning a High school field trip. A student runs up to Vic and Baz and tells them one of the teachers is feeling ill. Vic offers the teacher some water when all of a sudden he pulls out a gun and grabs a student. The teacher says the voices are telling him for blood, for life. It appears as if the teacher is trying to fight whatever it is that is making him do this as he lets the student go puts the gun to his own head says, "wants blood" and pulls the trigger.

Molly is telling Batman that time repeats itself, it's an endless cycle. "The crisis, Flashpoint, Rebirths all symptoms of something bigger". Batman asks, "Do you know what it is?" and she responds, "Nobody does but we can all feel it and its effects. More evil is walking today that should have stayed dead."

Back at the school, the "dead" teacher's body forms a cocoon around it and he morphs into Shirak. He lets off a gas that turns everyone in a 3 mile radius into his new army. Baz throws up a shield protecting him Vic and some of the kids. Baz goes full Green Lantern and charges at him but Shirak thrashes him around like a doll.

Molly tells Batman, ŇThere's a mind behind it. A will, a curiosity, it has created reality, molded it, shaped it, and everything within it has a consequenceÓ. ŇYouŐre talking about God, I don't believe in God", Batman replies.

Baz has called in the Justice League for help and Mera, Flash, Jessica, Wonder Woman and Superman respond. Our heroes manage to temporarily hold back the army, but Shirak eventually subdues the newly arrived heroes. Cyborg discovers that Shirak's power is technological and Baz uses his ring with Cyborg's help to rewire his programing. Stripping all the power away from Shirak, he cocoons again and out comes the teacher unaware of what has transpired.

"The end is here, Bruce you've brought it on everyone, everything, all of you have. You're about to find out just what your lives are worth," Molly warns Batman.

Up next... The Children of the Justice League?

Story - 3: I am giving this story the benefit of the doubt that we will look back a year from now and realize just how important Molly's conversation is. But the other story with Shirak was not that great. Thousands of Lanterns died fighting these thing years ago, but basically Cyborg and Baz take it down. A few other things that made me go WHAT? Where did the teacher get the gun to begin with, and didn't he blow his head off? So how come he is fine at the end with his head still attached? The other thing I had an issue with was the way #24 ended with Hate Drones being deployed in Pakistan and our heroes rushing off. The book should have at least opened with them finishing that battle before starting this story arc. I did not read Timeless. I stopped reading this title after the Suicide Squad crossover so a little info on how this woman was who is talking to Batman would have been helpful, they never once that I can tell mention her by name. I had to do a little research to find out who she was, and speaking of Molly, she calls him Bruce throughout the entire issue, yet he is in full Batman gear. How does she know? At one point Molly mentions Crisis, Flashpoint, and Rebirth. It's as if DC has had this massive prelude planned out with all the antagonists in Justice League leading toward a massive ending. Maybe the information in the Justice League books have more of an impact on the overall Rebirth story line then we initially thought. I know I am not alone in thinking this book was too big for Bryan Hitch and we may be right, or maybe when it is all said and done it is him laughing at us for giving up on his run.

Art - 3: The close up work on this book is very pleasing to the eye, the panel where the heroes answer the call for help come to mind. Great renditions of Superman, Jessica and the rest. It's when the "camera pulls back" and he draws far way images that the detail seems to disappear taking away the overall image of the book.

Cover Art - 2: Big letdown after last issue's cover. Just look at Wonder Woman's face, does that even remotely look like the Amazon princess that we have been accustomed to seeing? The only redeeming thing is if you look closely at the cover all of the heroes are helpless except for Baz who appears to be charging at whatever is incapacitating the others; foreshadowing what is to come in the book.

Cover Art - 0: Last time I gave a zero to a cover I was given some criticism, and I welcome people's opinions. That being said, this cover to me was worse than Superwoman #12's Variant. I usually like the B&W covers, but this was a big turn off on the actual art itself. Buy the main cover, trust me.