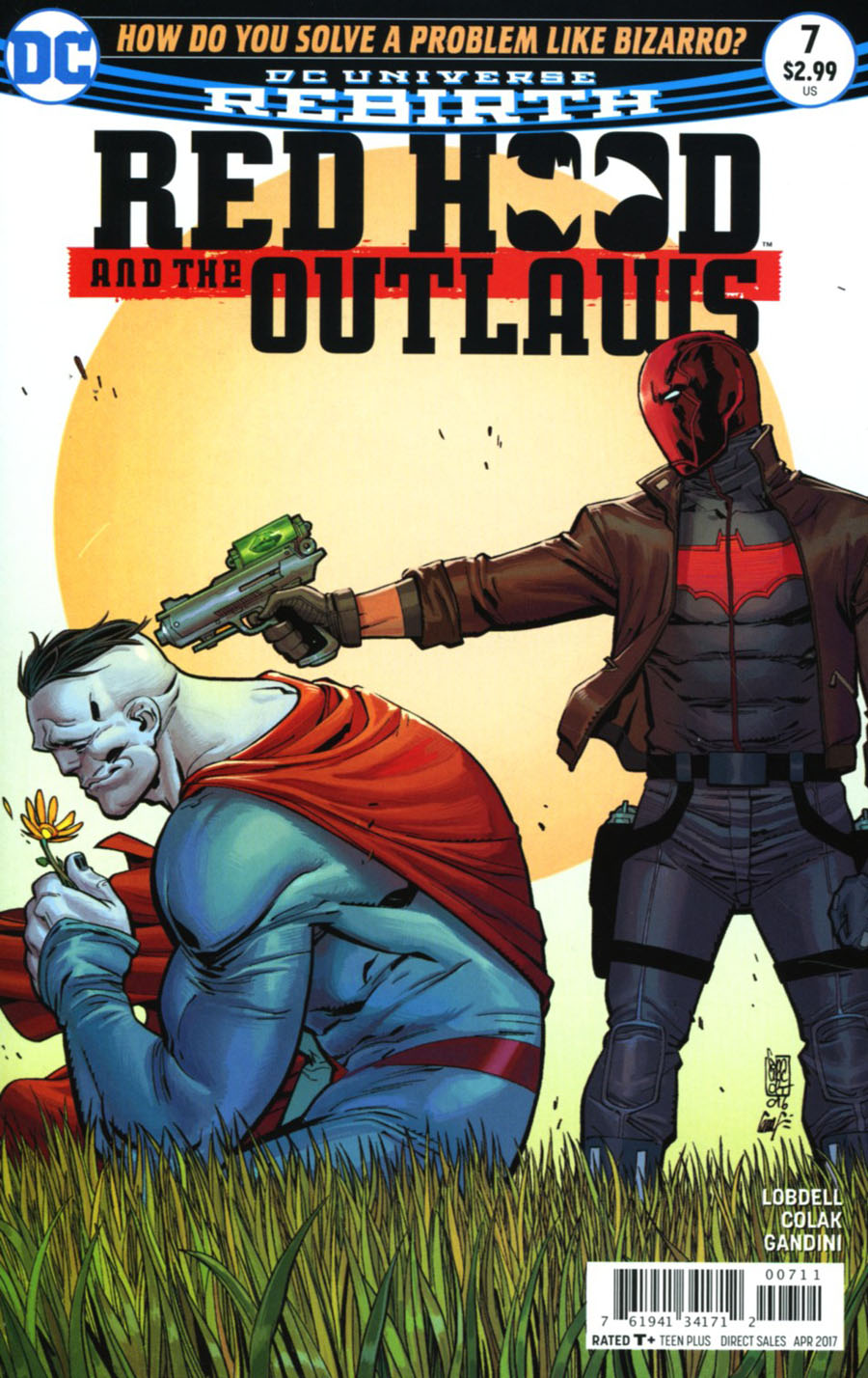 Reviewed by: Keith Samra
Click to enlarge
Redhood is shutting down all of Black Mask's drug cartels in Gotham, with the help of Bizarro. During the battle with the drug pushers, Killer Croc appears and throws Redhood across the warehouse, only to be caught by Bizarro. To Redhood's shock Bizarro freezes Crocs head, and then punches it clean off. Only then it is revealed that Croc was in fact a robot. Redhood asks Bizarro to be honest and tell him if he knew that Croc was indeed a robot, and that was why he used excessive force. Bizarro says, "Sure. Bizarro knew... Me Knew."

Later in the Outlaw's hideout, Jason asks Artemis what she thinks of the whole ordeal, she tells him that he is not crazy for being angry at Bizarro, and then shows him all the computer files they liberated from Black mask, which show the procedures that Lexcorp went through to try and clone Superman, giving birth to Bizarro instead. The video clips show how Bizarro's previous to this one all got violent and killed the lab staff. Then show Lex Luthor ordering the destruction of all the rest of the Bizarro's.

Jason feeling all the turmoil of what to do with Bizarro goes to the batcave to visit Alfred, who gives him a pep talk as only Alfred can. Jason asks Alfred not to tell Batman he visited, as he "borrows" something from the vault in the batcave.

Later Jason and Bizarro head over to a lake to chill. The two of them lie down and stare at the sky. Bizarro opens up to Jason and tells him what he feels and how he knows he's a clone of Superman, but hopes to one day be something more. Jason during this talk contemplates shooting Bizarro in the head with a piece of Kryptonite he took from the batcave. After hearing Bizarro's testimony, Jason decides against killing Bizarro, and the two stay and watch the sunset over the lake.

I loved the turmoil that Jason was going through this issue. Knowing that Bizarro is dangerous, and that he should act early, by removing him from the equation, rather than letting him live and risk him becoming a mindless savage bent on killing. We obviously knew that he wouldn't actually kill him, seeing as he is an integral part of the dark trinity, but watching Jason ultimately decide against killing him, made me feel what an individual would feel that this decision will most likely come and bite him on the butt later in the near future.

Bizarro's characterization was also handled quite well. He has always seemed childlike, here though, it's as if he is a mentally handicapped individual knowing what he suffers from, yet smart enough to explain that he is different and that certain circumstances are out of his control. My apologies if this seems offensive to anyone, it was the best way I could describe the point I was trying to make.

I'm really enjoying this book, and looking forward to what Lobdell has in store for us next.

Art - 4: We don't have series regular Dexter Soy this issue, but Mirko Colak & Tom Derenik deliver a solid issue. I loved the way they framed certain scenes, gave it a cinematic look, almost like storyboards. This is evident with Jason's introduction at the beginning, where Jason is sitting with his feet on the table, telling the drug lords to get out of town.

I did miss Dexter Soy's crisp line work and stark shadows, but the soft approach to that Mirko Colak & Tom Derenik bought, was better suited to the more subtle side of the story, where Bizarro explains to Jason he doesn't want to be like the Bizarro's that came before him.

Veronica Gandini played a large role with her color palette this issue. Really set the mood, and complimented the washed art style.

Cover Art - 4: I like the variant a lot more than the regular cover, only because it has a moodier style, especially in the body language of the trio. However the main cover really nails the subject of the issue.