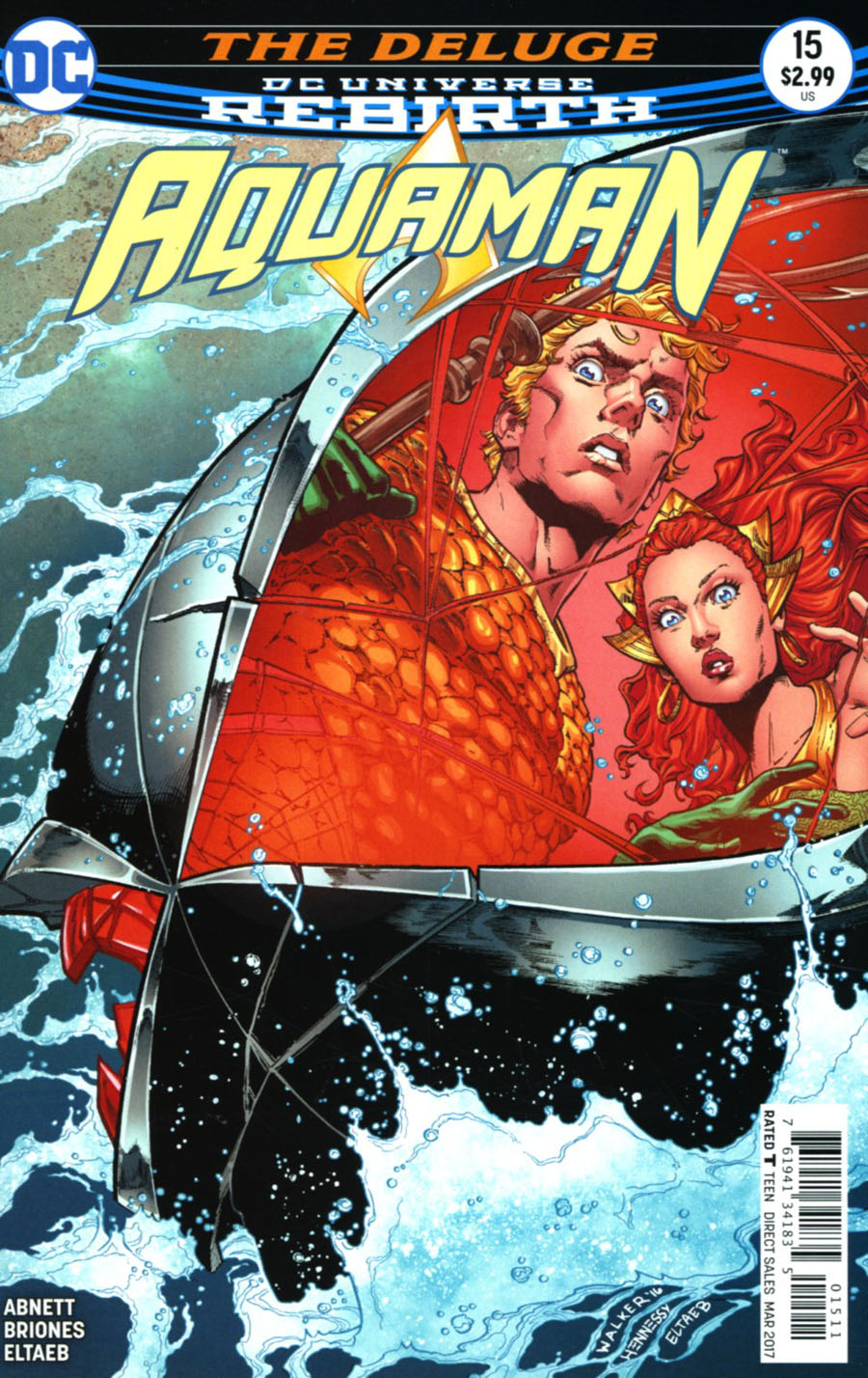 Reviewed by: Keith Samra
Click to enlarge
Aquaman has finally come face to face with N.E.M.O and their new leader in Black Manta. A massive battle erupts on the N.E.M.O ship headquarters. Aquaman beats Black Manta down with a vengeance, over all the chaos that he has caused him and Atlantis as a nation. In a final desperate attempt of hatred, Black Manta blows the entire ship, with everyone aboard. Aquaman seems to be the sole survivor.

Later Aquaman gives a full account of all that happens to President Obama at the White House, where Superman is also in attendance. He explains how the whole fiasco was to have Atlantis seem like it was going to war with the U.S.A. In a shocking turn of events, Aquaman surrenders to the U.S.A.

Later both Aquaman and Superman standing outside the White House, Superman expresses his admiration for Aquaman, and his role as king. Aquaman tells him, he couldn't have come through this without Superman's help. Superman gives him a replacement JL membership card (Aquaman used his earlier in the story arc, to use it to teleport the Shaggy Man into space). Just then Aquaman is summoned back inside to the White House, as President Obama calls a press conference and explains that a third party engineered the whole conflict between the two nations, and peace is restored.

Story - 5: A good conclusion to a compelling story, it was long in places, but it all tied together. The appearance of Superman was a surprise, but a really welcome one. As I discovered what was happening, I was just thinking to myself that it would be cool if Superman was there too, and then he was. I almost applauded, had I not been reading this with others around, I may have.

Superman was definitely a supporting character amongst many in the whole arc. From his first appearance in issue #6 to this issue, he was the one that gave Arthur the most support out of the Justice League as well as being one of the only people that seemed to believe in him. Handled with great excellence by Dan Arnett, he managed to capture the Man of Steels humility and faith in his friends and humanity. My hat goes off to you good sir.

Also that was a "boss" speech Aquaman gives to Obama, as he states he surrenders not because he and Atlantis are weak, but because they are strong. So strong, that they do not fear what others may perceive, but are willing to be seen as the losers to stop the conflict.

I like that the arc may have finally come to a close, but leaves it open for a follow up, many elements left that can be picked up on. Highly recommend this book if you're not already reading it.

Art - 5: I've loved Phillipe Briones art throughout this story. He has a really kinetic style that can deliver super charged action scenes and quite little subtle moments. Just check out the White House scene where Aquaman surrenders to the States. Superman has a raised eyebrow as he is shocked at Arthur's decision to come off as the loser in the situation. Followed by a panel below it, where Superman is smirking at just how truly clever Aquaman can be.

Phillipe Briones Superman reminds me a little of John Byrne's Superman in the face, from the facial expressions to the structure of his jaw.

The fight scene between Aquaman and Manta was really awesome. I can imagine if it were used as storyboards for live action it would really impactful.

Cover Art - 5: I like the variant cover more, I love the painted style, but in saying that, the regular cover is quite cool too.