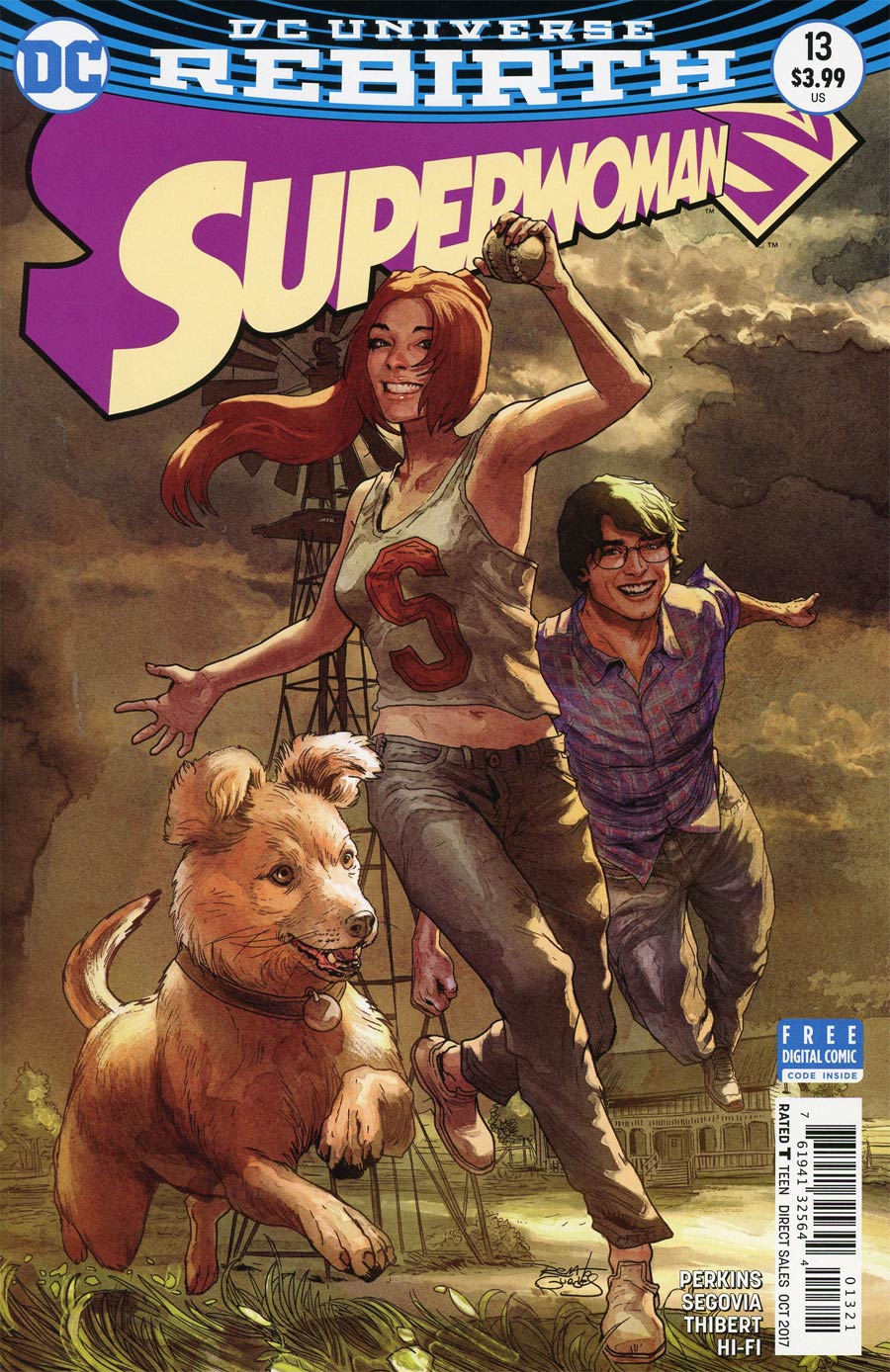 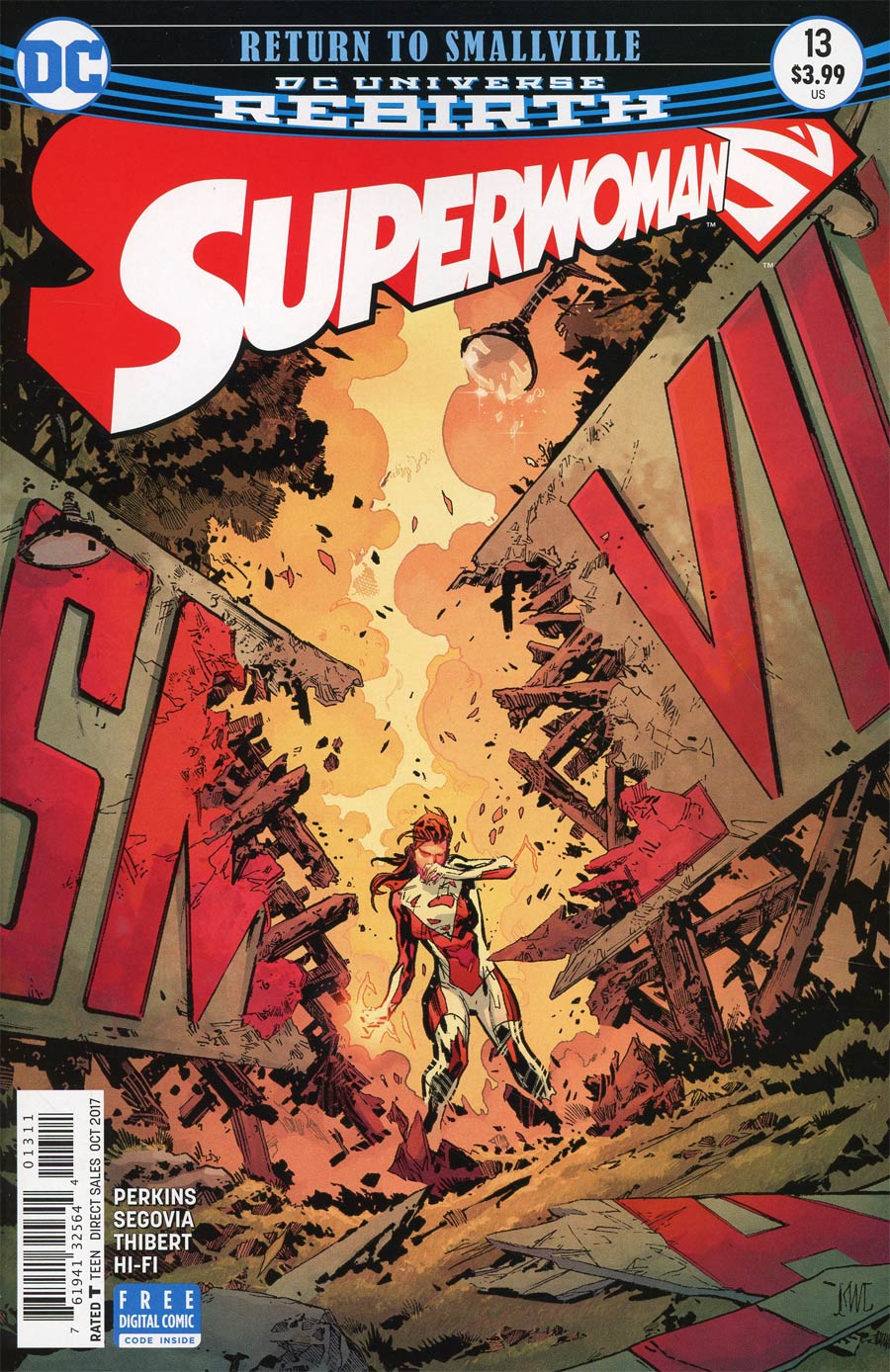 As our story opens, Smallville is on fire, the 'Welcome to Smallville' sign, the fields and a dialog that reads, "Growing up this town was my haven, my neighbors were my friends, I never thought I would be the one who'd put this town in danger".

Red Sun and Superwoman (?) are terrorizing Smallville, in their wake is devastation. Lex Luthor tries to reason with Superwoman reminding her that this is not who you are. Our hero struggles with her thoughts, she knows what she is doing is wrong, yet that part of her is being suppressed and she has no will to fight it. Lex tells her that he knows Red Sun is using Red Kryptonite to control her that she would never do this under her own accord. "Stop now or I will be forced to intervene!". She replies, "I came here to search for the source of my power, so do your worse, because I found it."

Flash back to the past where a teenage version of Clark and Lana walking to school. Clark stops to help one of the older teachers cross the road when a gentleman named Amos Aimes comes riding up on his motorcycle. His motorcycle is backfiring so Lana offers her help in fixing it as she and her Grandpa used to work on motors before he passed away. In Chemistry class Lana and Lex Luthor get into an argument over who knows more about chemistry, landing them both in detention for disrupting the class. In gym Clark tells Lana she should stay away from Amos, he seems like "a bad seed". Lana tells Clark he is being a little possessive. Knowing Lana is in detention, Clark skips class so he too can get detention, after a couple attempts, and having to insult Shakespeare to his English teacher, he finally gets his wish. In detention Clark walks in to find Lex but no Lana as she decided to jump on Amos's motorcycle and have some fun. The bike hits a pothole and Amos and Lana go over the handlebar towards the ground. A blur comes and swoops up Lana before she hits. Clark asks Amos if he is hurt and reassures him that nothing is broken and turns his attention back to Lana. Lana tells Clark that months ago she told him that she liked him more than friends, "and that just made you all weird, so now that I have moved on your jealous?" Clark replies, "Maybe I am jealous, maybe I like you more than friends too maybe...", and Lana moves in for the kiss. Clark pulls away in pain as the necklace she is wearing starts to glow red. He asks her what it's made of and she replies, "Just some rock that Grandpa found in the field".

Back to the present, Lex tells Superwoman Kryptonite is not the source of her power, "It is changing who you are". Red Sun attacks Lex and says, "I was not confident enough in high school to fight back Lex, but I am now". Lex replies, "Amos Aimes. I have been watching you." Superwoman and Red Sun continue to beat Lex down, Lana states that the necklace always made her feel stronger, so she sought out the only other person she knew who was exposed to Red Kryptonite. Lex tries to reason with Superwoman once more but she won't listen to him. She is getting ready to attack when a blur comes out of nowhere sending her tumbling across the ground. "Got your message Luthor. How can I help?" says Supergirl.

Next Issue: Clash of the Superwomen

Story - 5: Of the "Super" titles this comes in second place (right after Action Comics) of the books I look forward to each month. This issue was no exception. Seeing a younger Clark back in his high school days was refreshing and reminded me just how much I missed the earlier Superboy comics when Superboy was a younger Clark Kent. Seeing Lex there was confusing for me. I know that Post-Crisis Lex was born in the Suicide Slums district of Metropolis. Not sure when that changed, but obviously it did. Interesting note, Clark saved just Lana on the bike and not Amos. He could have easily caught both of them, but chose to let him tumble. One has to wonder, did a young Clark allow this young kid to fall because of jealousy? And speaking of Amos, making him Red Sun was a good touch, and I (as well as probably many other readers) thought it was going to be the battle of the men over Lana. But they surprised us all and brought in Supergirl for the fight. I for one can't wait for 30 days to get here.

Art - 5: Simply 'phenomenal' is the word I would use to describe this book. Stephen Segovia is without a doubt one of my top 5 current artists and this book shows exactly why. If you're not familiar with his work, I strongly suggest you pick this issue up. It is comic art at its finest.

Cover Art - 5: Stunning! Shows a great description of what is to come on the inside of the book. I find that rarely happens these days.

Variant Cover Art - 5: Last month's cover did absolutely nothing for me, but this cover was so whimsical how could you not like it? I love the depiction of a young Lana and Clark and who I assume to be Krypto. My only complaint is my Local Comic Shop did not get any copies of this one, so I hope they can order me one.