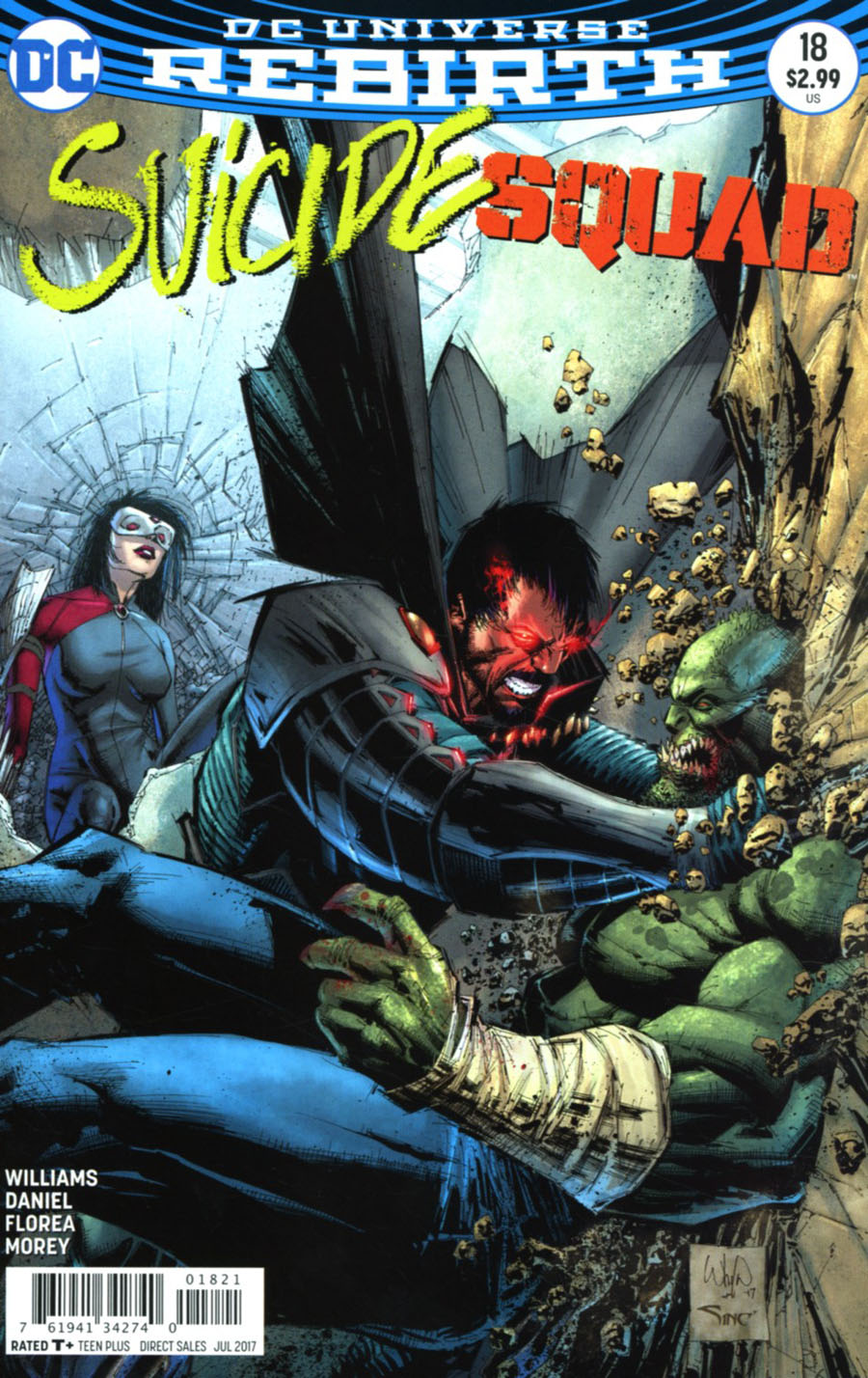 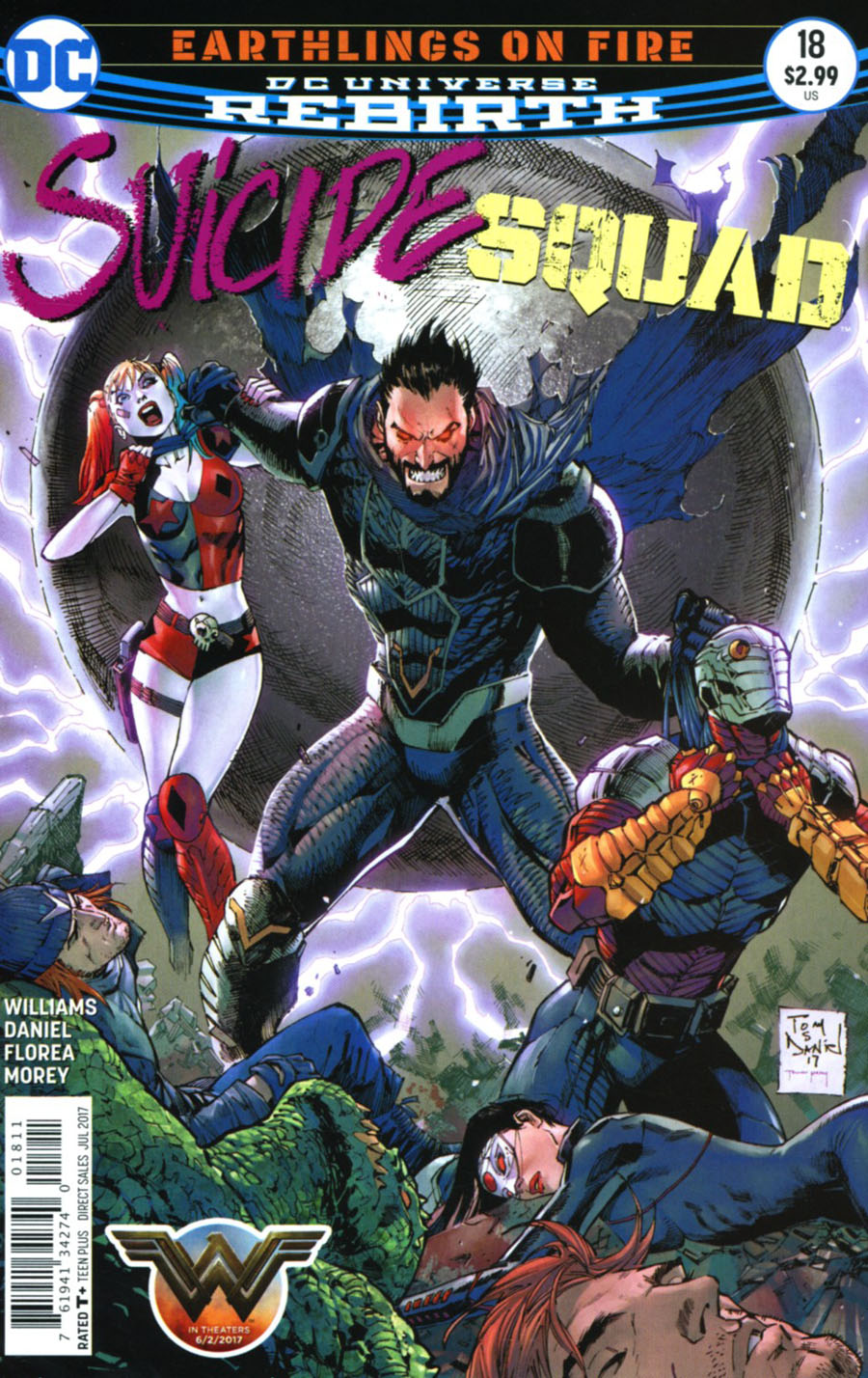 "Your Future Is Dead"

Reviewed by: Keith Samra
Click to enlarge
Zod is cutting into his head, to take out the Kryptonite Neuro-Bomb. As he gets closer, he screams in agony, and everyone at Belle Reve hears him. Meanwhile we see a small liquid-like-drip fall from the sphere that is The Black Vault.

Zod bursts through to Amanda Waller's command center, and throws the Neuro-Bomb he has cut from his skull at her feet. Zod destroys the room, making it incapable for Waller and her guards to mount any sort of defense protocol and offense against him. Zod walks toward Waller to kill her, and is struck with a boomerang to the open wound on his skull. The Squad arrives to try and subdue him.

Zod activates the Black Vault, which surrounds the whole of Belle Reve. He tells everyone that it is a doorway to the Phantom Zone, and he intends to unleash all of its prisoners, and together they will conquer the world, after he has destroyed Belle Reve and killed everyone in it.

Enchantress is the first to mount an offense toward Zod, in the vain hope that she will exploit his weakness to magic, but Zod had already taken that into consideration, and shoots her with his heat vision, taking her out of the fight. The entire Squad attempt to rush Zod, but wraiths from the Black Vault attack them. Zod is struck from behind by Hammerhead (he was captured last issue), catching him off guard. This angers Zod further, and he unleashes heat vision in all directions. Rick Flagg is struck by one of the beams near the ribs and is also taken out of the fight.

We end with the arrival of Cyborg Superman and The Eradicator...

"Zod hear me now...Cyborg Superman and The Eradicator will obliterate all who stand against the children of Krypton!"

Story - 5: As I wrote above. Read this issue when you read Action Comics #980, and you will understand why and how The Black Vault has encased Belle Reve. This issue runs simultaneously with Action #980, and is a great way to see a larger story unfold.

Amanda Waller decided to use a flame thrower in place of a match, in the vain hope she could control its flame.

Though it may feel as if this issue is one big slug fest, we do get to see what it's like when a Kryptonian unleashes his power mercilessly onto those that appose him. I love that this is a perfect example of the restraint Superman actually uses against his antagonists. Now I know that Zod could have wiped out the entire Belle Reve complex with a single explosive blast of his heat vision, but we have to remember... Zod is vengeful. And I absolutely loved Amanda Waller's reaction... "I thought... I could control him". It's not the first time something like this has blown up in her face, I mean the "Justice League vs Suicide Squad" earlier this year proved that. Some people just don't learn their lessons the first time around.

One last point about Zod I wanted to mention was the fact he almost lobotomized himself, to in order to be free from Waller. That just goes to show the type of character he is, and what he will bring to a fight against Superman in this Rebirth era.

I like that Capt. Boomerang "cast the first stone" by throwing a boomerang into Zod's brain. It's safe to say, that Boomerang can also be quite vengeful. His line "that's for blowing me off at the shins that one time" regarding his death when Zod fried him in the first arc of this book, followed by "You blokes look like you have this covered. I'll go get help" later on made me laugh. I really like that Williams has such a great handle on the character. Well not just Capt. Boomerang, but more on that later.

Harley getting it on with Rick Flagg at the beginning of the issue was something I really didn't care for. I mean Williams has told great stories with her throughout his run, but she's becoming quite the "whore" of the DCU. I apologize if that's a bit harsh, but we all know Harley is Joker's girl, even if she does seem to hate him at the moment, she will eventually go back to him. Or sometime down the track, DC editorial will most likely put them back together. They are basically like Wonder Woman and Steve Trevor, or Black Canary and Green Arrow. If we take a look at her past relationships in the last few years: She jumped at the chance quite literally with Deadshot on the Batman: Attack on Arkham animated movie. She recently got it on with Lobo in her own book, and now she is doing the nasty with her field leader. Call me old fashioned, but we don't need to set such a bad example for the younger female audience that like and follow her exploits.

Moving on, even though we barely got to see Deadshot, I loved his line "I'll stay alive Zoe... For you," while he looked at her photo, before jumping into battle. It seems now, he can't be the mercenary that doesn't care weather he lives or dies. I love Williams dialogue for every character. He's really managed to capture everyone's voice perfectly, as I was mentioning earlier, he really has a good grasp of who these characters are.

Lastly, I've been loving Williams pacing for this series. Zod was introduced all the way back in issue #1, and we are now seeing the fruit to the seeds he planted back then. I hope that this isn't he end to Zod's time on the Squad. I know it may seem that way, seeing as how he is about to be recruited into another Squad altogether, lead by Cyborg Superman. This has been a really solid series so far, and I really recommend picking it up if you are at least curious about it, or just want to read an excellently written DC book.

Can't wait to see where this goes next issue, and then over in Action Comics, reviewed by Michael Bailey.

Art - 5: As a visual storyteller, Tony S. Daniel is one of the best. He can transition from scene to scene seamlessly, and deliver high octane action scenes like no other. Though he uses a fair amount of full page splash's, the story doesn't seem to suffer for them. I've always been a fan of his work, and I've liked pretty much everything he done at DC during his time there.

I'm not sure if it was Daniel's choice, or if Williams wrote it that way, but the gaping open wound in Zod's skull, with his brain showing seemed a bit much. Especially when he gets a boomerang thrown at it... But then I remembered the scene in Superman Returns, where Superman is shot point blank in the eye, and it has no effect on him. So a boomerang to the brain may be easily brushed off by a Kryptonian I guess.

The sex scene's between Harley and Flagg weren't perverse in any manner, but they did seem a bit awkward looking. Then again I wasn't a big fan of this particular plot device, so that may have clouded my judgement.

I'm a little confused at what the liquid drip from the Black Vault on the first page was meant to represent, is it meant to be the wraiths attempting to escape or is it something else entirely? I really hope that it is the latter.

I really liked Daniel's rendition of The Eradicator and Cyborg Superman, even though it was only on the last page that we got to see them, not counting the panel with some foreshadowing earlier in the issue. I hope we see more of them and also Superman next month. If you've read Action #980, then you will know he isn't too thrilled about the idea of the Suicide Squad or Amanda Waller either.

Lastly I really need to mention something about the awesome coloring job by Tomeu Morey, a great use subtle techniques, like Harley's smudged eye shadow, and slightly pink nose on her pasty white skin, and the general skin ton on most of the characters, giving them a three dimensional look ever so slightly. Also the reptilian scales of Killer Croc, though I'm not the biggest fan of this super mutated almost abomination like look for KC, the colors make me appreciate the line art by Tony Daniel. Really good work.

Cover Art - 5: I like the standard cover by Daniel. If the Squad was to try and battle a Kryptonian, this is what would happen! Complete decimation by his hands. Good composition.