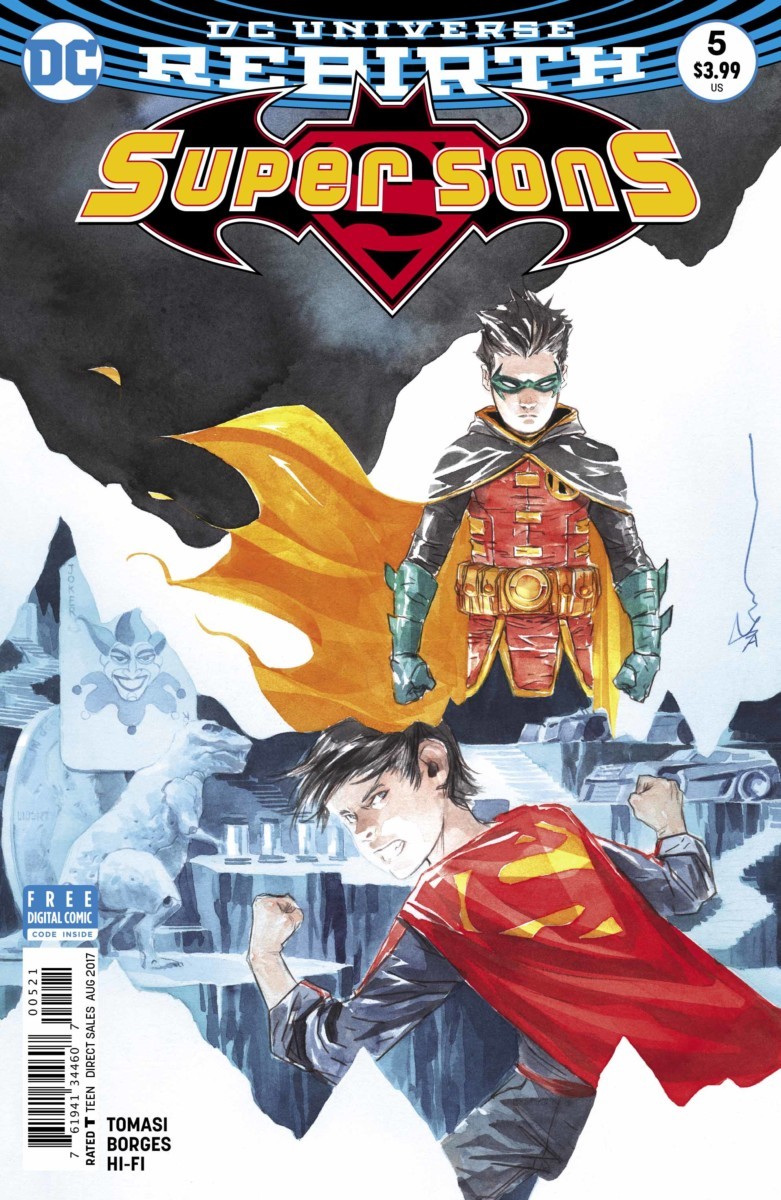 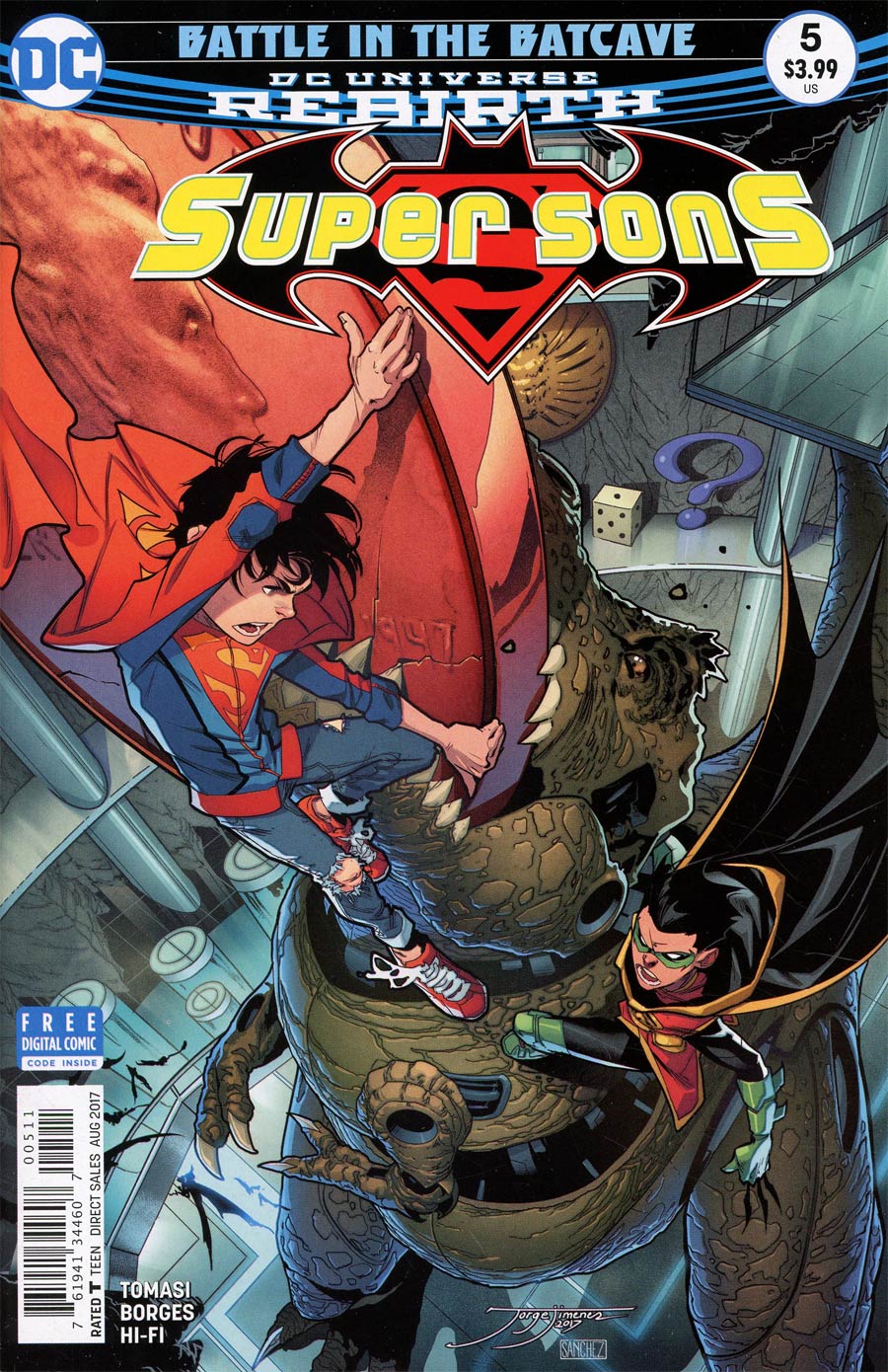 "Battle in the Batcave"

Reviewed by: Keith Samra
Click to enlarge
We open with Damien in the Batcave, bored and frustrated that he is benched by Batman and Alfred from going on patrol, for sneaking off to fight Kid Amazo with Jon.

Frustrated at his punishment and also for having to move to Metropolis, leaving his home and friends in Hamilton County, Jon lashes out at his parents and leaps away.

Soon after, Jon ends up in Gotham and makes his way to the Batcave. Once there, he gives Damien a piece of his mind, for getting him in trouble resulting in both of them being grounded. After some mocking banter back and forth, the boys start fighting with each other, one trying to beat the other.

They stop as Alfred comes down to the cave with food for the both of them. Alfred lectures the boys on getting along, and tells them that their fathers too had to learn the same lesson, and now they are both trusted allies and more importantly, friends.

Superman and Batman soon join Alfred and the boys, and Superman explains to Jon that they may be moving to Metropolis, but it will be a great experience, and that he and Lois have come to the conclusion to not make Jon hide from the world, but be part of it as Superboy.

We end with the boys heading out on patrol for the night, with a promise of adventures to come.

Story - 5: This is a great little fill-in/breather issue from the regular arcs of the series. It tied up a couple of the loose ends from the first 4 issues. Also gave us a look at the continuing rivalry and budding friendship between the boys. I love that the boys are "battling to the death" one minute, and hiding from Alfred the next. It's just an incredible dynamic between these two young characters, masterfully written by Tomasi.

I really loved the rebellious outburst from Jon to his parents, being grounded, and also being forced to move to Metropolis from Hamilton County. Being someone that grew up in the country myself, I understand how he feels. Nothing beats the open spaces of country life.

In comparison to Jon, Damien has always been an annoying brat in my opinion, but I like that Tomasi is humanizing him more and more every issue. He's kind of like Pinocchio, in the essence that he will become a real boy one day, until then, he's just a puppet to his upbringing.

Lastly I need to acknowledge the dialogue between Superman and Batman:

"Who do you think would win if we fought"?

"I think your cowl's too tight".

This is obviously a rib to the on-going feud between the fan communities, regarding who wins between Superman and BatmanŠ the answer is SupermanŠ it's always Superman.

Still loving this book a lot, always look forward to the next issue.

Art - 5: Jorge Jimenez is taking a well-deserved break this issue, he did an amazing job in the opening arc of this series. Alisson Borges provided the pencils and inks this issue, and she did a spectacular job continuing with the same light hearted feel that Jorge brings to this series. I especially love that she puts the boys in similar poses during action scenes and splash pages. Case in point, the closing splash page, when the boys head out for patrol, seamless integration of the style that Jorge has set.

It would be unfair to just compare her work to Jorge's and not mention the awesome panel work and perspective shots. When the boys battle in the cave, the action comes from all angles. Also the faces of each character really emote the situation happening in the narrative. In saying that, sometimes the facial expressions look a little wonky, but it's nothing to complain about, more of a nit-pick than anything. I also need to mention the recreation of the Jim Lee page from the Hush storyline, of the possessed Superman fighting Batman. I liked that it was done with the N52 suits. But if we go by the new continuity established in Action Comics, both of them should be in their classic looks (though I'm not sure about Batman, they seem to really be sticking to the Zero Year/N52 look).

Lastly, this may just be me, but on the page where Jon gets to Gotham, his descent from his leap looks strikingly familiar to the cover pose of batman against the lightning from the Dark Knight Returns. If it is an homage, then it's really done well.

Hi-Fi provided the palette this issue as a guest colorist, and I must say, he matched Alex Sanchez tone very nicely. Very vivid and subtle for the most part, I love that it's Technicolor all the way, incredible job.

Cover Art - 5: The main cover by Jorge Jimenez is amazing! I love the perspective shot of the boys fighting. Also love that Jorge went to town with all the cool stuff you'd find in the batcave. I especially loved the Court of Owls nod!