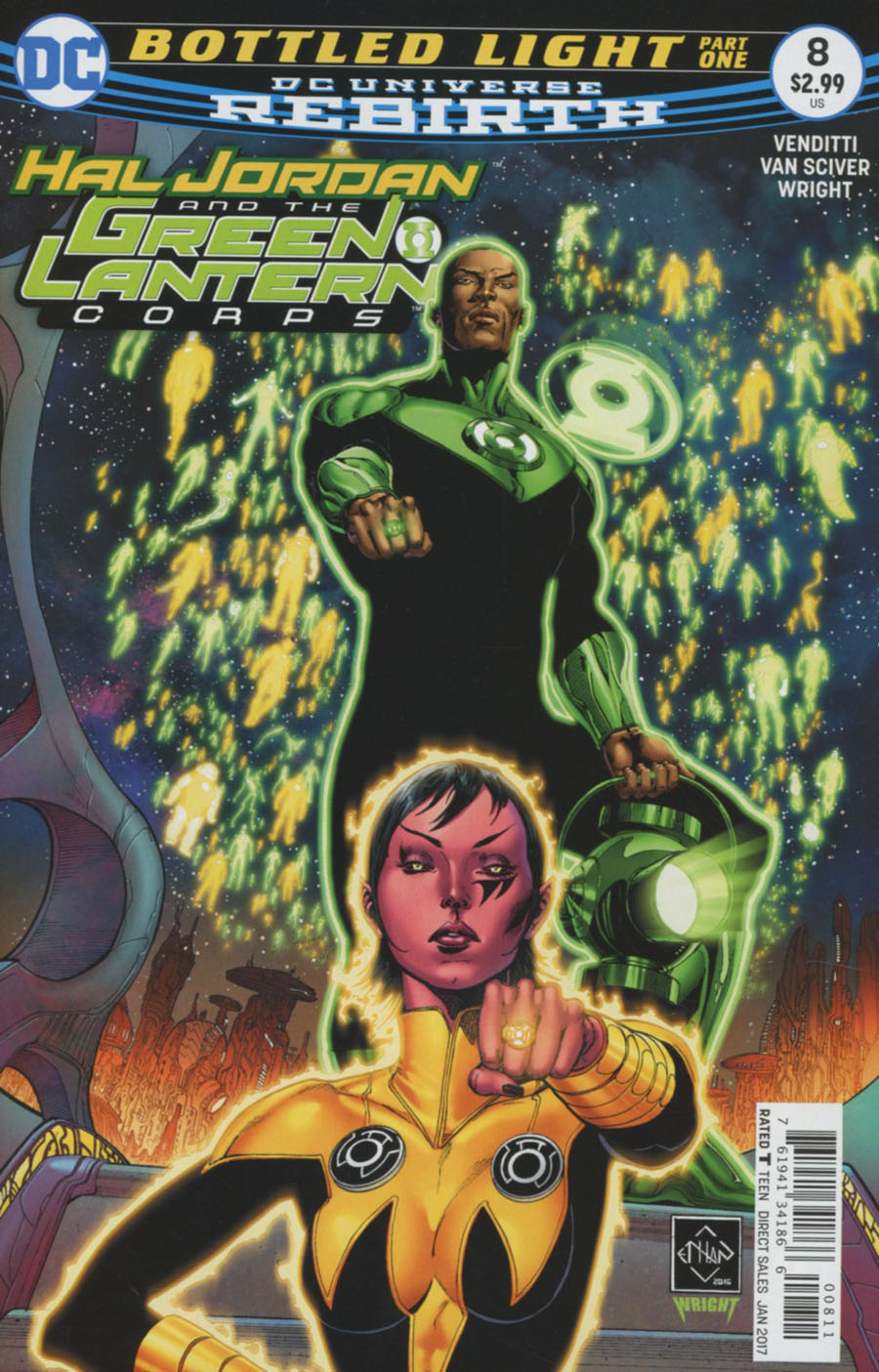 The Green Lantern Corp had vanished, leaving only 3 Green Lantern's operating in the Universe. With Simon Baz and Jessica Cruz assigned to Earth and the Justice League, Hal Jordan heads into space to stop the Sinestro Corps, which are now the dominant peace keeping force in the universe.

The Green Lantern Corps led by John Stewart return to this universe from where they had vanished to. John Stewart sends Guy Gardner out for recon, and to find Hal Jordan. Guy Gardner runs into the Sinestro Corps while on this mission, and is captured by them.

With the Sinestro Corps defeated, and their prisoners liberated, the Green Lantern Corps learn that the planet Xudar is being invaded by Starro. John Stewart leads the Corps to take down Starro, and liberate the planet, which they do, with the help of some of Soranik Natu (Sinestro's daughter) and the Sinestro Corps members that weren't 100% devoted to the way Sinestro did things.

Starro disappears mysteriously, and John Stewart, Tomar and Kilawog head into the upper atmosphere to find out what is happening. They don't get to far into orbit, when they are suddenly stopped by an unusual barrier. The stunned Lanterns look on, and wonder where it came from, when it is revealed in the last scene that Brainiac that "collected" them...

Story - 5: This book has been an excellent read so far. It started in the second phase of Rebirth. It has a non stop action ride from the first issue. Really reminiscent of Geoff Johns run on Green Lantern. Though Hal is the focal point, we do see John Stewart and Guy Gardner a fair bit.

Brainiac, a Superman villain that pretty much graduated to a larger DC Universe threat as of late. He pretty much now stands along side the likes of Darkseid, The Dominators, The Anti-Monitor, Mongul and Krona. So I was happy to see him make an appearance here. Seeing as how he is an intergalactic threat. I'm actually surprised it's taken him this long to appear in any Green Lantern title. Ironically, this is the second Superman villain to be used in the pages of Green Lantern, right behind the Hank Henshaw Cyborg Superman. (Third if we count Mongul, for all the hardcore fans).

He seems to be one of the "android" machinations that appeared in the Geoff Johns Superman: Brainiac story line from a few years back, before the New 52 started. So I'm assuming that the "Grand Collector" that this Brainiac 2.0 unit mentions will be the organic green version of the character from that story... Well I hope it is anyway.

Something I didn't mention in my recap of this issue, is that in the final page, Hal Jordan's ring flies to the planet Nok in space sector 2814. There two beings stand and witness this ring fly toward them. It is later revealed that these two are Ganthet and Sayd. With the appearance of Hal's Ring (which is actually searching for Hal Jordan). Ganthet says that their time of exile has come to an end. The Guardians have been largely missing from the two Green Lantern books that DC is publishing right now, since Rebirth. So it will be interesting to see these two take a role of any proportion.

I'm really excited to see where this story arc will lead. Brainiac is one of my most favorite villains in the DCU, and I love that he has turned up in one of my other favorite books right behind the Superman titles.

This title has been a really fun to read so far. So please take a look at it, if you're curious at all about. You wont be disappointed, I promise.

Art - 5: The art in this book has been stellar so far. Every issue is a feast on the eyes. And in the case with this issue, I must say, Ethan Van Sciver truly is a modern master of comic book art. His level of detail reminds me of Brian Bolland's art, and his high octane action scenes are full of energy that can rival the greats like John Byrne, Jim Lee and George Perez.

Obviously my favorite moment was the reveal of Brainiac. Especially this robot look/version. It looks like it literally stepped out of the 80's Super Powers era. Maybe that's why I loved it so much. As the Super Powers Collection is my most favorite action figure line of all time. It was my doorway into the larger DC universe. And where I first learned of characters such as Green Lantern and Brainiac, falling in love with them instantly. For it all to come full circle in this book was absolutely a joy to behold.

Van Sciver's signature detail is peppered in the entire book, the best example are the other bottled up creatures and cities in the background of the Brainiac scene. If I could own the original art for this page, I'd die a happy man. I loved it that much. Go check out the book just for this page alone, you wont be sorry.

Jason Wright does a great job on the colors, and without them, I don't think the book would look as sharp and vibrant as it does as it does.

Cover Art - 4: The cover is really attractive, with a good composition. It falls a little short of epic for me, but its still great.

The Kevin Nowlan variant featuring Hal Jordan is good also. I prefer the standard cover to this one though.