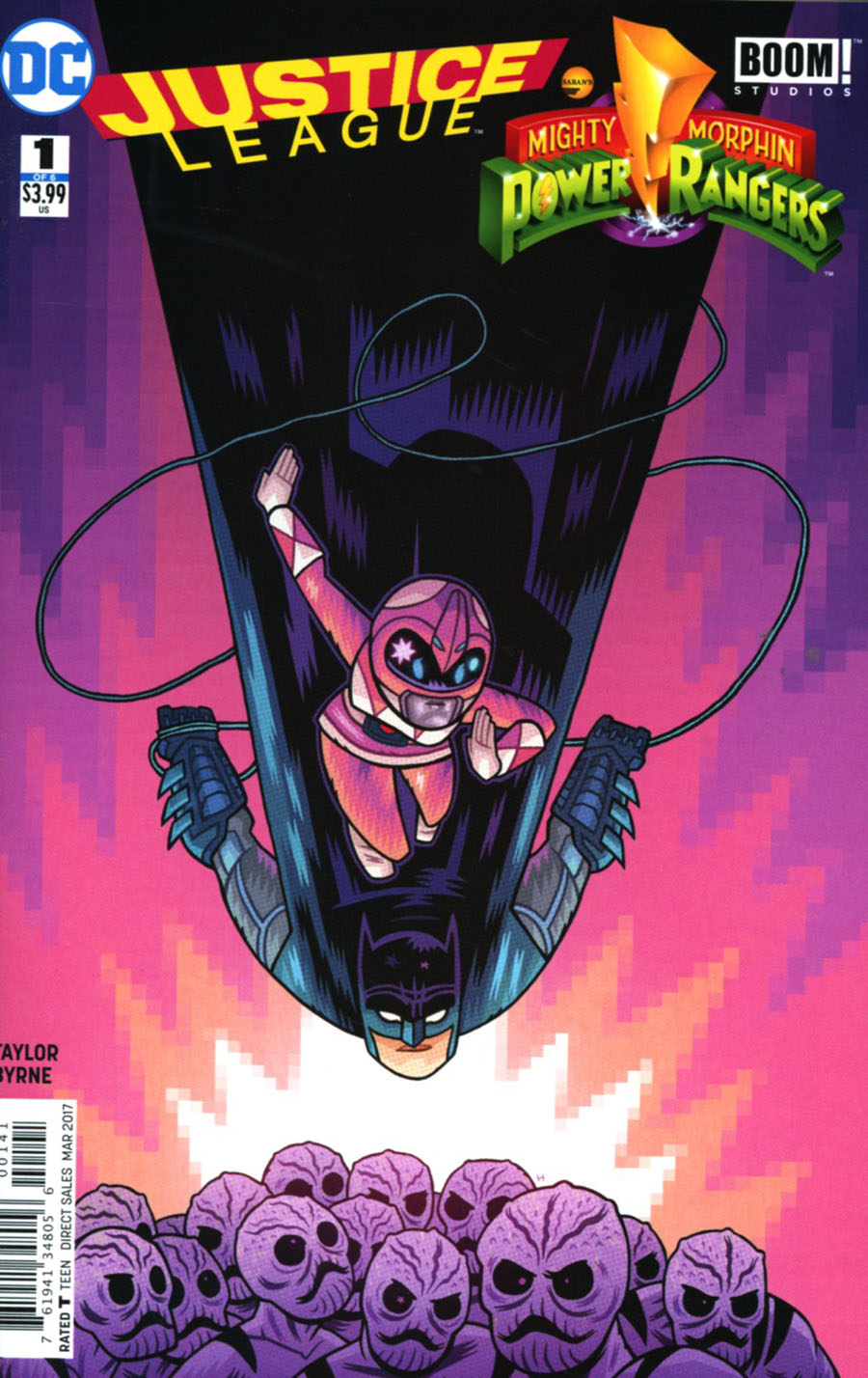 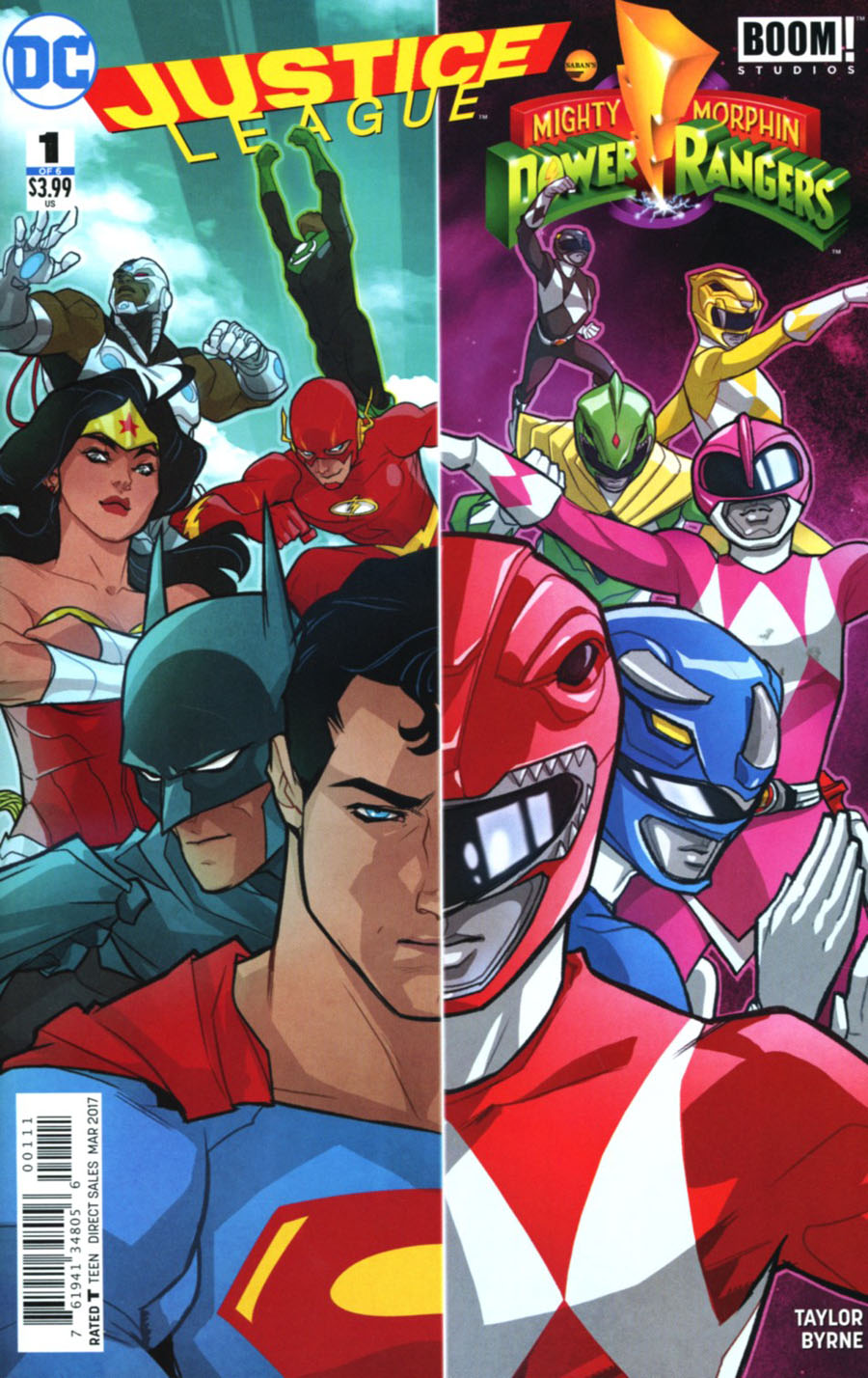 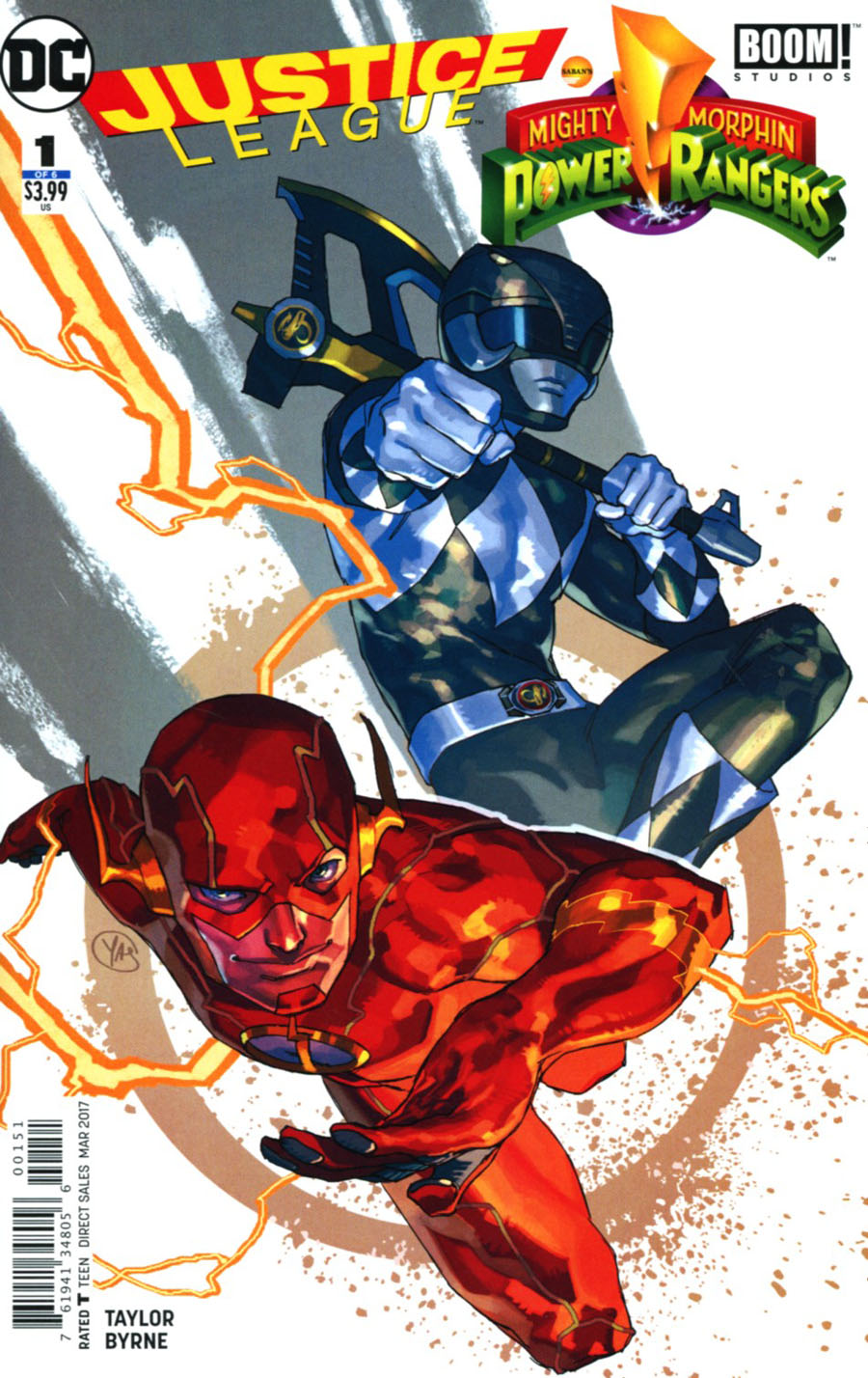 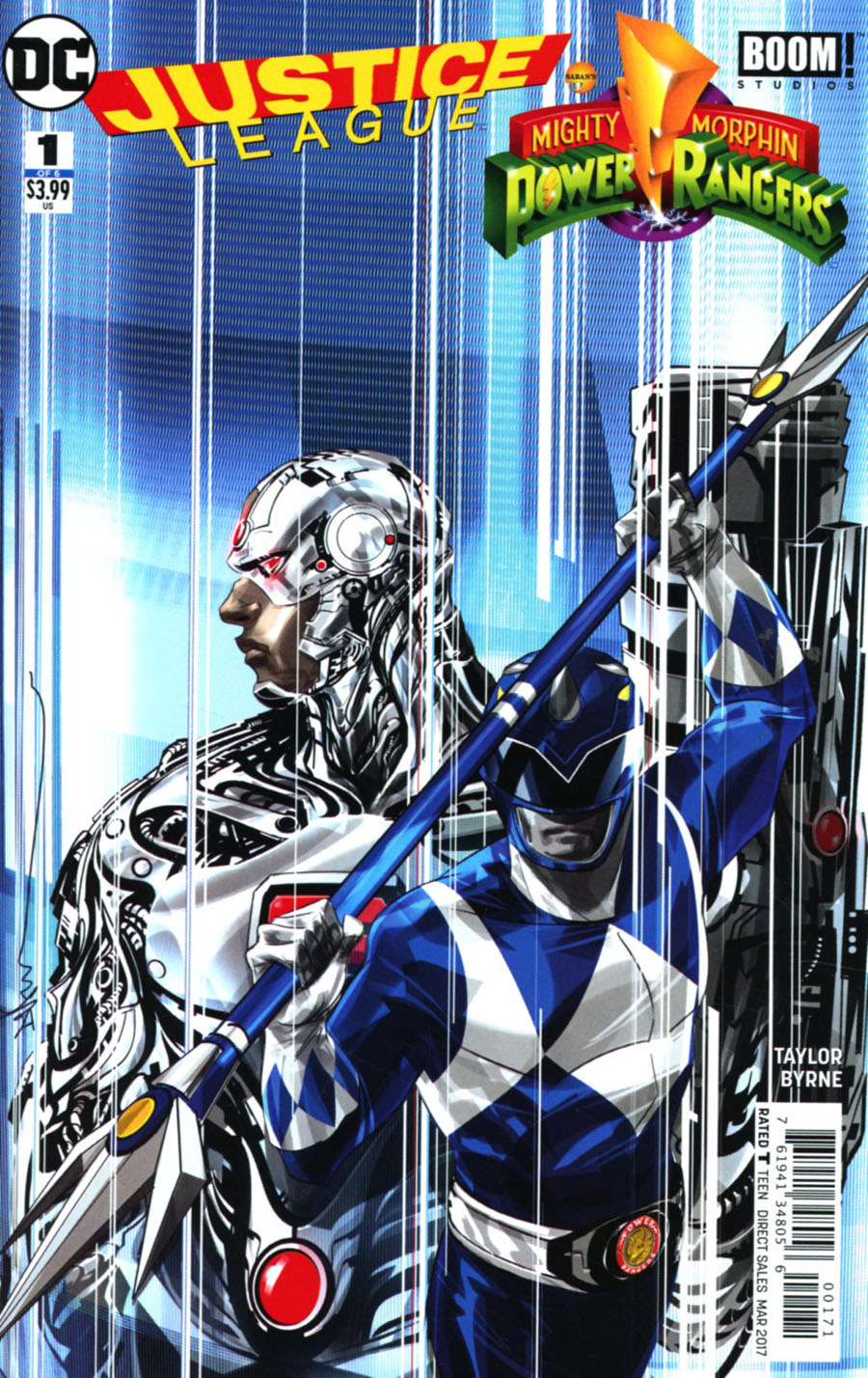 We start in the present, as something catastrophic has happened to a town on the Power Rangers' Earth.

We then flash back to 36 hours ago on the Power Rangers' Earth, as the rangers are sent to find their robot helper, Alpha Five. The Black Ranger named Zack finds him, only it turns out to be a trap set by the Power Rangers enemy Lord Zedd. Zack manages to teleport Zedd away, but the teleporter is malfunctioning, and Zack and Zedd end up in Gotham City on the Justice League Earth.

I fight ensues between Batman and the Black Ranger, when the rest of the Rangers turn up, and begin to beat on Batman, thinking he is one of Zedd's minions.

Batman calls for help, and the Flash turns up. Flash and Batman start to get the upper hand, when the Pink Ranger calls forth her Zord, and carries of the Batmobile with Batman in it. 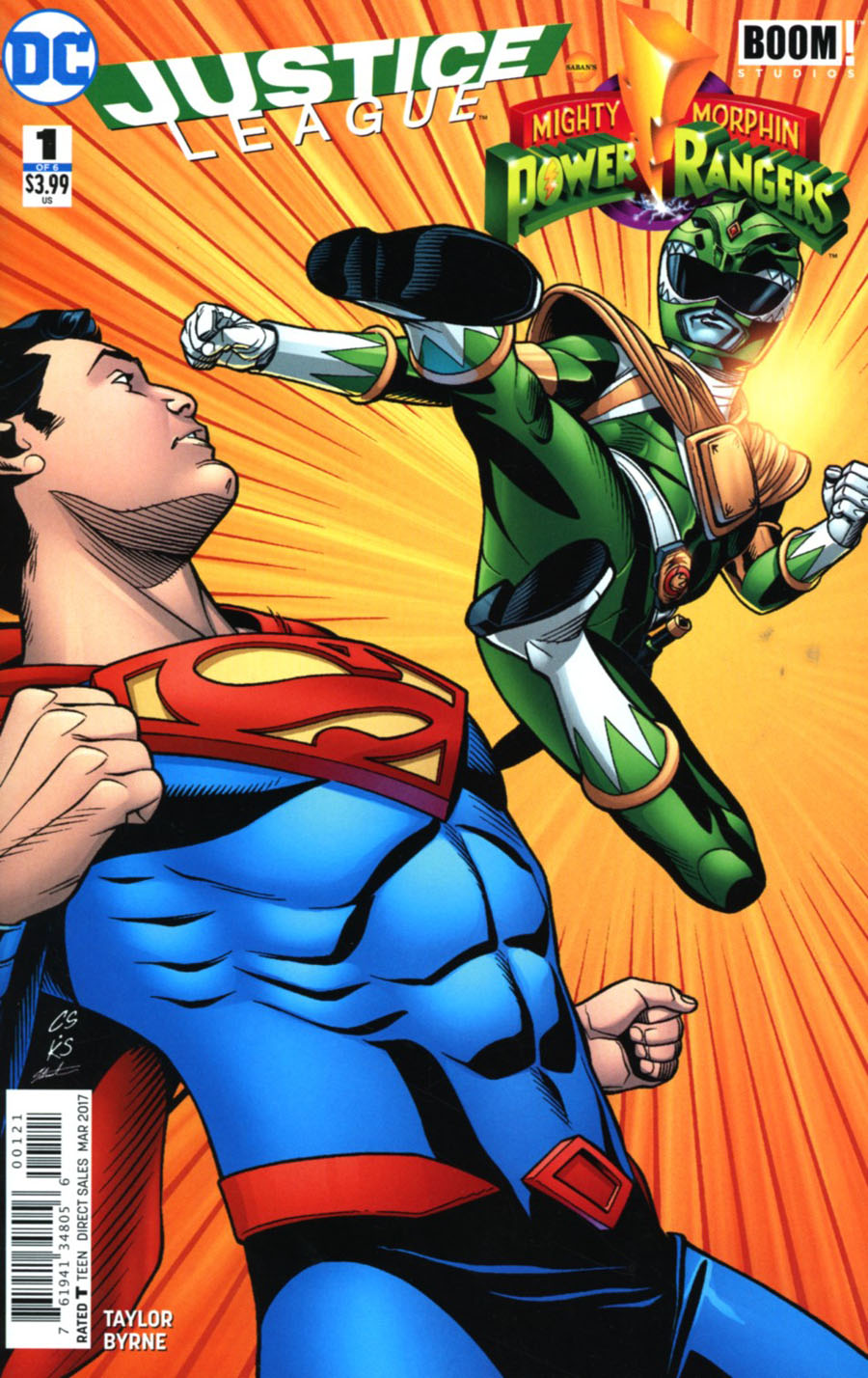 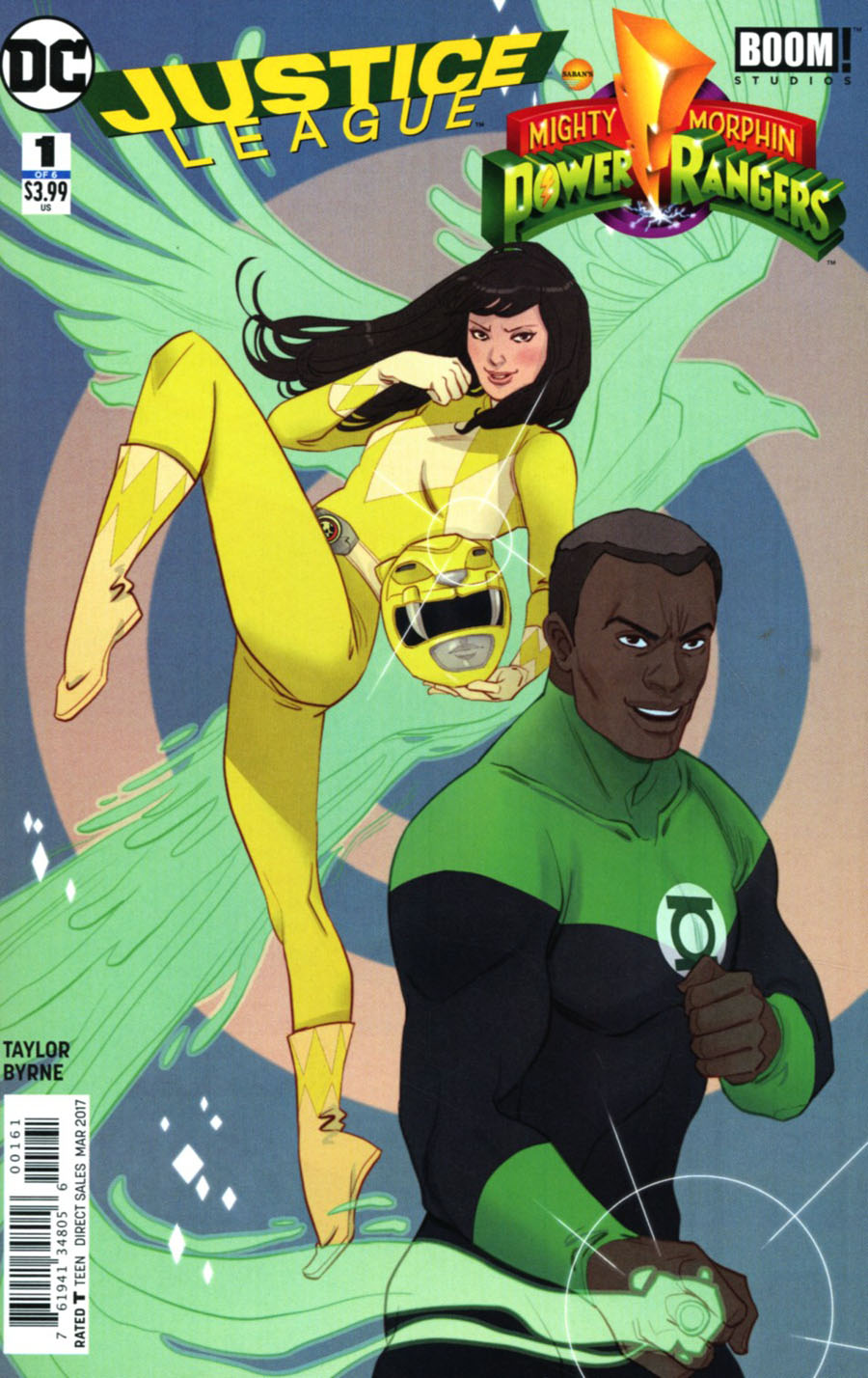 Story - 4: I may not be the best person to review this, as I don't know too much about the Power Rangers. I watched them when I was very young in the 90s, after that, network television here in New Zealand didn't play them on free to air TV anymore, due to parents claiming that it was too violent. So I am going off of what I remember as a child. To me the Power Rangers always seemed like the live action "Kung Fu" versions of Voltron. They were entertaining nonetheless.

Tom Taylor here seems to have gone back to the very early iterations of the characters, the ones that appeared in the first season of the American version of the show.

As an inter-company crossover, it was as basic as they come. The two protagonists cross paths, and there is a misunderstanding... And they fight. I guess hoping for something different may not have worked in the schematics of inter-company politics.

Good to see Superman at the beginning, but as usual, Batman is the frontman for the JL, with the addition of the Flash. 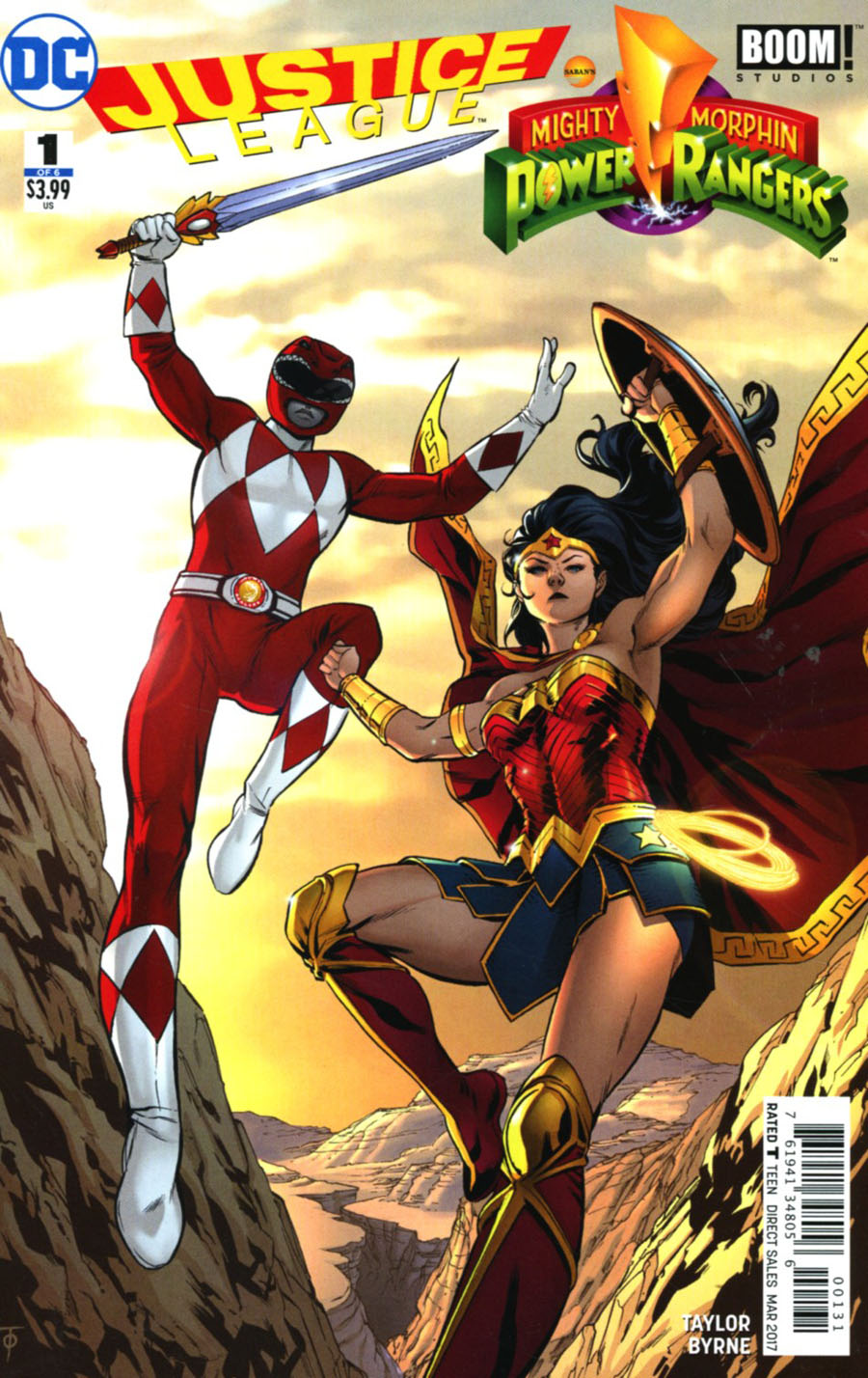 Art - 5: I have a lot of respect for artists that take on more than one task. Pencilling alone is hard, inking and coloring is a whole other level. Steven Byrne takes the home the win for sure!

He has a good style. Very unique and tidy line work, coupled with vibrant colors. He definitely knows how to capture the tone of the DC characters, and gives the PR vividness.

I liked his Superman shot at the beginning of the book, but I loved that he managed to give him his traditional red boots, instead of the blue ones with the red trip he's been sporting since rebirth. Hope these stick for the rest of the series at least.

Though I was originally hoping Karl Kershl, who does the covers would grace us with his art for the interiors. I am pleased with the Byrnes work. Good job sir.

My only complaints are that some of the action scenes seemed a little flat and lacked pizazz. And that you can get away with a lot more on a comic page than you can on screen at times. So a little more detail on the Rangers costumes and the Zords would and could make it better.

Cover Art - 4: I think they over did it with the 6 variants, excluding the main cover. So I graded them all together. Some were good, others were less than desirable. Other than the main, I think I liked the Cyborg and Blue Ranger one the best.