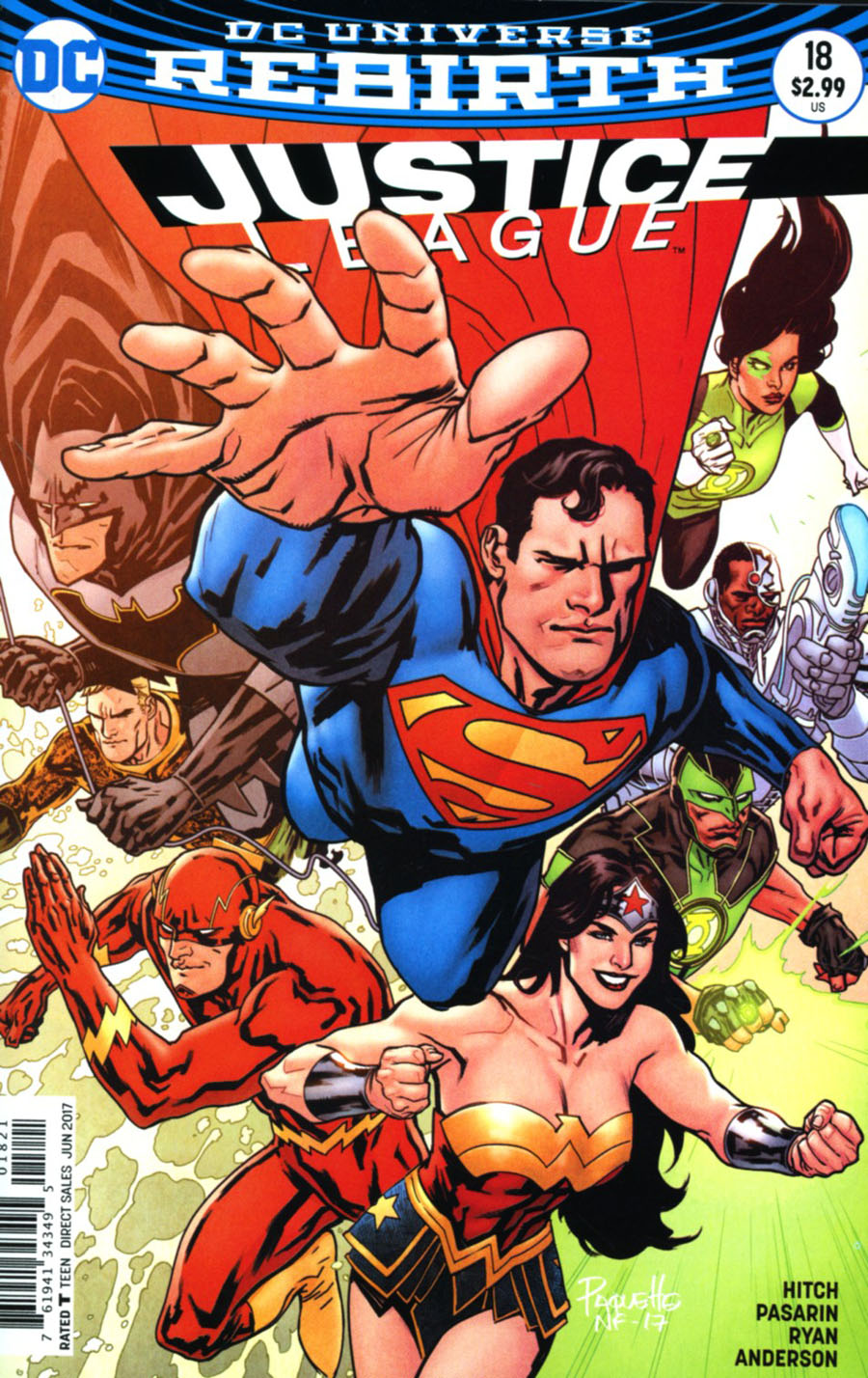 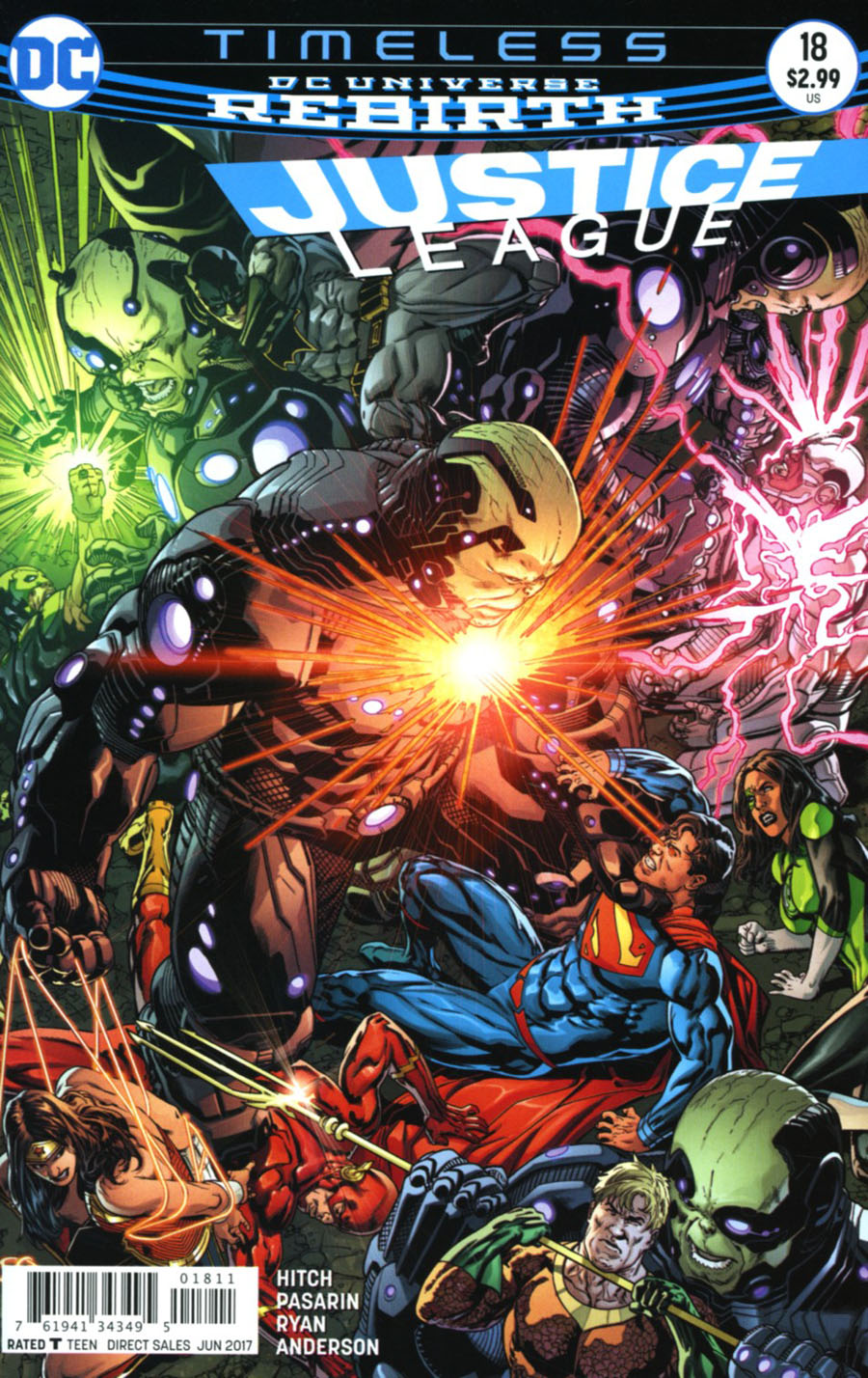 The Timeless continue to contest the Justice League through time. However, the Batman provides aid to Superman, who is then able to free himself of Tempus, while the remainder of the League is aided by this action across their respective timelines. The League enacts measures to ensure the timeline, but have only guaranteed a new threat that wants to eradicate every superhero super-villain on the planet.

"Timeless" has rolled from a Justice League tale, to a World Finest story. The rest of the League have been assigned ancillary roles, thus far, while Superman and Batman carry the lion share of the story. It's not a tale that we haven't seen before and we are reminded of that every step of the way. The omnipotent force, with endless minions should bring films like The Matrix: Reloaded or Superman: OWAW. What's more, the advent of 'Superman Reborn' has robbed the story of a large part of its thrust, since Superman is exactly what Tempus accuses him of, reshaping reality to cement all of Tempus' concerns. What we're left with is yer another attempt by Hitch to tell his own Moby Dick through the Justice League of America, but, once more, he is hindered by problems beginning with "R". First it was "Rebirth," now it's "Reborn". Hopefully there is enough in the tank for story to still be rewarding, but it's a dubious prospect as very little has occurred in response to the magnitude of the situation. Time is being tampered with, and the League place little gadgets in big machinesŃ problem solved. Add plot twist and stretch for one issue.

The biggest disappointment was Superman, but I wasn't to surprised. Where it would have been great to see Superman wreck shop, I knew it was unlikely. Red Solar radiation keeps Superman from recharging, but we've seen Superman go days without recharging. Hitch portrays it so red solar energy drains his power, and within seconds, from a fully powered Superman. Of course the Batman saves him, and a sprinkling of yellow solar energy, for a hot second, restores Superman with astonishing speed. Both instances are nonsensical, but that is where Superman is these days. While there is a great focus on his character, and rightfully so, there is no desire to be accurate with his abilities. Why you ask? Superman can do anything, and that's off-putting to many writers. The biggest fear is that letting him out of pocket would mean having to write him as big as he is. Perish the thought.

Art - 4: The scowl continues. There are some nice touches this issue. The gradient used with Superman and Tempus is executed well, giving a time dilated effect, and the detail on every page is rendered clean and crisp, without looking busy. However, Superman still has a ridiculous look on his face, that makes his words seem insane. A wide open mouth and fiery eyes state calmly, "Now, let's go find my wife and son".

Cover Art - 3: Cover watch continues, with a shot that is representative of nothing that transpired within the book.

Variant Cover Art - 3: Why does Wonder Woman have the biggest bicep?