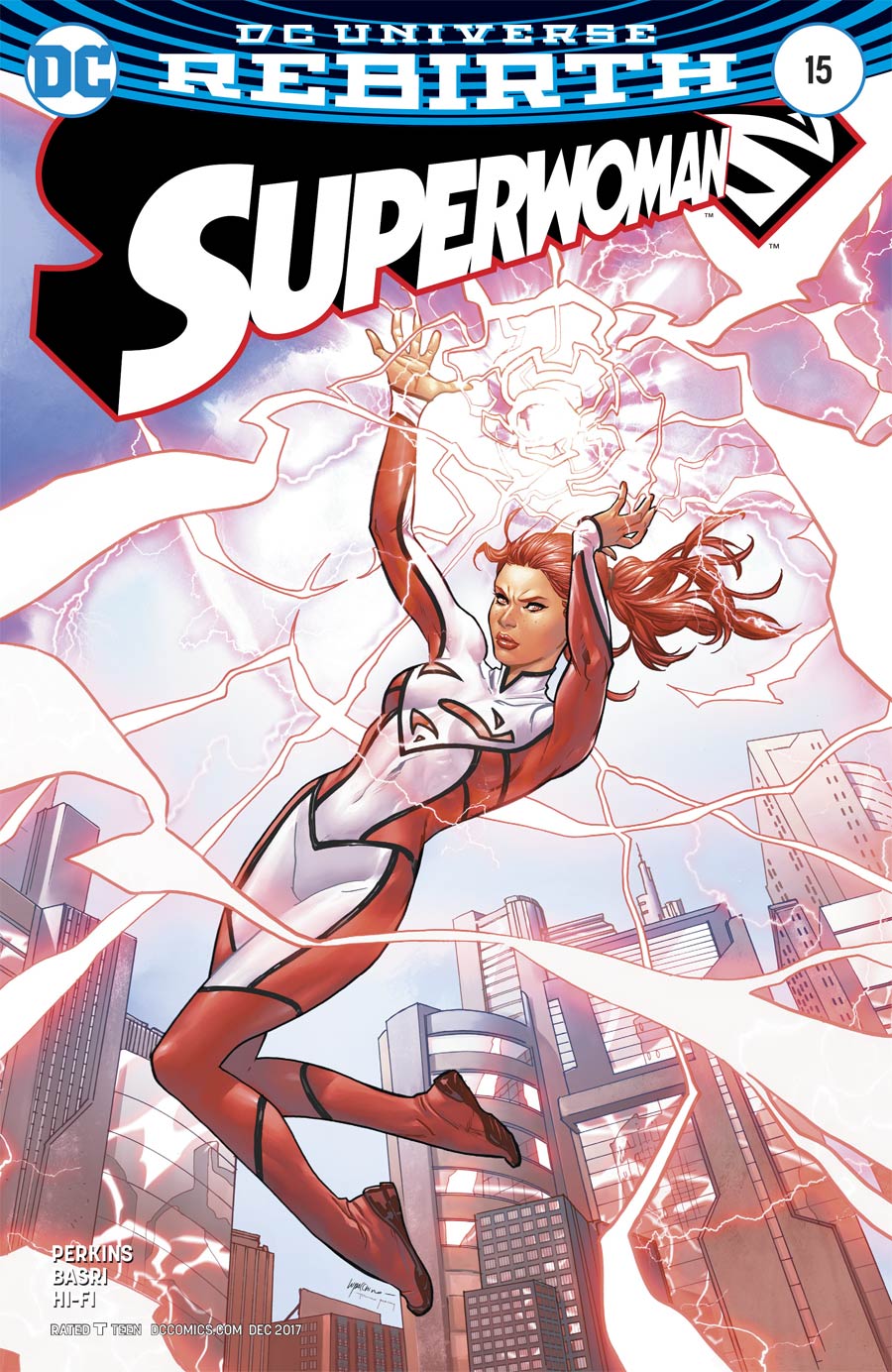 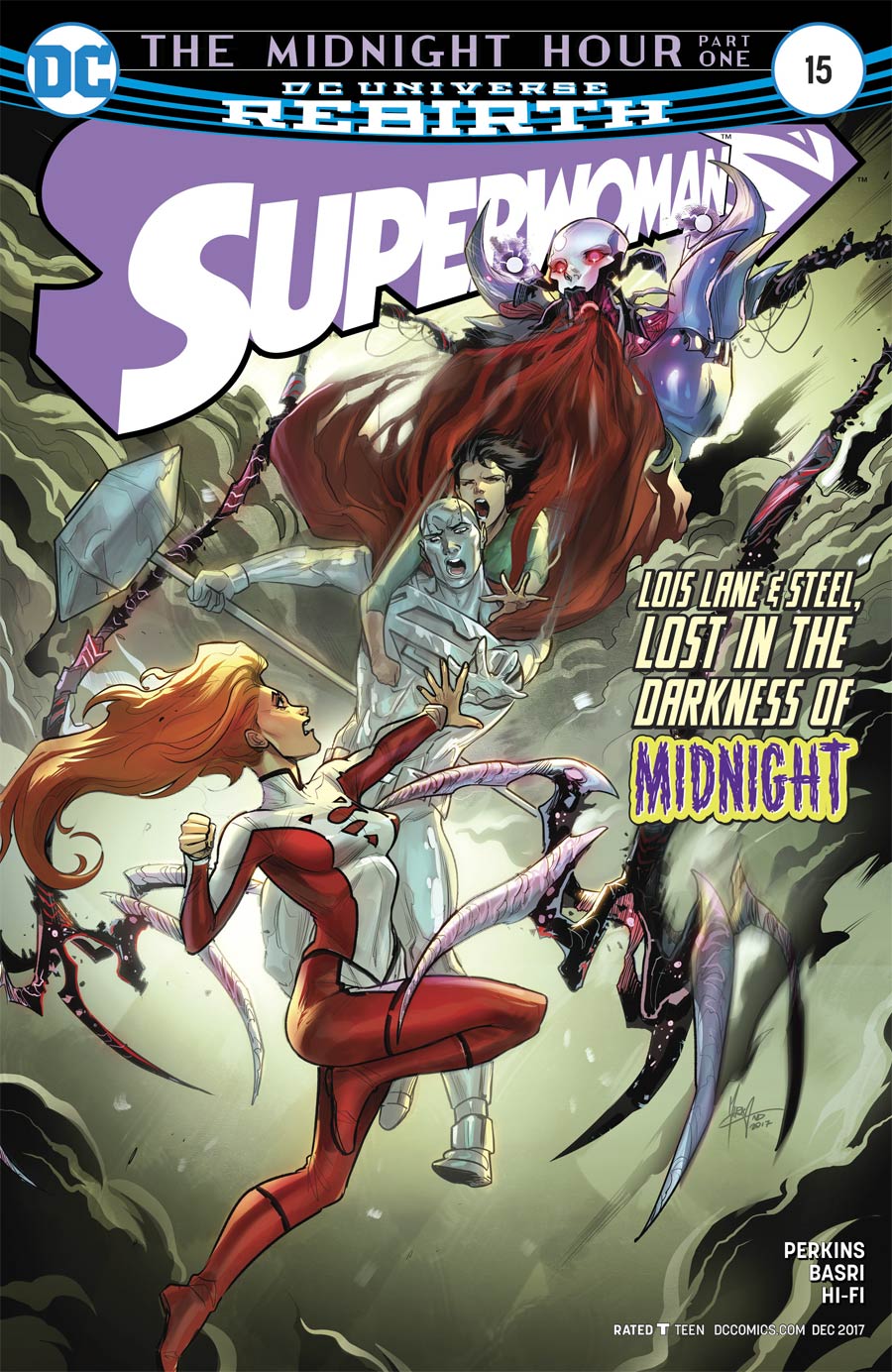 "The Midnight Hour" - Part One

Lana sits at her desk at the Daily Star going over the events of the last few issues and where she got her powers from. "This is just who I am", she says to herself. At the Metropolis Transit Authority, an employee roams the hall upset that he once again has to work the midnight shift. He sits down at a computer when something comes out from the screen and pulls him in leaving behind a trail of zeros and ones. Back at the Daily Star, Lana's boss tells her she is working too hard and it's time to go home.

Lana is releasing some built up frustrations by blowing up old outdated training tech when Lois shows up to check in on her. Lana is happy to see her but realizes John Henry must have called her. Los confirms he did but was in the neighborhood researching a missing person's story and was in the area. Lana confesses that everything going on, her Job, John Henry, her friendships, being Superwoman is overwhelming. Lois tells her she's tired and needs to take a break.

At Steelworks Lana and company notice a series of black dots appearing on a map across the city. The crew seems to think they might be black holes, then Lana remembers Lois' missing persons story.

At John Henry's apartment Lois comes to check on Lana, who hasn't been home in a few days. The two are attacked by a mysterious black cloud. It says that John Henry is strong and needs to be taken so it decides to go after Lois first. Steel grabs Lois and flies out the window, but the Black Cloud catches up to them and takes Steel. He has no choice but to drop Lois but tells her to find Lana. A broken and bloodied Lana appears at Steelworks and says, "...taken John... help me..."

Next Issue: Midnight is Upon Us

Story - 3: I really wanted to like this one, and it was on the cusp of getting 4 shields, but upon my second read through I came to the conclusion that nothing really happened, and the way Lana is talking, it appears the rumors of this book coming to an end may be true. I can only hope that in the end Lana aka Superwoman is still around as a supporting character and not just forgotten or worse.

Art - 3: A tale of two books this one is. In the beginning, I felt this book looked rushed and it was destined for a much lower score. It certainly was no where near as good as Segovia's last four issues, but as the book progressed, I either got use to the mediocrity or it improved and after looking at it again, I side with the latter. The last page of Lois standing (barely) was gorgeous.

Cover Art - 2: Seriously who green lighted this as the cover of choice? It earned a whole extra point for the, I guess, watercolor effect that was used, but if not for that, this would be a 1 all day in my book. The facial expressions are just ridiculous and Steel is a good sized man, and when he wears the armor is even bigger, but compared to Lana, he looks anorexic. If you can find the variant cover perhaps you might want to pick that one, let's find out.

Variant Cover Art - 5: Yes, once again Emanuela Lupacchino delivers a stunning cover, while not as great as last month's close up. This cover is gorgeous and should be the one to buy if you can find it. I think it is strange how most variant covers are outshining the talent on the standard covers. I am hearing rumors, that in January the multi variant cover thing is coming to an end. While I am glad to hear this for my wallet's sake, I hope they retain a lot of the variant cover talent for the main covers going forward.