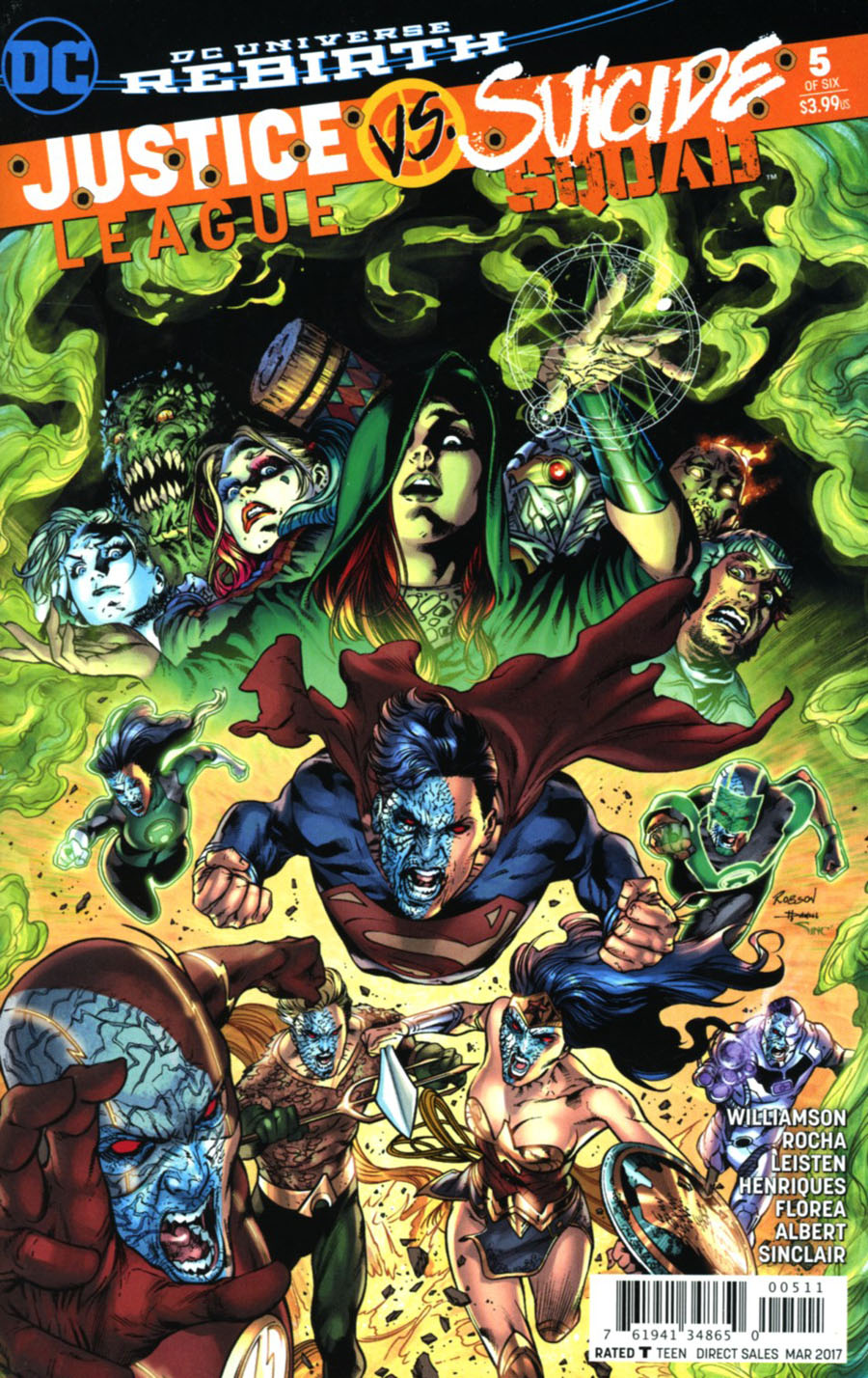 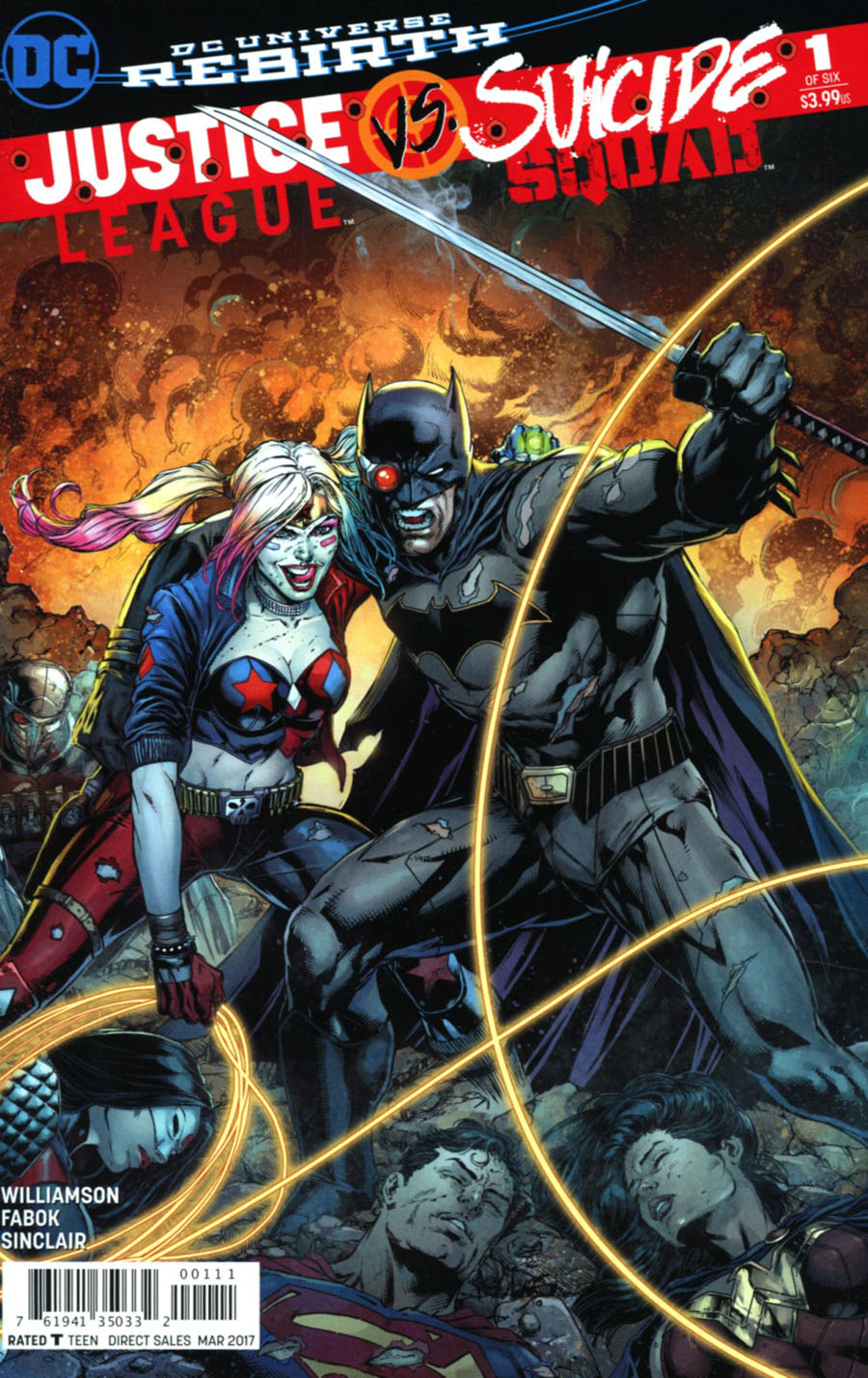 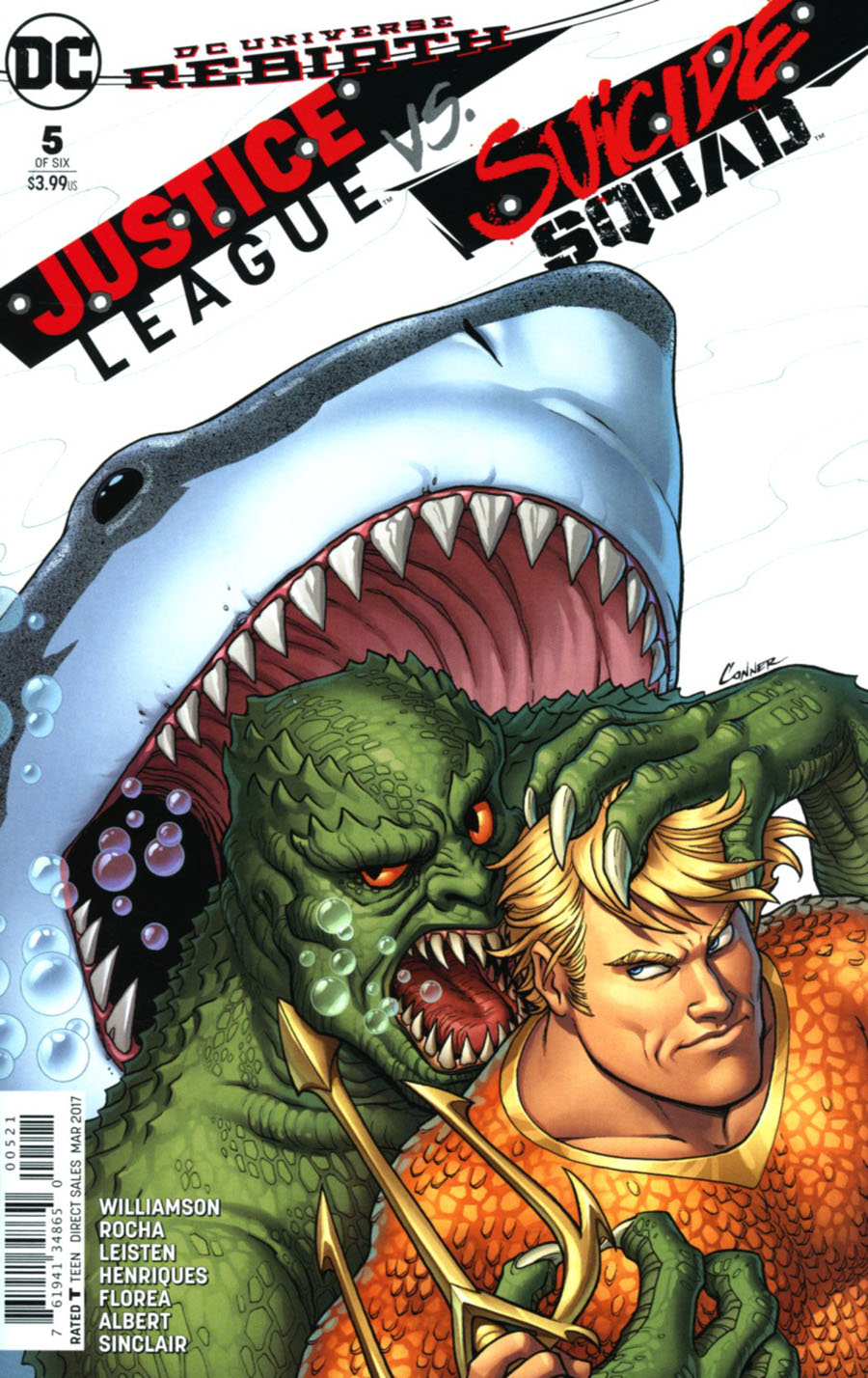 The Justice League under the control of Eclipso's gem and Max Lord's telepathy, have taken over the Earth in a matter of mere minutes. Superman flies Max Lord to the White House, where Max declares "The United States is Safe".

Back at Belle Reve, Batman claws his way out of the rubble left by the League, when they fell under Max control. Superman returns to the prison, only to fly off with Amanda Waller, taking her back to Max. He warns Batman not to follow them.

Lobo revives, and now free from Max control, helps Batman find the rest of the Suicide Squad, who are battling a half controlled Cyborg. Cyborg fills them in on whats happened, and Batman recruits the Squad as the new Justice League, and go to Washington to take out the League and Max.

Story - 4: And there it was, the twist that I knew that was coming. I expected that Max would possess the gem, and then have to be taken out by the underdogs. But I never thought that the final "boss" level villain would turn out to actually be Eclipso himself. I try to avoid spoilers at all costs, so I really wasn't expecting the cliffhanger at the end. I actually thought that Batman would lead the Squad to fight the League, and everyone would team up to take down Eclipso/Max... Or "Lord Eclipso"... So the last few pages were a nice surprise.

Hands down though, my favorite moment this issue was Superman slapping Batman away like a bug. Was a nice bit of writing, having Kryptonite be nullified while Superman is under the gems spell.

Small bits of dialogue such as "Dibs on Aquaman" by Killer Croc were a highlight, over the out of character moment of Lobo letting Batman just walk away and give him orders, after having blown up his head last issue. Lobo wouldn't just roll over like that... Then again, this is the "Marvelized Wolverine" version of him.

It was good to see Cyborg have a moment to shine here. I like that his digital side couldn't be controlled by Eclipso. Just really wish that Aquaman had the same also.

Williamson so far has written a good story, the stakes seem to be getting higher and higher with each issue, and with only one issue to go, I hope that there is a good resolve. Which leads me into my next point... Consequence!

Once this is all done, I want the world to remember that the JL pretty much took over the Earth. I know that in the New 52 world, people didn't really trust the heroes, but here is good reason for them not to have faith in these guys. Also, I hope that the SS get some form an incentive or a resolve of their own. I hope it's more than reduced sentencing or at least some form of consolation prizes... Like a cappuccino machine or a flat screen with BET... Back to my main point, there needs to be some form of consequence or a shift in the status quo. Because if there isn't, then this was just a meaningless event, that serves no purpose, like many that came before over the years. But for it to be remembered in years to come, there needs to something that comes after all this, and not just a spin off Justice League team.

I did write a little something more for this issue, but I feel that it may be more appropriate for the final issue. So I'll leave it here and move on to the art next.

Art - 4: I must say, even with a different artist on each issue, the art in the series so far has been stellar. However, with so many different inkers this issue, the consistency of the art was shaky at best. Robson Rocha is an excellent artist, and I've enjoyed his art on Green Lantern so far. So I was really excited that he was pencilling this issue. But at times his crisp and polished pencils were overshadowed quite literally by whoever was inking him. Sadly some of the inkers weren't a good fit for his art.

That being said, I liked the way Rocha used shadows on a lot of the League's faces, as well as the wrinkly look he gave their infected faces from the Eclipso gem.

Superman looked strong, so I was pleased with that. Especially the scene where he throws Batman around. The fighting stance that Batman takes whilst wearing the Kryptonite ring really made it look like he was ready for a fight, and could take Superman down. Nice to see Superman dominate him with just one hit for a change!

I like Rocha's Lobo, looked very on character, even if the writing for him wasn't... Sorry I know that sounds a little pithy.

All the characters had a certain flavor to them, in their faces and body language, but the best scene would have to be Max spewing the black vile from his mouth, then transforming into Eclipso himself.

Another small detail, But I thought the cut he gave Batman's cape was very unique. I actually would love it to actually look that way from now on.

Lastly I'm really liking the look of this new Eclipso. There is some traditional design elements and some new details. Still looks like Eclipso to me though.

Alex Sinclair's colors have been the most consistent thing about the visuals this series, and they tie the tone of the series together really well.

Cover Art - 4: Superman flying toward us, front and center, this is what really caught my eye. The rest of the cover really reminded me a lot of Giant Size X-Men #1.

Variant Cover Art - 5: Again, not that exciting for me, looks too cartoonish yet again. More comedic than anything.

Variant Cover Art - 5: An Andy Kubert cover featuring Killer Croc and Aquaman, how could it not be good?!