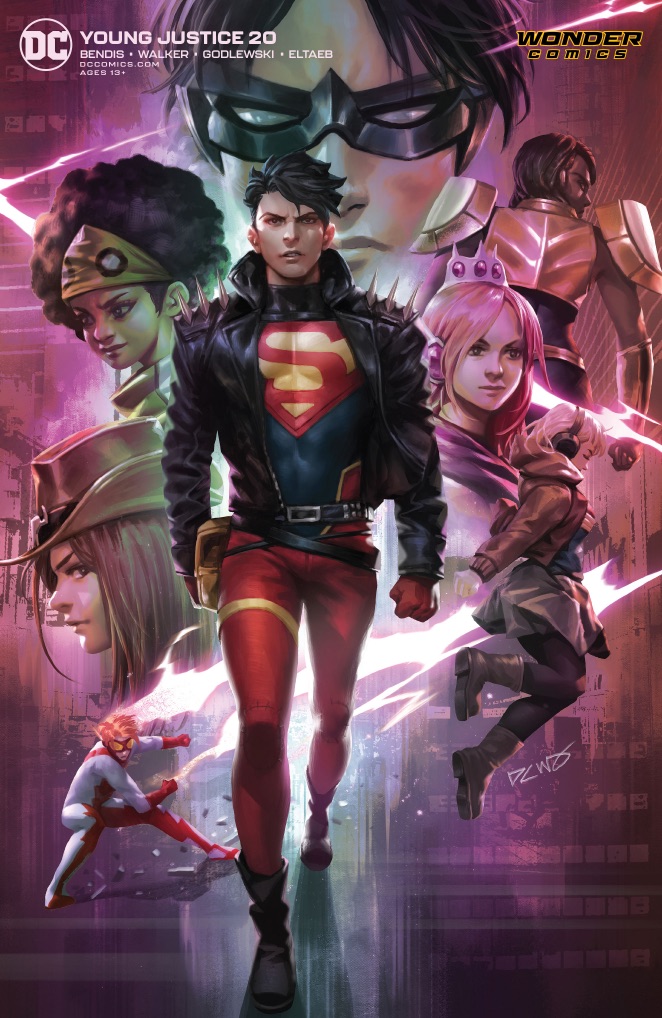 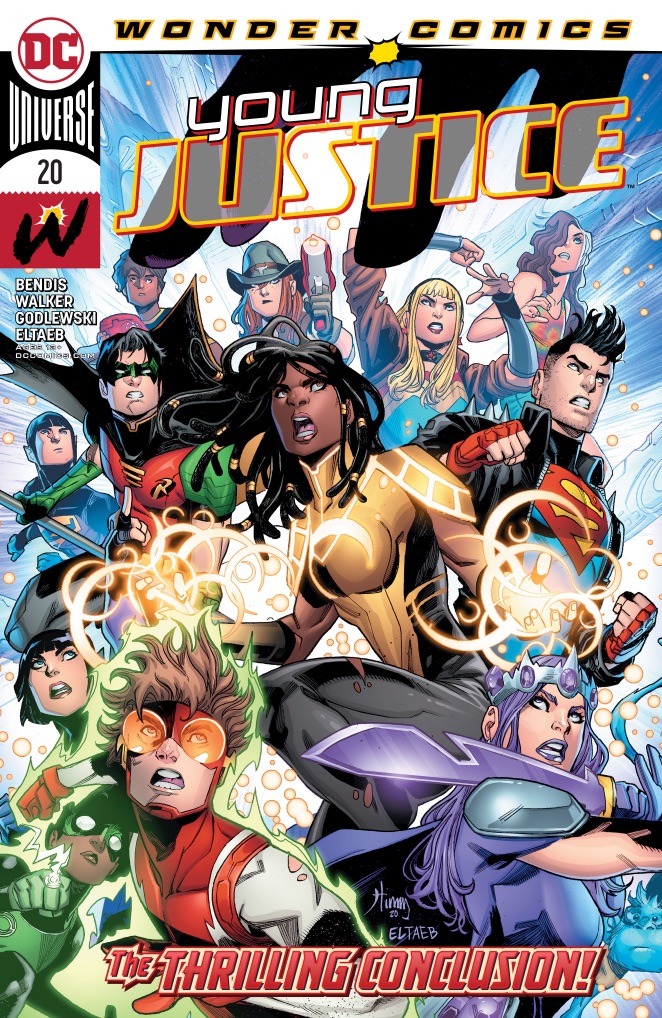 Scheduled to arrive in stores: November 3, 2020

Once they reach the meeting room, however, they encounter a shut down sentry version of Red Tornado, who attacks them seemingly out of nowhere. The team struggles, but thanks to Keli's perseverance, Red Tornado is stopped long enough for John Stewart/Green Lantern to swoop in and save them.

John and Keli have an argument over her right to the ring she "hacked", but after the rest of the team stand up for her, John decides to leave the ring with Keli, provided she gets proper training in the Hall of Justice.

Officially a team, Young Justice (plus The Wonder Twins and Dial H For Hero) sit around a campfire and enjoy life.

Story - 0: I have been reviewing this book for 8 months. Admittedly, thanks to the situation we're all in, I guess it was gonna be less, but still. Nearly a year of my life I have given to this book. I have read every single issue in order to properly review it, and after all this time I would say that I have been a faithful fan, despite the nosedive of quality the book took.

You've been with me though this journey, as I ripped apart the last few issues, only really two coming close to being acceptable.

When I heard this was to be the last issue, I immediately knew what would happen. I knew that Bendis would pull a Bendis, and the ending would barely address the plot of this run, the plot that got us all into the book in the first place. True, we knew that the reason they forgot each other was Doctor Manhatten, or whoever DC is plugging now as the one behind it all, but the team didn't know, and even then, there was probably more to it than just timey whimey multiverse weirdness.

At the very least, the book was supposed to provide some sort of closure, some sort of ending that showed this team, that had been forced apart, back together.

It was a fool to even think there would be an ending.

This entire issue is just about Keli Quintela (a Bendis creation, what a shock) proving that she deserves the Green Lantern ring she kind of stole.

Now, I don't want to talk about Keli too much since there is a way more important point to address, but allow me to get her out of the way first.

Keli, I have nothing against you. In fact, I find you quite the interesting concept! The Green Lanterns are meant to be the diverse force of justice in the universe, so the idea of someone from a poor background with no Green Lantern protection hacking a ring and trying to save people… I think it's got potential, even for its own book, perhaps, DC? (wink wink)

But my lord. This should have been about the team, or if you REALLY want to single out one character, Connor, you know, the main character?

There are so many small things I can talk about and rant about for hours: Amethyst, forming member of this version of the team, coming back with no explanation as to why she ever left, and no relevance as always; Jinny Hex, Wonder Girl, Impulse, Robin and Superboy barely carrying any importance in their own book; the inexplicable appearances by Naomi and Spoiler; the book advertising the Wonder Twins and Dial H For Hero as major characters who appear in one single panel; a team that has beaten serious threats like the Legion of Doom not being able to stop a weak version of Red Tornado in their final issue; The artificial standing up for Keli by the team, as if they know anything about her.

But in the end, what I'm most angry at, is as always: Bendis.

Bendis, you can't pretend that this book ended before you could finish it, or that this is an actual ending. You started this book, and you are one of the most powerful people in DC right now. You could have done anything with these characters, for unlike the Teen Titans, Young Justice only has one famous adaptation, and it hasn't been too defining. You could have done so much with these beloved characters, characters who are lucky to get mentioned these days, and what you did was not even try. I would have forgiven an ending that you barely tried with, one that felt fake and lazily put together, but this isn't even an ending, it was a filler issue that couldn't even convince me that this team is a team, when they barely know each other, and their interactions boil down to "We're such good friends!" like a bad pre-school cartoon.

I hate to say this, but I am glad this book is done. I am glad because as Superman would say, "Hope springs eternal", and in my heart, I hope that one day, years down the line, an aspiring comic book writer has read my reviews, and has learned what you, Bendis, refuse to do, and maybe, just maybe…

Young Justice will truly be reborn.

Art - 3: Once more, there really isn't anything to say about the art. There are only so many ways to say "adequate". It was adequate, and this review is long enough as it is. Thanks for a decent work, I guess.

Cover Art - 0: I know, this seems hyperbolic, but I cannot accept such incompetence. Characters who appear in one panel on the cover? The main character of the issue on the side as if she's merely guest starring? Naomi in the center when the last issue really should have Connor? The most generic poses imaginable? Pathetic final cover.

Variant Cover Art - 3: Bixie Matheiu has been one of the few positives so far in this run, as she delivers one last intriguing variant. Yes, it looks like a bad PS2 cutscene, but… How many times have you ever seen a variant like this? It's original, bold, and daring, words that do not apply to this book, but do apply to Matheiu, who has always tried to give us something fresh, even when it failed. A thumbs up, Matheiu! I hope you get hired for other books!