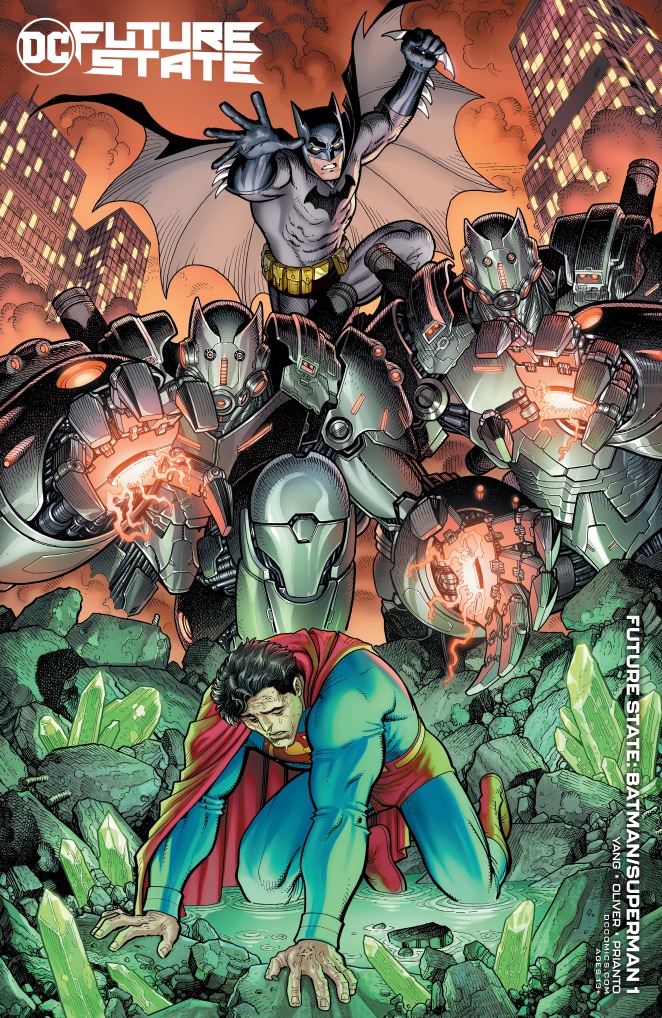 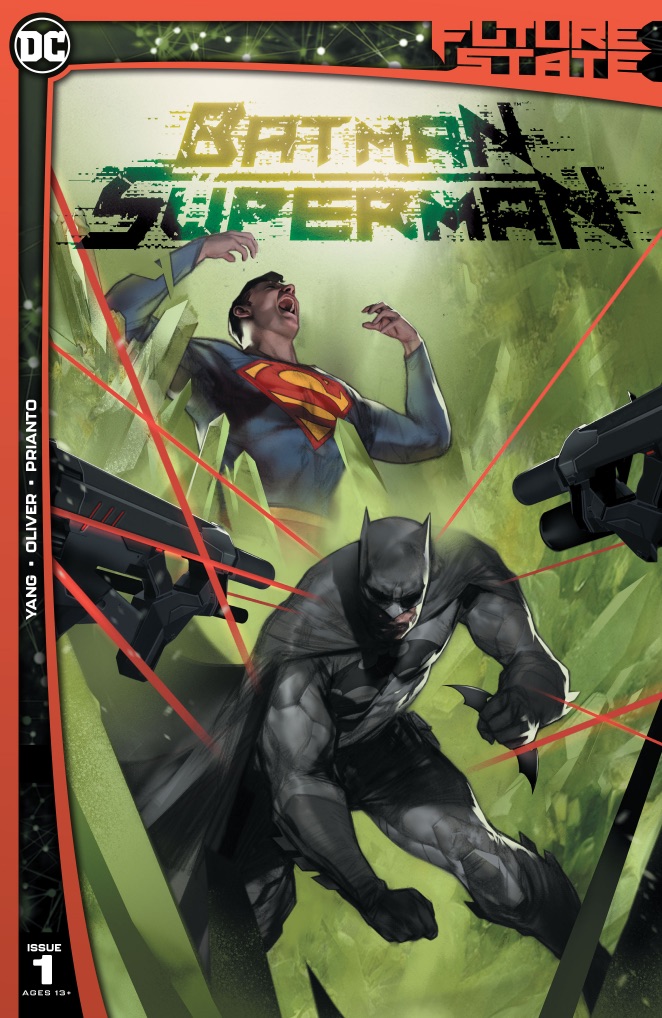 Reviewed by: Craig Boehmer
Click to enlarge
Superman saves a suicidal young man from being hit by a train. During their subsequent conversation, the youth reveals that he took a false face serum to play a prank on his school. The false face serum has left him with permanent ram horns that come out whenever he gets nervous. Superman does some research which leads him to Gotham. He meets up with Batman, who is currently navigating the rise of The Magistrate. Batman is reluctant to have Superman join him due to the attention he will draw from The Magistrate. The two witness a number of false face people attack a Magistrate drone and draw the attack of a Magistrate robot. Superman quickly intervenes to help the people and learns of an underground society of false face people who are initiating a rebellion against The Magistrate. They go to the underground society where they meet the father of one of the rebels, who is one of the major scientists behind the false face serum. While Batman is investigating other aspects of the False Face Society, Superman and the head scientist, Mr. Toad, talk about his child in the rebellion. The issue ends with Mr. Toad stabbing Superman in the stomach with a kryptonite blade.

Story - 4: Overall, its an interesting story, and it makes me want to read the second chapter. This doesn't feel like a Future State book, it could fit into any time period of Batman and Superman's relationship, which both hinders it and helps it. They really could have tried to experiment with the Batman and Superman story here. They could have had this Next Batman and Jon, or even just have this in the further in the future to test out new concepts for the duo. A Next Batman and Jon story would have further fleshed out the characters and world of Future State, in much the same way that Yara and Jon's books together do. Yang could have given us a first meeting between the two which could have been really fun. Gene Luen Yang gets the characterization for both characters pretty well. I did not like his work on New 52 Superman, but that may have had more to do with Romita Jr.'s artwork on the title. I did really enjoy his work on "Superman Smashes the Klan," so I am optimistic about his upcoming run on "Batman/Superman". In this he nails Superman's desire to just help people. His interaction with the suicidal young man at the beginning is quintessential Superman, not only did he save the boy, but he spent time talking with him about the problems that led the boy to such a rash decision. Plus, Batman is his usual nice blend of gruff and heart felt. Providing a great dynamic between the two characters.

Art - 5: I love Ben Oliver's art, and it is really brought out by Arif Prianto's colours. The colors are vaguely reminiscent of a fantasy comic which highlights the nature of these mythological characters. I really hope that Olive, Prianto, and Yang do a long run together on the ongoing "Batman/Superman" series.

Cover Art - 5: I love this cover. The use of shadows on Batman and the anguish of Superman in the background really peak my interest for this story. The art overall for this comic is bang on, which can't be said for all of the Future State issues.

Variant Cover Art - 4: I didn't like this cover quite as much as the regular cover. But it still hooks you. Adding Superman to foreground with the great looking robots aiming at him is a great image.