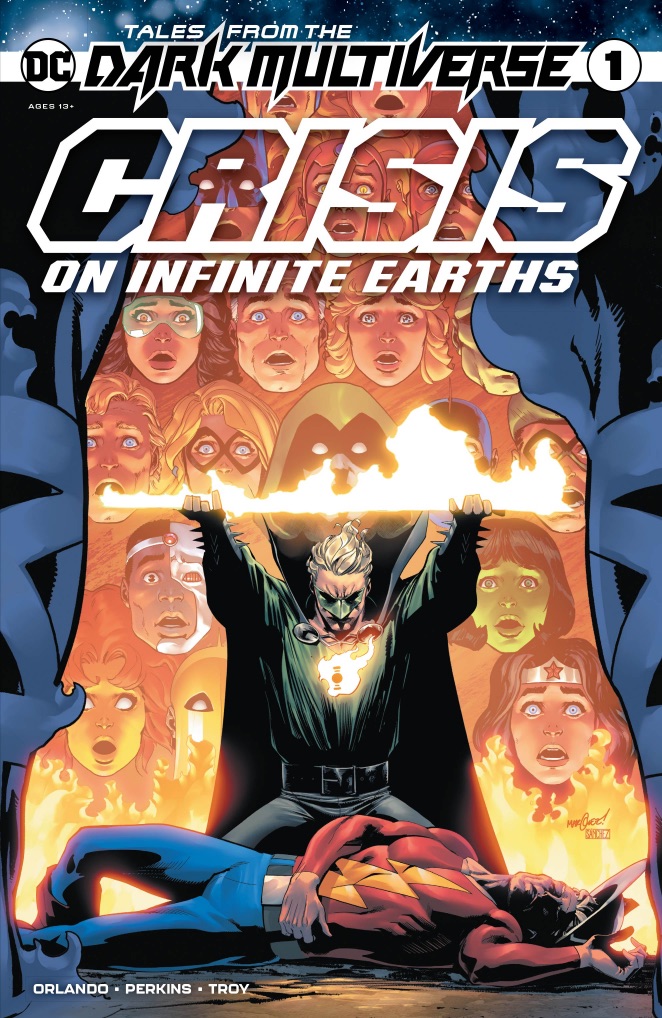 Tales from the Dark Multiverse: Crisis on Infinite Earths #1 [of 1]

Reviewed by: Craig Boehmer
Click to enlarge
The gist is that the JSA survived Crisis on Infinite Earths and now Surtur is attacking them. He arrives and shows Alan Scott the remains of Hal Jordan. They fight and Surtur destroys many heroes. Power Girl sends Superman into retreat by holding Surtur off for a moment. The remaining heroes gather to create a plan. They decide they will create a black hole inside Surtur to syphon off his energy. In the second battle Surtur kills The Flash, destroying their plan. He is close to defeating all of the heroes when Superman freezes his face. Recovering Surtur grabs Superman and begins to kill him prompting Alan Scott to make a deal to find new worlds for him to destroy in exchange for sparing Earth. It ends with Alan Scott taking a new Green Lantern oath for Surtur.

Story - 4: This was an interesting tale that seemed to move past it's original hook very quickly. The story it told was only loosely related to the original premise of it being a Dark Multiverse version of "Crisis on Infinite Earths".

The focus of Surtur as the villain kept the story fresh, and allowed a different big bad to get some panel time. This story may have seemed played out if it was about Darkseid, the Anti-Monitor, or I've of the other more frequent works enders. Instead Surtur's presence provided a new dynamic on the giant monster destroying earth trope. This story had the requisite amount of death and destruction to make it part of the Dark Multiverse. It also contained some very cool scenes. Power Girl's last fight against Surtur, Superman unleashing, and Green Lantern's final negotiations and transformation. The twist at the end of turning Alan Scott and Surtur into a DC version of Galactus and Silver Surfer was a very creative idea that I enjoyed. This comic made me wish for an Earth 2 JSA book which acknowledges their long history and has them in their senior years, that mini series could be fun. I also thought, randomly, will DC ever make a "Light Multiverse" where extra good things happen during each event?

My only negative was the sheer amount of text that bookended this issue. This is pretty common for these books, but I really wish they would show and not tell.

Art - 5: The art was dynamic and visually appealing.