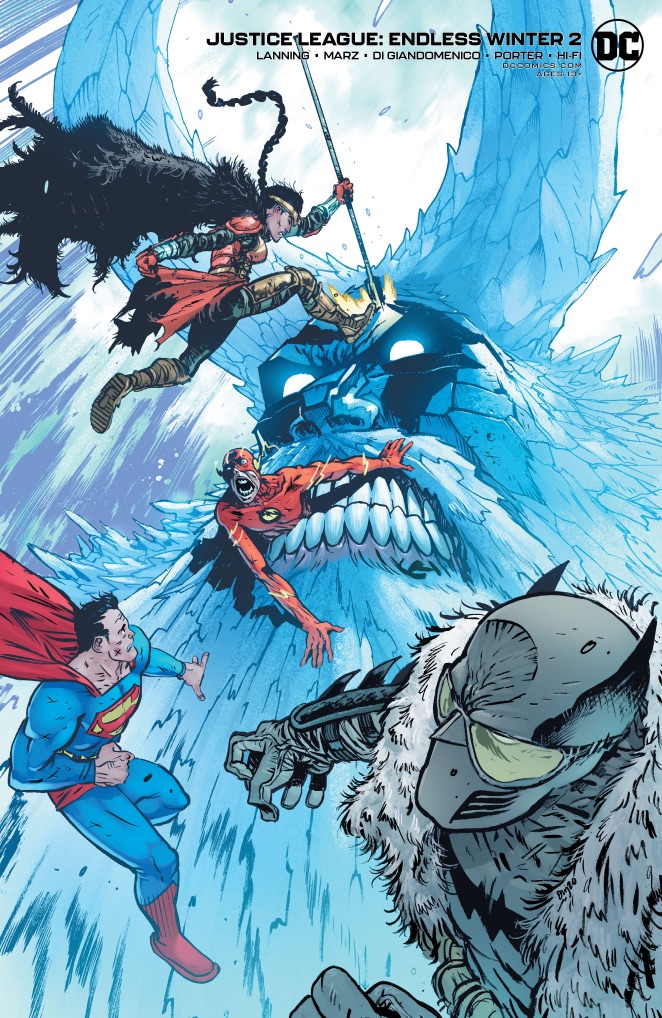 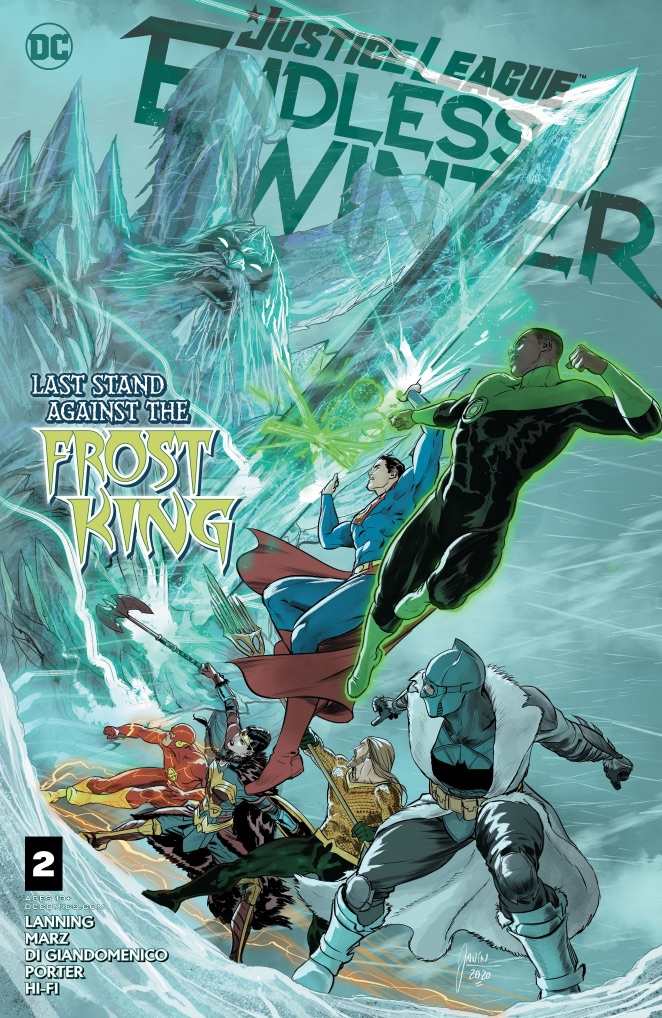 Reviewed by: James Lantz
Click to enlarge
A millennium ago, Hippolyta, Viking Prince, Black Adam and Swamp Thing battled the

Frost King. They were victorious, but the conflict had cost Edwald Olafsson, the man who became the Frost King, his family and Viking Prince his life. Now, the Justice League must fight the recently awakened and Kryptonian crystal empowered Frost King alongside Black Adam. If they do not defeat their chilling foe the world will truly be covered by the ice of the endless winter.

The Frost King is in the Arctic remains of Superman's fortress waiting for the right moment to revive his frozen wife and children. The Justice League arrives promising to help him, but he refuses aid. Another battles ensues. This time a giant Swamp Thing possessed by the Viking Prince's spirit has joined the fray. He reveals that the Frost King's body is merely an avatar containing Edwald Olafsson's essence. Olafsson's remains are buried somewhere in the arctic. Hippolyta and Batman find them fused with Kryptonian crystals. Yet, they must make a decision. Do they save Edwald Olafsson, or do they destroy him?

As Aquaman brings fire trolls to aid the Justice League and Superman fights Black Adam, Hippolyta, Wonder Woman and Batman attempt to reach Edwald Olafsson. They convince him to not let his grief and rage turn him into the monster that is the Frost King. With that, ice avatars melt, the world returns to normal, Swamp Thing disappears, Viking Prince goes to Valhalla and Black Adam promises that he and Superman will fight each other another day. All this occurs while Sebastian Stagg is taken into custody for his theft of Kryptonian crystals causing the Frost King's awakening. Meanwhile, Black Adam warns the planet that their blind faith in the Justice League could bring about their doom. At the same time, Superman's fortress has been rebuilt and made more secure. The Man of Steel, Wonder Woman and Batman check on Edwald Olafsson. He wants to be put in suspended animation until the Justice League finds a way to revive his family. They promise to help the Olaffsons while awaiting their next adventure.

Story - 5: One of the most difficult things for me is trying to summarize an issue in a way that isn't too long winded. This is why I tend to condense a comic plot to two or three paragraphs. Therefore, I recommend anyone out there read the comics I review on Superman Homepage before reading the review itself.

I haven't read the other chapters in “Endless Winter”. However, I didn't need to. Much of the dialogue and banter fills the reader in on what happened after the previous issue of Justice League: Endless Winter. Not many comics these days are that reader friendly. Other creative teams need to learn to make their books more accessible to new readers in my opinion.

Some might say that this story took a predictable route in places, and they may be right. Yet, it is still what every good superhero comic should be – fun and entertaining while feeling like a roller coaster ride throughout every page. You may know how it will end, but you'll enjoy it nonetheless.

Art - 4: I'm knocking off a point for botched S-shields on Superman's costume. The rest of the comic is extremely well drawn, however. The flashbacks particularly stand out in this issue.

Cover Art - 5: I was wrong about the covers interconnecting, but this is still a beautiful cover worthy of this story arc.

Variant Cover Art - 1: Who allowed this variant to pass. It's horrible. This style works for an indie horror, but it fails as a DC superhero cover.