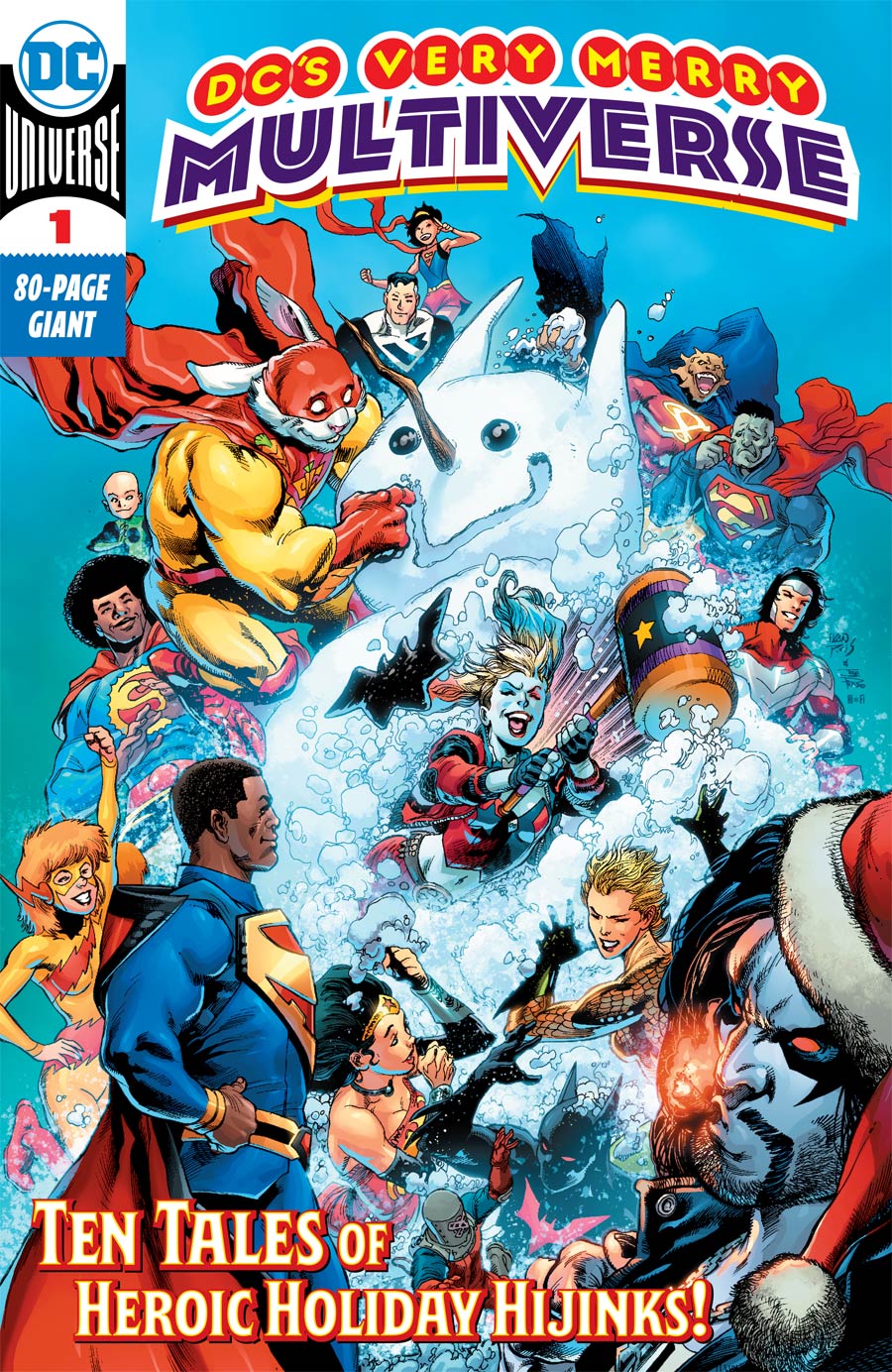 Scheduled to arrive in stores: December 8, 2020

Reviewed by: Tony Parker
Click to enlarge
Harley Quinn in "It's a Horrible Life!": Harley Quinn, feeling the Christmas blues, receives some advice from Layma, the long lost third Wonder Twin, and finds her own Christmas spirit.

Batman in "Christmas by Gaslight": On Christmas eve, Eel O'Brian attempts to rob Grady Rothchild, a fellow billionaire of Bruce Wayne, but The Batman is not gonna let that slide. An intervention from Victor Fries leads to the crime being stopped, and a rare white Christmas in Gotham City.

Teen Justice in "To Stop The Star-Conqueress!": It's New Years Eve, and the Justice Guild of Earth-11 has been brainwashed by Starrla, the Star Conqueress. A group comprised of Laura Kent/Supergirl, Talia Kane/Robin, Jess Chambers/Kid Quick, Jackqui Hyde/Aquagirl, Donald Troy and Klarienne The Witch Girl, not yet a fully formed team, manage to save the older heroes in the nick of time, before deciding to form their own team, Teen Justice.

President Superman in "Bizarro Love Holiday": On Earth-23, President Superman creates a global holiday so that all the people on Earth can unite in empathy and understanding. Bizarro, however, "loves" the holiday because no one had ever given him anything before, so he couldn't understand it. Angry, he attacks President Superman, but thanks to an intervention by a little girl, and a gift from the heart, Bizarro ends up "hating" the holiday.

Batman Beyond in "Holidays Beyond": On Earth-12, Terry McGinnis/Batman is spending Christmas Eve searching for Bruce Wayne's old Bat-Sub, that was used once years ago before vanishing. As he's there, he ends up hallucinating a "Christmas Carol" situation, in which Bruce never became Batman. Guided by three spirits (The Gray Ghost, The Joker, and Dana Tan), Terry realizes how important Batman is, and gifts Bruce with a memento of his long gone butler, Alfred.

League of Shadows in "Night of the Magi": In Ancient Egypt, a Hebrew slave named Ya'akov Ben Shimon attempts to escape his dreadful life by disguising himself as one of his oppressors. However, he ends up deserting his own family behind, and a set of circumstances lead to his untimely demise. The gods of Egypt refuse his entry into their afterlife, but acquiesce his pleas for a chance at redemption by turning him into Ragman, and sending him to cleanse his sins as a protector of the innocent and downtrodden. Many years pass, and in the present day on Earth-13, Ragman and the League of Shadows stop Mother Destruction from destroying another Saturnalia, and another bandage unfurls from Ragman's punishment.

The Unjustice League of Unamerica in "Have Yourself a Bizarro Little Christmas": On Earth-29, Bizarro attempts to teach his Unjustlice League friends the spirit of giving. This misguided Christmas ends up inviting the ire of Zanta of the Intergalactic Santa Corps, and in the end, Bizarro learns that perhaps the spirit of giving is not lost after all.

Booster Gold in "Twas The Night": On Earth-22, Booster Gold's superhero themed restaurant is under attack by Maxwell Lord, who claims superheroes bring more harm than good to the world. Booster, who had been spending the entire night trying to make Christmas memorable (while bragging about his exaggerated feats) nearly loses, but with help from his costumed, powerless staff, manages to drive off the villain and ensure a merry Christmas for all. In the end, though, it turns out it was all a plan to make his staff (and his pocket) feel good.

Lobo in "A Very Lobo Hanukkah": Lobo kills the entire 432nd High Council army in order to observe his holiday tradition of spending time with the dolphins.

Well, this is a slightly different issue than usual, so instead of my usual summation, I am going to do a bullet round of story ratings for each one, ending with an overall story rating. Buckle up.

Story - 0: "It's a Horrible Life!": Absolutely dreadful. Reminiscent of the disappointing 2019 "Harley Quinn" cartoon's attempts to turn Harley into some sort of Rick Sanchez clone, the anti hero who is a victim of abuse and mostly just wants to have fun, but not to the extent of actually committing real atrocities is seen... Wanting to commit real atrocities because it's fun. I miss Paul Dini.

Story - 3: "Christmas By Gaslight": It's nothing TOO special, mind you, but seeing the Gaslight universe is always a treat, the Dickonsean vibe is appreciated, the welcome surprise appearance of Plastic Man is a joy to witness, and at its core it's a story about Batman telling Plastic Man he still has a chance to do some good. Solid.

Story - 4: "To Stop The Star-Conqueress!": Surprisingly enjoyable, though perhaps it was because I enjoy the concept of the children of superheroes saving their parents, but this small snippet of a team of teen heroes held a weird amount of quality to me, plus a bunch of fun ideas, such as the slightly unsure daughter of Superwoman and yet another Troy with confusing origins. Would read more of this team!

Story - 3: "Bizarro Love Holiday": Again, nothing that incredible, but it's always a pleasure to see Bizarro again, especially when he gets a happy ending! Also, it was nice to see an African American Superman!

Story - 4: "Holidays Beyond": Seeing Terry McGinnis is always a gift, and while admittedly the "Christmas Carol" plot comes out of nowhere, it's still heartwarming to see Terry gift his father with a memento of the past, not to mention the references to the work of the great Paul Dini. A worthy addition to one of the defining versions of the DC Universe. Plus, Mark Hamill Joker!

Story - 4: "Night of the Magi": While the present day plot is a little confusing and not very engaging, it's the origin story of Ragman which earns my plaudits: A truly striking tale of a Hebrew slave deserting his own family out of cowardice and selfishness, given a second chance to right his wrongs and ensure no one suffers injustice again. Compelling in ways I couldn't begin to picture. Ragman movie when?

Story - 4: "Have Yourself a Bizarro Little Christmas": One of my earliest Superman memories is of the final part of the "Trapped on Bizarro Earth" arc, so permit this reviewer a side dish of nostalgia. Seeing the hilarious Unjustice League and the frankly touching attempts by Bizarro to try something new were a joy as always, and it's easily the second funniest story in the issue!

Story - 4: "Twas The Night": Another surprisingly good story, though more from the ending then the beginning. Booster Gold's back and forth travails from selfishness to selflessness respect the character while allowing him to grow, and the touching scenes at the end brought a smile to my face. Merry Christmas, you egomaniacal yet charismatic man!

Story - 5: "Prez Rickard's Magical Sci-Fi Desolate Souls Club Holiday Special": All right, I know, this is a high score, probably higher than this story truly deserves, but I laughed a lot, all right? And it's been a while since I have. Jay Baruchel has an eye for absurd humor, and in a story that refuses to take itself seriously, we get something truly funny, and how fun is that to say?

Story - 5: "A Very Lobo Hanukkah": I am not a big Lobo fan, or a big Tom King fan. I find him (insulting as this might seem) pretentious at times. Not always, mind you, but his Batman run (as hurt as it was by executive intervention) was a real stab in the heart, starting off compelling before crashing down in tragedy. His insistence on gimmicky storytelling, such as his infamous batman and joker roadrunner issue can truly test my patience. But dear readers, any story that can contain biblical quotes in front of Lobo gunning down an entire army all so he can be with a dolphin, while simultaneously deliver a truly important message of tolerance of other faiths, and actually touch my heart whilst making me laugh?

That's true talent, and a real Christmas gift. So thank you, Tom King, and a very Happy Hanukkah to you, Lobo.

Overall - 4: By rule of averages this would be a 3.6, but I decided to round it to my real feeling. This was not a perfect book, and it contains some odd moments (like the lack of buildup in "Holiday's Beyond", the abject failure of "It's a Horrible Life!", the strange lack of other characters like Flash, Green Lantern, Aquaman, and most glaringly Wonder Woman), but those are few and far between, with the real aim of this issue, to entertain and even warm my heart, having succeeded. All in all, I would recommend this issue wholeheartedly! There is something for everybody here!

And with that, I wish you all a Merry Christmas, Happy Hanukkah, Happy Kwanzaa, and etc. etc. etc. It's been a tough year, but as Superman says "You are stronger than you think."

I promise you that.

Art - 5: It would be wrong to judge whole different art styles in one paragraph, but I am really not an expert on art, and I don't feel like I could do another bullet round when I wouldn't have much to say. So for the sake of being truly honest, I found all the art in this book, even in the stories I didn't like, to be striking and exceptional. Each story contained the right art style for its setting, and the variations were refreshing in the sea of similar looking books the major companies provide. Jumping from the psychedelic and blurry visuals of "Night of the Magi" to the cartoonish and caricaturish nature of "Have Yourself a Bizarro Little Christmas", from the wonderful DCAU tribute in "Holidays Beyond" to the weirdly enchanting old timey mood of "Christmas by Gaslight", I felt like the books artists all deserve a round of applause!

Cover Art - 3: I am not sure of my thoughts on this cover. It's not bad, just a little odd with a sizeable number of the characters on it not appearing in the book itself, but also, it's a cute cover, and really, what more can you ask for in an issue like this?