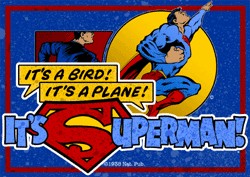 The Strength of Two Men

What a great year for Superman fans. Not only did Brandon Routh bring Superman back to life for us, but Hollywoodland allowed us to explore the death of the Superman so many of us loved. And perhaps because of this resurgence of interest in Superman, several revivals of the Broadway musical It's a Bird... It's a Plane... It's Superman were staged in community theatres around the USA. This was an exceptional treat for those of us both old enough and lucky enough to have seen the original in 1966.

My wonderful husband has indulged my Superman obsession for 30 years now, and this summer he did not fail me. We went to see Superman Returns in both 2D and 3D, and we drove huge distances to see two different productions of It's a Bird ... It's a Plane ... It's Superman. The first was a joyful, teenage production in San Jose, CA, chronicled on the Superman Homepage. The second, presented by Showtunes! Theatre Company in Kirkland, Washington, promised to be much more, with a mostly professional cast and composer Charles Strouse in attendance.

But what greeted us looked strange. The stage was bare black, except for a red, blue and yellow slide announcing the title of the show. Incongruously, half a dozen music stands were lined up across the front of the stage. And then four musicians took their places at the back of the stage. How could the glorious music of It's a Bird... It's a Plane... It's Superman be recreated by just four musicians?

Desperately searching for answers, we finally read the director's notes in the program. "In concert, with no wires or special effects, we hope to make this Superman fly by the sheer talent of those involved..." This was to be a "staged concert reading" of Superman.

I was skeptical, but it didn't last for long. Following a crash of cymbals and the deep bass of a glorious grand piano, the punctuation of a tommy-gun trombone filled the theatre. With only four musicians, Superman's driving overture still overpowered the audience and transported us straight to Metropolis.

Click here to read Toni's complete review of the Kirkland performance as well as her memories of the original 1966 Broadway musical.