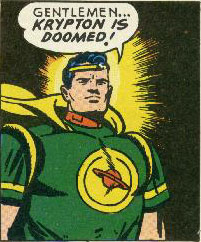 Beloved Superman comics writer Elliot S! Maggin has written a political opinion article in the L.A. Times newspaper titled "Look! Up in the sky... It's Al Gore!", which featured this image of Jor-El (shown right) in the printed edition. The article (sans image) is now online at LATimes.com.

WHEN MY daughter Sarah was in utero, all we knew of her was a sonogram that we brought home from the gynecologist. I framed that photo and labeled it with the name "Jor-El." In our family, we generally name our kids after deceased relatives whom we want to honor. Jor-El seemed a good candidate. At the time, I was writing Superman comics, and Sarah's onetime namesake, you will recall, is Superman's Kryptonian father, an eminent scientist whom the ruling "Science Council" of his world laughed out of the room when he told them that they were facing a planetary crisis: "Gentlemen, Krypton is doomed." I have often thought that doctors and scientists, trained to concern themselves with truth and human values, would be more suitable candidates to set public policy than those schooled in law, economics and management who commonly populate our public servants' talent pool. But on Krypton, either the essential nature of scientists diverged from that of the open-minded and collaborative types with whom we are familiar here on Earth, or generations of "scientific" rule had befouled the Kryptonian leaders to the degree that they became as shortsighted and starchy as those who traditionally administer our own public affairs.

You can read the complete article at the LA Times website.