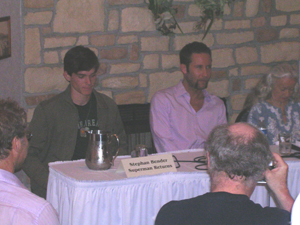 On the evening of Friday, June 9, I got the opportunity to attend a press mixer at the AmeriHost in Metropolis. Among the press were representatives from the Associated Press, as well as newspapers and magazines from around the globe. Entailed below are the accounts of the evening:

Press: Marv, you did the novelization for the film. In addition to the script, what other reference material did you have? And, did you like what you read?

Marv Wolfman: First, aside from the script they sent me tons of photos, and I had a long, long meeting with the writers (Dan Harris, Michael Dougherty) going over everything and going over there intents for characters that are just touched upon in the movie. You know, you can only do so much in a 2 and a half hour film. So they said we have these thoughts about the background of this character, and the background for that character. On top of that, they asked me to add stuff on top of that as well. As far as liking it. Yeah I liked it. It's a very emotional story, which none of the others have been. They've all been plot oriented, and this is more about the character.

Press: What do you think of Metropolis so far?

MR: I'm from Evansville, Indiana, which is about 3 hours from here, so I thought I'd grow this (runs fingers through his handlebar moustache).

Click here to read the complete transcript of the press mixer interviews.