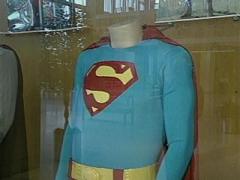 A special collection of four Superman costumes is available for public viewing at the Indiana State Museum. Dane Nash, of Indianapolis, owns the collection.

"To be able to acquire the costumes and be able to preserve those for the future is something I've really gotten interested in lately," Nash told 6News' Julie Pursley.

Two of the costumes were worn by George Reeves in the 1950s - one for black-and-white filming, and one for color.

Christopher Reeve's costume from 1983 is also on display, along with Dean Cain's suit from "Lois & Clark" in the '90s.

Nash included some other nostalgic pieces, like some of the original comic strips that hit newspapers for the first time in 1939.

Nash, who hopes to one day open a Superman museum of his own, said he has been a fan since he first saw a Superman episode at age 5. The costume display is part of the continued IMAX screening of "Superman Returns" at the Indianapolis IMAX Theater.

"You get an opportunity not only to see the film 10 times bigger and 10 times brighter and 10 times better sound, you also fly along with Superman in the 3-D effect," said IMAX Theater director David Brown.

The movie runs through mid-November. Tickets are available for between $10 and $12. The costumes can be seen for free at the museum through Jan. 16.