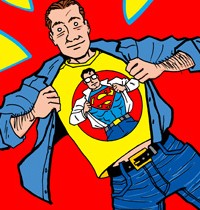 MTV has published the 4th installment of their 5-part "Superman Fanboy Dilemma" series. This time around they're looking at dealing with movie merchandise and tie-in toys...

Art appreciation is always subjective. The density of my Superman collection (I'm a diehard Non-MOC collector, although I do sometimes save the backing card) has prompted some interesting reactions from visitors to my apartment. It's been called "slightly frightening," "obsessive" and "cool." One contractor actually gasped and said in broken English that it was "so beautiful...."

Maybe fanboys love action figures because it's a way of openly declaring one's passion. Comic books themselves are usually carefully protected and packed away in dark, cool rooms. Perusal is limited, and often restricted. Jeff Ayers, the manager of and buyer for NYC comic store Forbidden Planet, notes that "people love to immortalize their passion in plastic form. Never underestimate that."

But perhaps Chris "Venture Bros." McCulloch sums it up best. "A tiny little plastic superhero on your shelf - well, that's a beautiful thing."