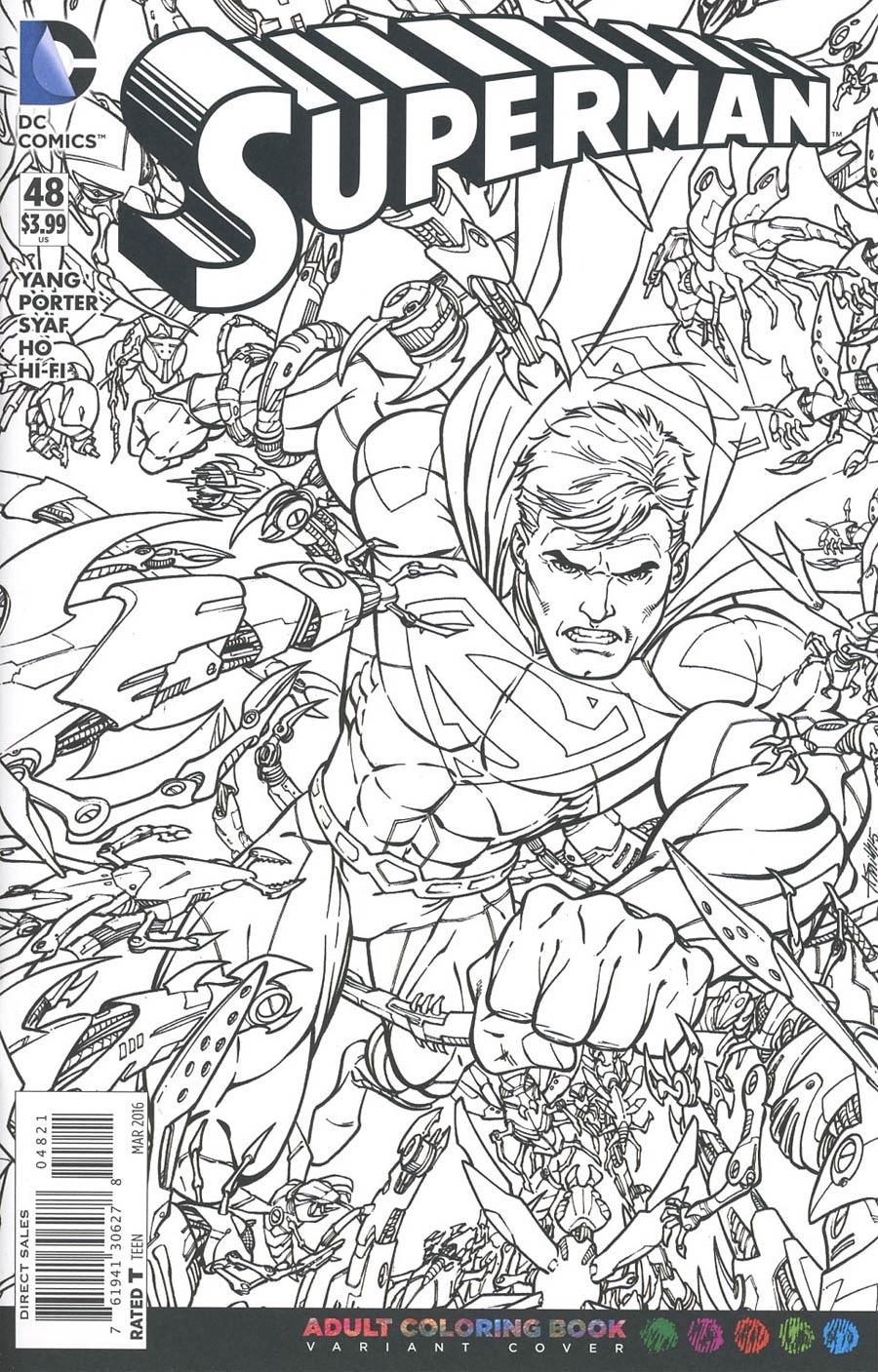 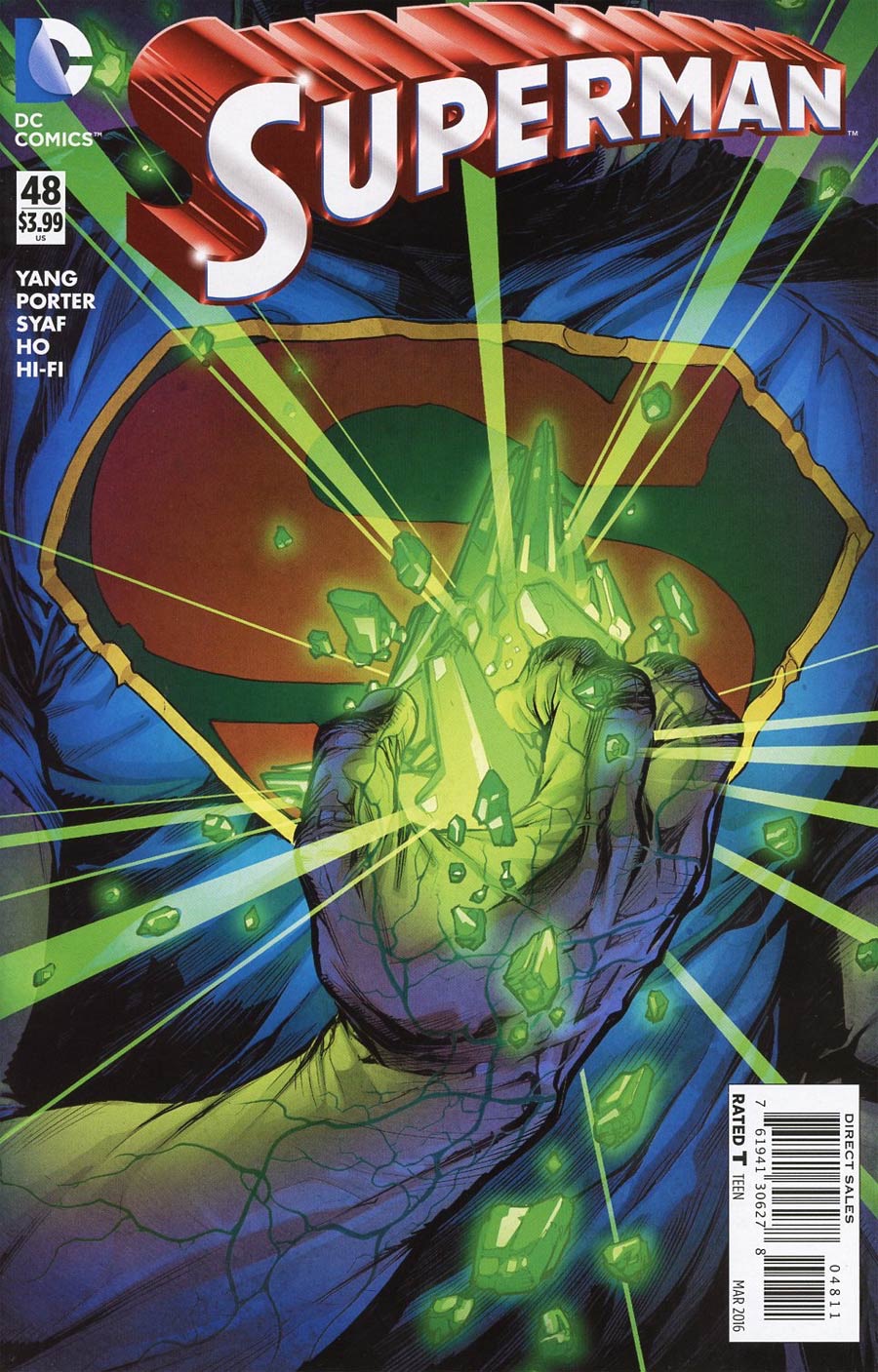 Click to enlarge
A public debate in Central City is being targeted by an assassin named Kingslayer. Steve Trevor of ARGUS thwarts the attack but is almost killed in doing so leading to a now completely human Superman leaping into action. Two against one ensures Kingslayer's capture but then Steve uses a new weapon on the villain. A synthetic torture lasso, inspired by Wonder Woman's lasso of truth.

Superman is angry that Argus would use such devices but the conflict is cut short as Kingslayer throws himself through a skylight right into the auditorium holding the debate, breaking his leg in the process. This creates hysteria amongst the crowd and suddenly Superman realizes there is a secondary trap, so he instructs Steve and his team to get to the exits and check them. Explosive devices were set to kill if the exits were used and thus Superman saves the day, lucky for him the debate was on Superman himself so it worked wonders as a little PR exercise, but as the villain is led away Clark turns to Steve asking a monumental favor.

Elsewhere Hordr, in a mysterious operating theatre, watches over The Puzzler. Hordr uses the same tech that created himself to download the information and personality of The Puzzler into a new android body. It works and the new body comes to life but the human Puzzler realizes too late that he has been tricked as Hordr kills him.

On the way back to the Argus base Clark reveals Vandal Savage and his children have orchestrated a massive attack on the Justice League and Superman specifically.

The League are imprisoned in their own Watchtower with the Savage family, their captors. With only Wonder Woman on the outside fighting to free them, Superman needs his powers back more than ever. He explains that 'his top layer of cells has mutated to prevent his conversion of solar energy'. Superman's theory is to use Kryptonite as chemotherapy and blast the infected cells away to allow his healthy cells underneath to supercharge again and the one place on earth that has a stockpile of Kryptonite is Argus.

As they arrive in Hawaii, at the Argus archive they don't notice they are being followed by the new Puzzler. As Steve and Clark go to the lower levels, Puzzler begins exhibiting Metal-0 type skills absorbing all the robotics, drones and metals. The elevator ride is awkward as Steve and Clark talk about the break up. The elevator opens up into a basement and they meet Etta Candy. The two Argus agents release a giant locker filled with Kryptonite and the poisonous effects work immediately, with Clark collapsing in a heap.

Puzzler takes this moment to attack, punching through to the chamber and attacking Etta and Steve. He reveals he is former Argus agent Evans, the architect of the facility. His conversion was a calculated move by the Savage family.

Puzzler absorbs more and more machinery, becoming more deadly and fighting through Argus defenses to get closer to Clark. Steve drags Clark away from Puzzler and his ninja star puzzle pieces. Steve pulls Clark to cover and tells him that Puzzler has absorbed almost all the archive and they have to leave, but Clark feels a sudden urge of power with the last of his strength he climbs into the pile of Kryptonite.

In my last review I wrote a remark that Yang wasn't up to par in the writing.

Now I see it is mostly because he was the new guy left in the cold. I can't forgive his characterizations, particularly of Lois Lane, but there is no denying this is far batter than past offerings. He was left alone from the rest of the Super themed books to build the story while they went on telling the chunk of the story in real time. That to me now seems wholly unfair and I can see, now that the book has moved to be in sync with the others, that he can write a pretty good story.

A thing I can't figure is in Superman/Wonder Woman he was completely cured of his injuries, but they made no reference to carcinogenic like mutations. In fact they said "completely and fully mortal". This says to me he's Superman II'd and Clark even monologues this on page 5... but then he retains his aversion to Kryptonite and mutated cells...

How Puzzler found the base was explained but not how the Savages knew about Clark's plan. Did they have a spy on Olympus to know exactly when Clark would attempt chemo?

Also, that two bouts of solar radiation - direct from the sun wouldn't be more powerful than a pile of Kryptonite... well the only thing is that the end is almost in sight.

That knocks a point off for me, anything that knocks me out of a story with a 'waaaaaiiiiitamiiinnnnuuuttte' moment will.

The saving grace was Steve Trevor, the DC Comics most two dimensional character opening up and finally having that ex to ex chat. For me Superman is only as strong as his dramatic moments, something this Truth/Powerless arc seems to have neglected by taking Clark out of the situations where his supporting cast should be at the forefront. The scene in the elevator was great.

Again as much as I ragged on Yang for poor writing with the 'Before Truth' stuff, this is a turning point. At least for me.

Art - 4: Two artists' two styles, there was a noticeable jump in style but not enough to spoil the book.

The scenes with Kingslayer were a bit harder to follow. The frenetic pencilling meant some of the panels were either inked lightly or a little confusing to the eye.

Cover Art - 5: Evocative of covers gone by, this is almost a 'Kryptonite No More!' homage.

I really like it, one of the strongest of the T-shirt II era.

It is a powerful image and I think it's worthy of a poster.

When a fan, by the way, says it's worthy of a poster, it is indicative of a fantastic cover worthy of my Fortress wall or a cameo on The Big Bang Theory.

Adult Coloring Book Variant Cover Art - 5: I love this and though I wont be coloring in my cover I might scan it and have a go.