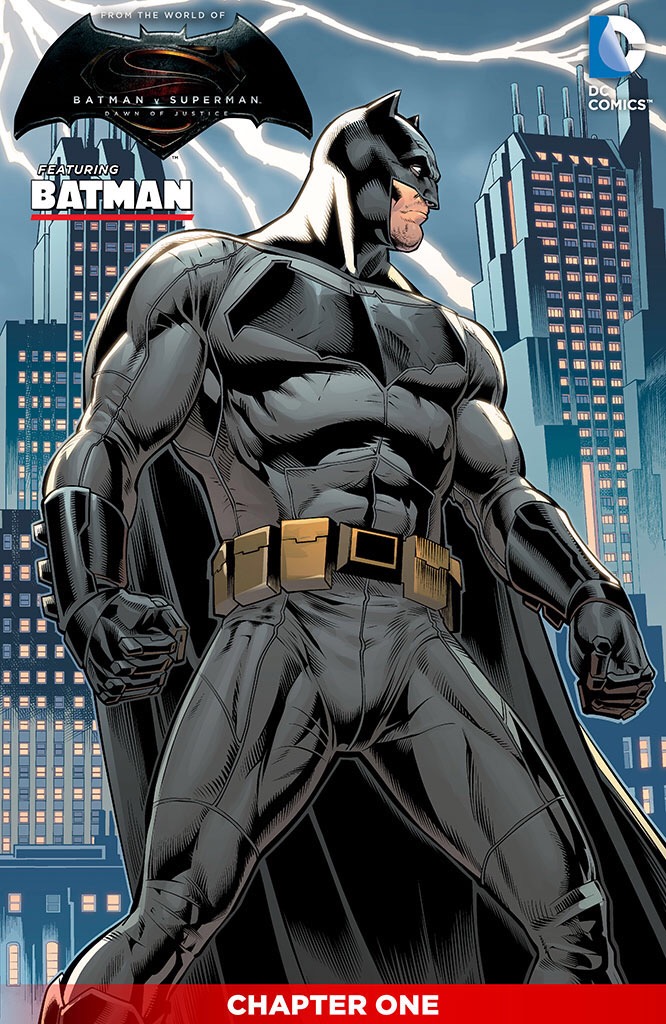 Click to enlarge
Our story begins with some low level hoods working to plant a bomb in an undisclosed Gotham building. They are working under the orders of Firefly. Who, we are told, is under the orders of another "client". The "client" is not named, but we won't have to wait long to find out who placed the order. The hoods are discussing the change in The Batman since the "Metropolis Situation". Batman has become more brutal and savage since his early days fighting Gotham's underworld. Where before you wouldn't even see The Batman when he arrived on the scene, now he shows no hesitation in disabling someone so badly they "won't be climbing any more balconies", as one character states.

Just when Firefly is ready to blow the building Batman makes his entrance and, rather brutally and efficiently, takes out Firefly. He turns to deal with the remaining thugs, but they are in no mood to take him on and give up without a fight. When the GCPD show up the hoods are neatly tied up and waiting, while Batman swings off into the night. All under the watchful eye of the "client" - Lex Luthor.

Story - 5: Hello, everyone! So, as you can see I, Stephen W. Wright, will be reviewing the Batman v Superman prequel comic for the Superman Homepage. I will be doing the reviews for each individual chapter. I hope to do one per week, and may be able to do more as I get more comfortable, and time allows. I'm not the most critical person. I just want to be entertained. I am not one to nitpick. Although, I will pick the nits if something REALLY bugs me. I will not be overly technical and, if I do my job, you will look at this as just a normal fan giving his opinion on the comic. A review with no agenda other than hopefully being entertaining and giving the fans like me a voice. I'm the type of fan that doesn't need things my way. I forgive A LOT when it comes to my comic book adaptations. As long as I'm entertained I can generally separate my wishes with a creator's vision. And, I am always willing to see the vision through to the end.

From the first panel this story has me. Right away we see Gotham, with the text "It all needs to burn." I'm in. What I want in my comic book stories is simple. Make me want to turn the page and not look at Twitter or Facebook. And, if the story makes me so invested that I don't hear my daughter Avery ask me for the 100th time for a snack then it's really aces in my book. Seriously, how many snacks can one 6 year old eat in one day? But, she's a Superman/Supergirl nut so I give in every time. Anyway, this story accomplishes both goals. It moves briskly from page one until the last page. It introduces us to a little more obscure Batman villain in Firefly, but manages to make the character cool in the few panels he/she is in.

The exposition that fills us in on Batman's attitude is done well and flows easily and naturally. Batman's point of by view is made very clear in this story. The events depicted in Man of Steel changed him. He is brutal (pretty sure he breaks Firefly's back). He is no nonsense and he REALLY doesn't like Superman (even if the character isn't mentioned by name, they pretty much spell it out). Batman's entrance into the story is perfect, as well as perfectly timed. Did I mention I think it's perfect? Cuz, I do. The characters' reactions to him came across very well. They are scared to death of The Batman and do NOT want to trifle with him. Something they show in a funny little bit when Batman turns to deal with the hoods after taking out Firefly. They point out how close Metropolis is to Gotham. Something that was mentioned in interviews and expanded upon here. Finally, I noticed that the cops don't seem too upset to see him, even calling him "Bats" as he leaves. This signifies a familiarity and an acceptance of his activities. No mention of any other characters, which did disappoint me. But, I'm sure this will be taken care of in "Batman v Superman" or the subsequent Batman films. And, hello Lex Luthor! I see you watching.

To make a long story short, "TOO LATE": Cool intro to Batman and his world. Batman's attitude, as described in this comic, will make him the clear aggressor in Batman v Superman. If this wasn't clear from the interviews and the trailers to you, it will be made clear from this comic. He will definitely be the "Bad Guy" in this "versus" battle. If Affleck plays Batman like I think he will, then I truly believe we will be in for a treat. I was worried about him when they first cast him, but I'm very excited to see what he will do for the character. I think he could have the same effect on the character that Heath Ledger had on the Joker when we all doubted his casting. This story makes me want more of this Batman. And, I hope that they turn this into a monthly book.

Coming up next week, if you'll have me back, is Lois Lane. Since I found her character a bit boring in Man of Steel, I hope the comic spruces her up a bit.

P.S. Superman is Chapter Four. And, it is taking everything I have NOT to skip ahead to that chapter.

Art - 4: The artwork for this story is very, very good in my opinion. I always respond to traditional artwork that is clear and not too "busy". I don't like the artwork that is a bit sloppier on purpose for, you know, artsy reasons. I noticed the color palette is muted and very similar to Man of Steel. It feels like a Zack Snyder production. This works well for the printed page. More so, then it does for the movies, where I think it does a disservice to Superman's suit. There aren't any real mis-steps in my opinion.

Cover Art - 4: I really dig this cover. It is very reminiscent of Frank Miller and "The Dark Knight" which I'm sure was the point. I liked the brass knuckle gloves for Batman. That makes sense. Although a Batman with brass knuckles would kill the average human. The Bat symbol is a bit too big, but not something that is make or break for me, as I think it looks great in the actual pics of Affleck. Nice Job.