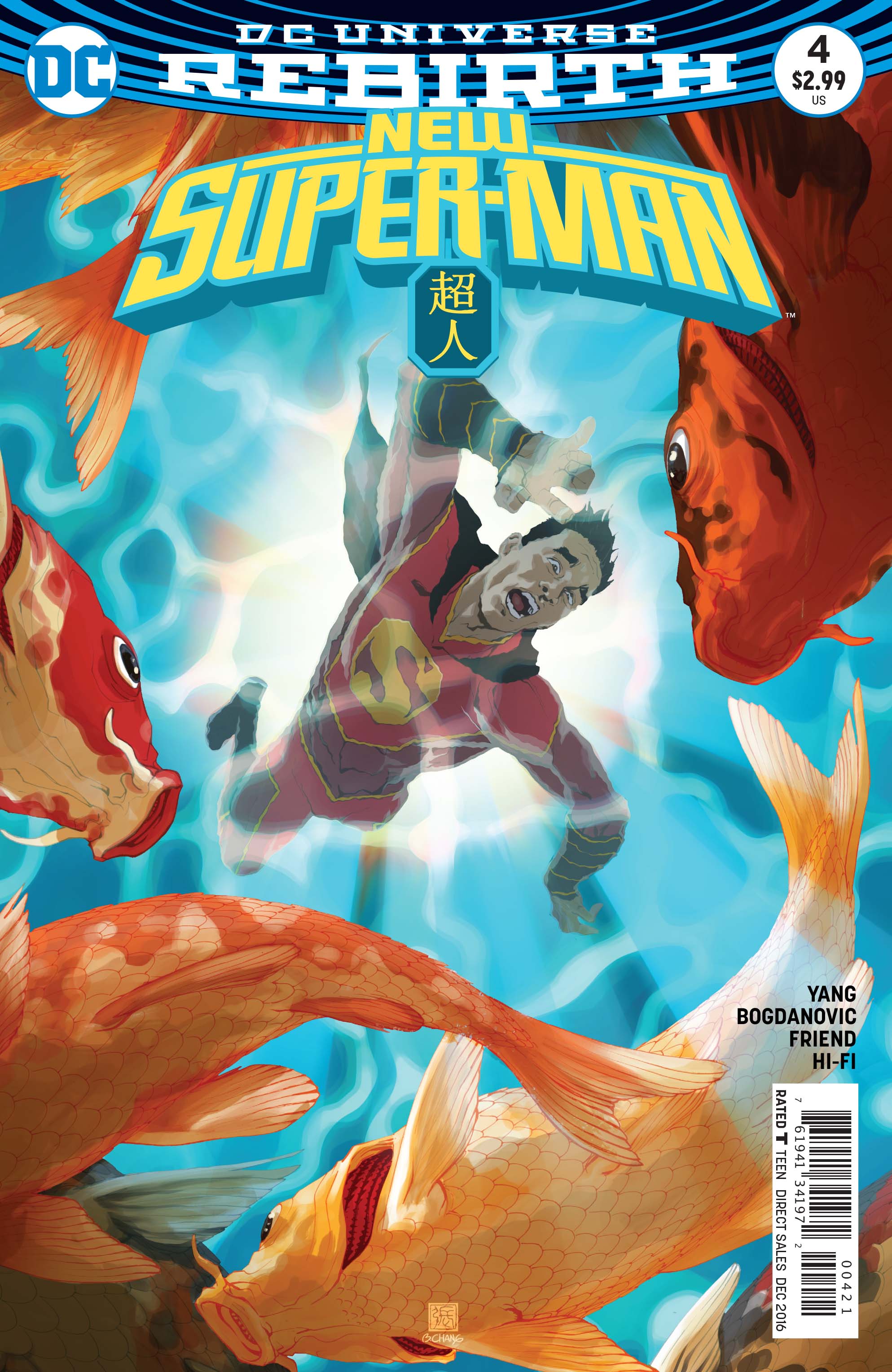 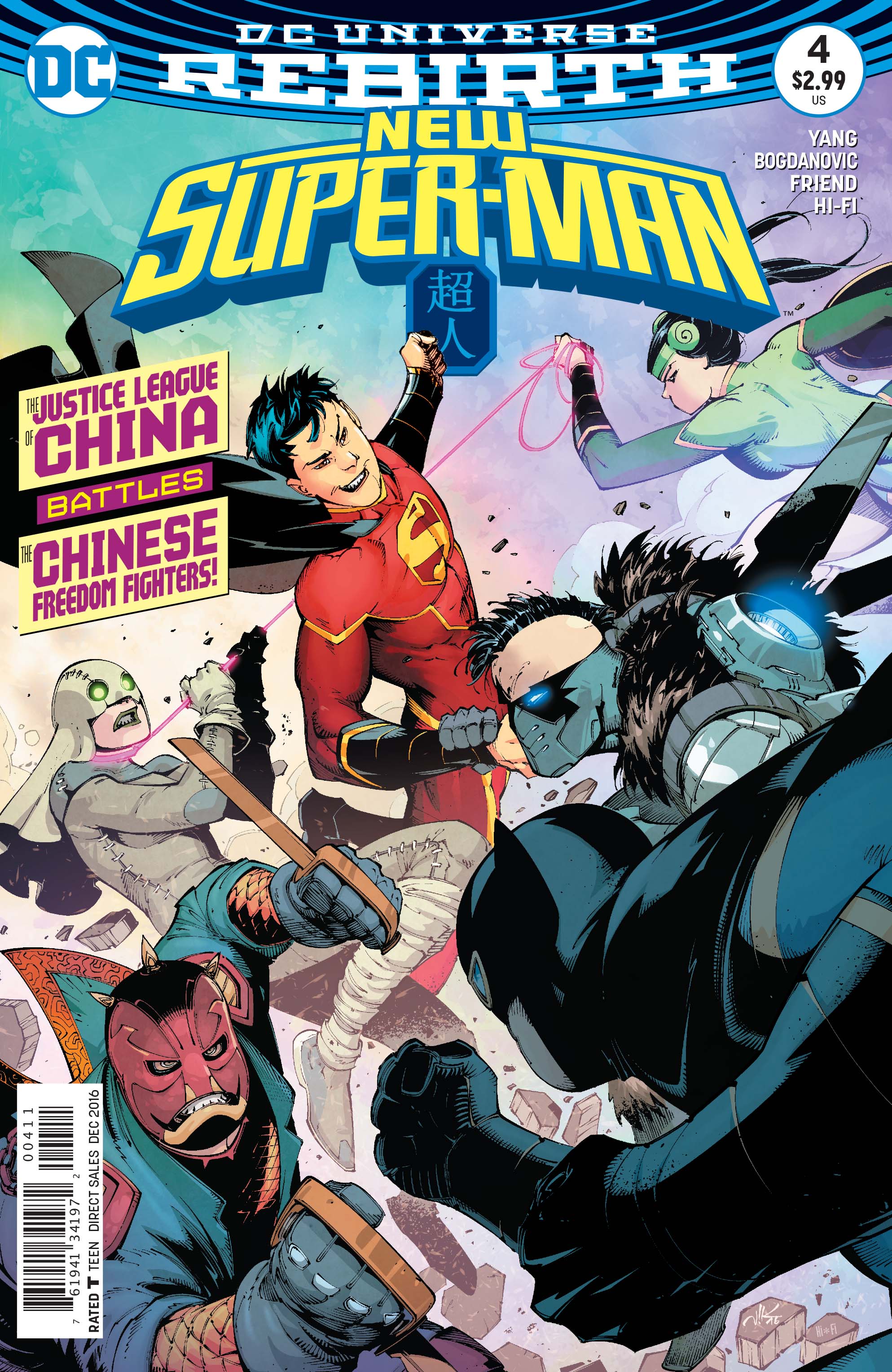 "Made in China" - Part Four

Kong Kenan is being suffocated by Blue Condor. Flying Dragon General demands that Baixi and Deilan drop their weapons. They comply, but Wonder-Woman has a trick up her sleeve: She uses her lasso to fight back. Bat-Man follows suit as Blue Condor prepares to kill Super-Man. Flying Dragon General hits Blue Condor upside the head, telling him that the plan wasn't to kill Kenan. Super-Man is given just enough time to recover and destroys Condor's robotic hand - the source of his powers. Kenan uppercuts Condor, sending him through a window.

Wonder-Woman reminds Kenan that JLC members do not kill or maim before Condor strikes back. With a swift kick from Super-Man, Blue Condor is knocked out. Deilan notices that Flying Dragon General is attempting to escape and warns Kenan. Kenan keeps the remaining Chinese Freedom Fighters from fleeing, but is confronted by Flying Dragon General.

The General tells Super-Man that he stands for nothing, unlike the American Superman. Super-Man is then offered an opportunity to put an end to The Ministry of Self-Reliance and their shady dealings. The General zaps him and flies off.

Laney Lan is snooping around the base of the Oriental Pearl Tower. She's managed to unlock an entrance without triggering an alarm. A Ministry employee plans to send a couple of guards down to intercept her, but Dr. Omen wants Lan to be brought to her. Elsewhere at The Crab Shell secret prison, the JLC lock up two criminals from their encounter with the Freedom Fighters.

At the Oriental Pearl Tower, Bat-Man, Super-Man, and Wonder-Woman prepare to tell Dr. Omen about their secret mission, only to find her talking with Laney Lan. Dr. Omen has decided to allow Primetime Shanghai to get the exclusive on the JLC. The team is pulled aside by Dr. Omen. They are to let Omen do the talking, and should they be asked any questions, they are to keep their answers short, polite, and vague. This is purely damage control after Kenan's slip-up in issue #2. If all goes well, Omen might be more willing to overlook their secret mission.

Back at The Crab Shell, Ghost Woman, one of the recently imprisoned super-criminals, starts retching. From her mouth comes a paper figure that transforms into a human male. His name is Folding Paper Man, and he had been hiding in Ghost Woman's stomach. A prison guard notices that Folding Paper Man has appeared and begins to alert the other guards. Before the message can be completed, Folding Paper Man kills the guard with a fatal paper cut.

Laney Lan conducts her interview and asks what The Ministry plans to do to protect Kenan's loved ones after the revelation of his identity. Omen is unconcerned, stating that Super-Man is so early into his career that he has no enemies that would pose enough of a threat, and they are all incarcerated. All except for one: Flying Dragon General. As the interview wraps up, Kenan requests to check in on his father. Omen instructs Wonder-Woman and Bat-Man to escort him home.

The inmates have taken over The Crab Shell prison. Human Firecracker, a villain with pyrotechnic-based technology, informs the other inmates that The Ministry truly has been developing an ultimate weapon. The Ministry had used it on Firecracker in an attempt to control his mind. They call it a G.M.S. - a Genetically Modified Starro. The Freedom Fighters plan to steal the weapon for themselves in their battle for truth, justice, and democracy.

Super-Man, Bat-Man, and Wonder-Woman have arrived at Kenan's home. Kenan enters to find his father watching television in the dark. He begins to tell him about the most recent developments, but is halted in his tracks as his father rises from his chair and steps into the light to reveal that he is Flying Dragon General.

Story - 5: What a twist! Looking back, it all makes sense, going all the way back to the first issue. Kenan's father was introduced to the reader as a conspiracy theorist that did not care for his son becoming Super-Man. The pieces were there all along.

The writing in this issue is just what it needs to be, delivering action and suspense with moments that allow the story to progress. The bit where Dr. Omen uses the press to pain a better picture of the JLC was probably the second strongest part of the issue. The reader knows that The Ministry is up to something. They wouldn't have the Freedom Fighters after them if they didn't. Even their own heroes are in the dark. Omen is the puppet master, and whether The Ministry is good or evil remains to be seen.

Something that I found interesting, but may have little bearing on the plot, is the fact that the team of villains calls themselves The Freedom Fighters of China. The Freedom Fighters are an existing group of superheroes on Earth X that have occasionally made appearances and fought alongside the heroes of Earth Prime. I'm wondering if maybe the Freedom Fighters in this book aren't secretly the heroes, albeit with some twisted morality that allows killing, and that The Ministry is actually the evil, using the JLC as pawns. Just a thought.

Yang continues to write an interesting and goofy, yet lovable character in Kenan. The playful banter between Kenan and Baixi is highly enjoyable.

This issue has me wishing the title were bi-weekly instead of monthly.

Art - 4: Bogdanovic is well-suited for this book. He can capture quite an array of emotions, and does action sequences fairly well. The only complaint I have is that sometimes, and very rarely at that, a facial expression or two might seem a bit off. Even still, it isn't enough to take me out of the book entirely.

Cover Art - 4: I really enjoy this cover. The water color background is gorgeous, and the characters are well-rendered. The only problem I have is that Kenan's face looks a little weird. Not bad, just a tad off.

Variant Cover Art - 2: I don't like this variant very much. I understand that sometimes, variant covers don't always have to stick to the subject of the story within. Sometimes they do, but most times, variants just happen to be something that looks like poster material. This cover is neither and does nothing for me.