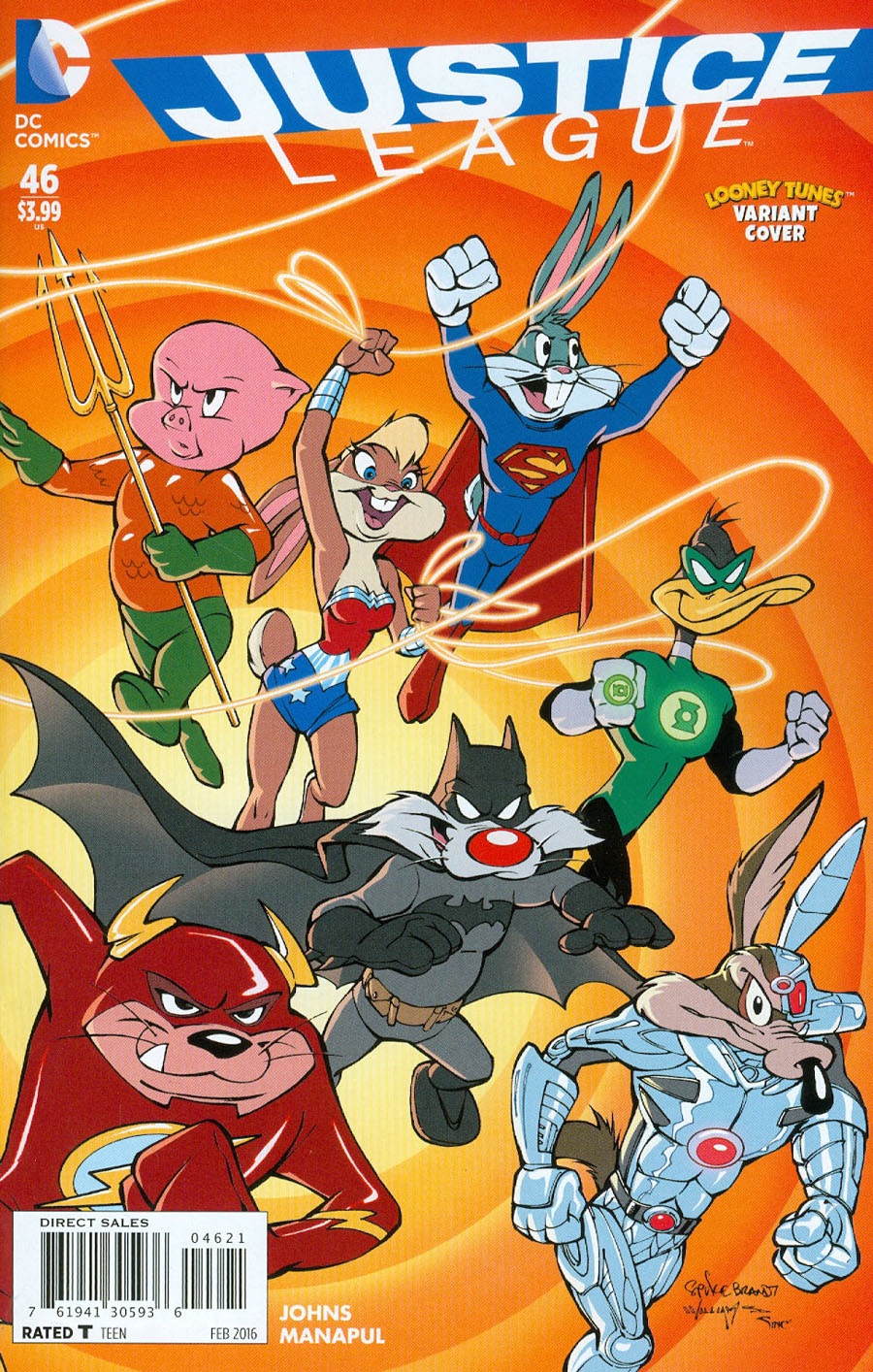 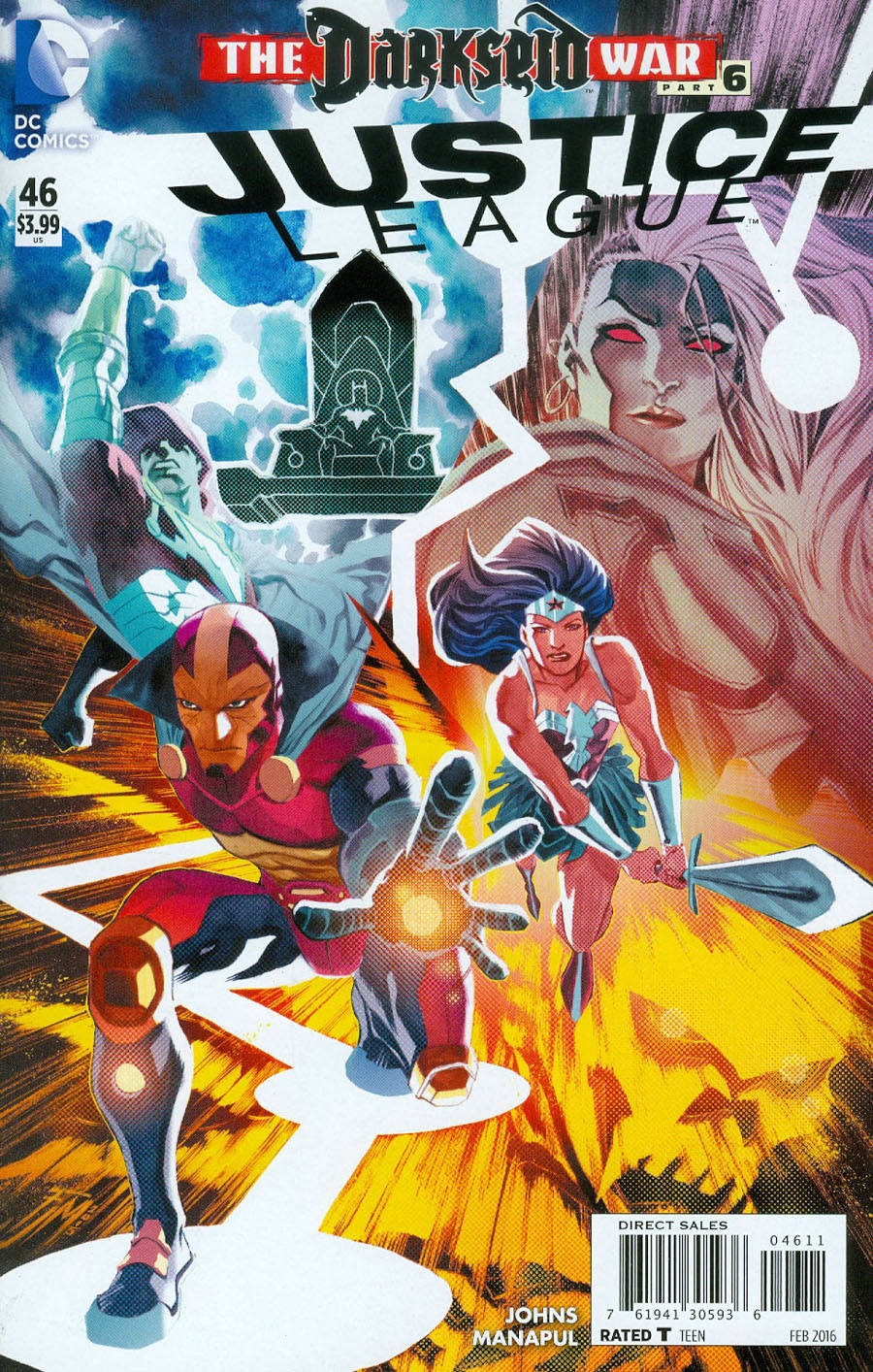 Click to enlarge
Darkseid is still dead. The remaining factions of the "war" continue to engage each other, leading to a confrontation between Mister Miracle and Kanto. Kanto is about to settle a long-time grudge, when Big Barda, Mister Miracle's wife, arrives and "pings" Kanto. Barda is vexed over the War interrupting her honeymoon with Miracle, and plants one on him, unconcerned of the consequences. The battle comes to a standstill, as Barda wisely states that without Darkseid there is no need for further combat, and Kalibak knows that his aggression is for the Anti-Monitor. The League surmises that that talking to the remnants of the Crime Syndicate may prove fruitful, as they have more knowledge about the Anti-Monitor than they do. However, this will mean breaking into Belle Reeve; a feat that Mister Miracle is apt for. Elsewhere, Grail and her mother, Myrina Black, locate the Anti-Life Equation, upon which Black declares that "death is too good for Darkseid".

Story - 3: The best parts of the story have nothing to do with the War that readers have been offered. What little that occurs in terms of plot movement, is inconsequential, at least for now. The acquisition of the Anti-Life Equation, a donnybrook here and there, they have little heft coming after Darkseid's death, particularly as this event is named after him. Darkseid's dead, the war should effectively end, story done. Thankfully we're given Big Barda and Steve Trevor to apply some genuine interest to an otherwise generic chapter. Big Barda's arrival is both humorous and heartfelt. In five pages she makes her presence known and rounds out her character as well. She's a warrior and she's on a mission, and that mission is save both her husband and her honeymoon. The kiss that she gives Scott Free speaks volumes as to what true love is: it won't be quieted or denied, and it's something to run to, rather than stifle or evade. The reaction to the scene is set squarely on Wonder Woman and Steve Trevor, and rightfully so, as they've shared one of the longest love affairs in comics, only to have it extirpated time and again.

Steve Trevor, the constant esquire-in-distress, always impressed me with his blatant honesty about his feelings for Wonder Woman from the onset. Here was a man who was struck on first glance. He was in love, in every nuance of the word. It was genuine feeling attracted Wonder Woman to him, and though time and influence would stretch that concept from sublime to silly, it was always returned to and in 1986, finally consummated. The resulting years proved anything but stable for Trevor, as he was dismissed and placed with Etta Candy, making him an uncle at best to Wonder Woman. The action was confounding, especially since no man filled the void that he left, not in 30 years time. Even when Trevor was reunited with Wonder Woman for the New 52 debacle, it was merely to allow her to springboard to Superman. This issue shows how well that action worked, as there has been no scene as poignant or romantic as Steve moving for what may be a final kiss from Diana. The obvious reason for the intensity, and the lack of it when Diana is with Superman is obvious: Steve loves her. His feelings are apodeictic as they were meant to be from his he was literally made for her, like Eve for Adam, and he has no compunctions about his feelings for her. Hopefully, as Wonder Woman alerts us that she and that poseur wearing an "S" aren't in love, this means a return to something real for the two of them. It will be grave, but as Trevor says "When isn't it for us?"

Art - 4: I prefer Fabok's work, but I don't know if he could have rendered the scenes with Miracle and Barda or Wonder Woman and Steve as well. They were very romantic and spot-on.