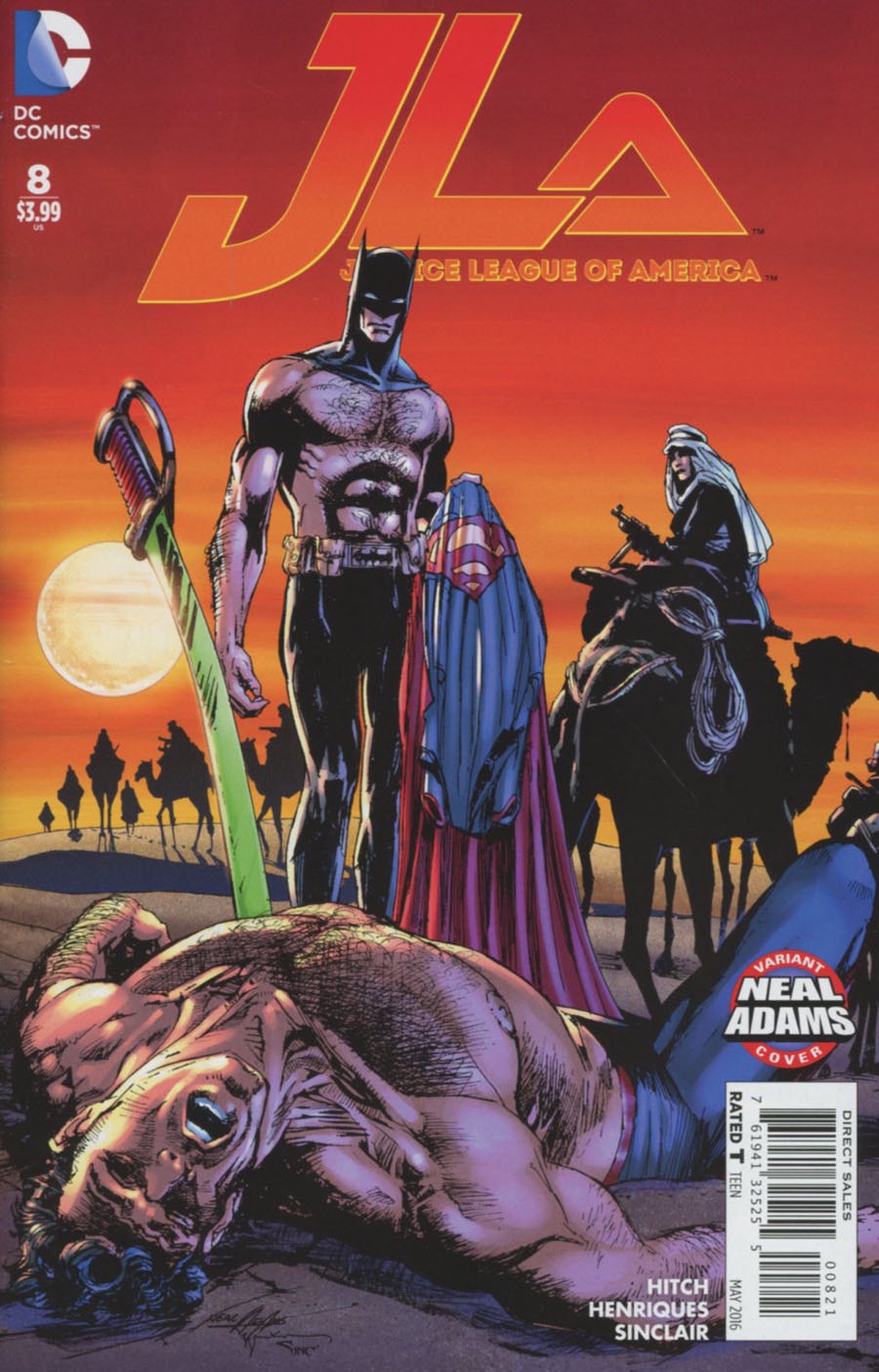 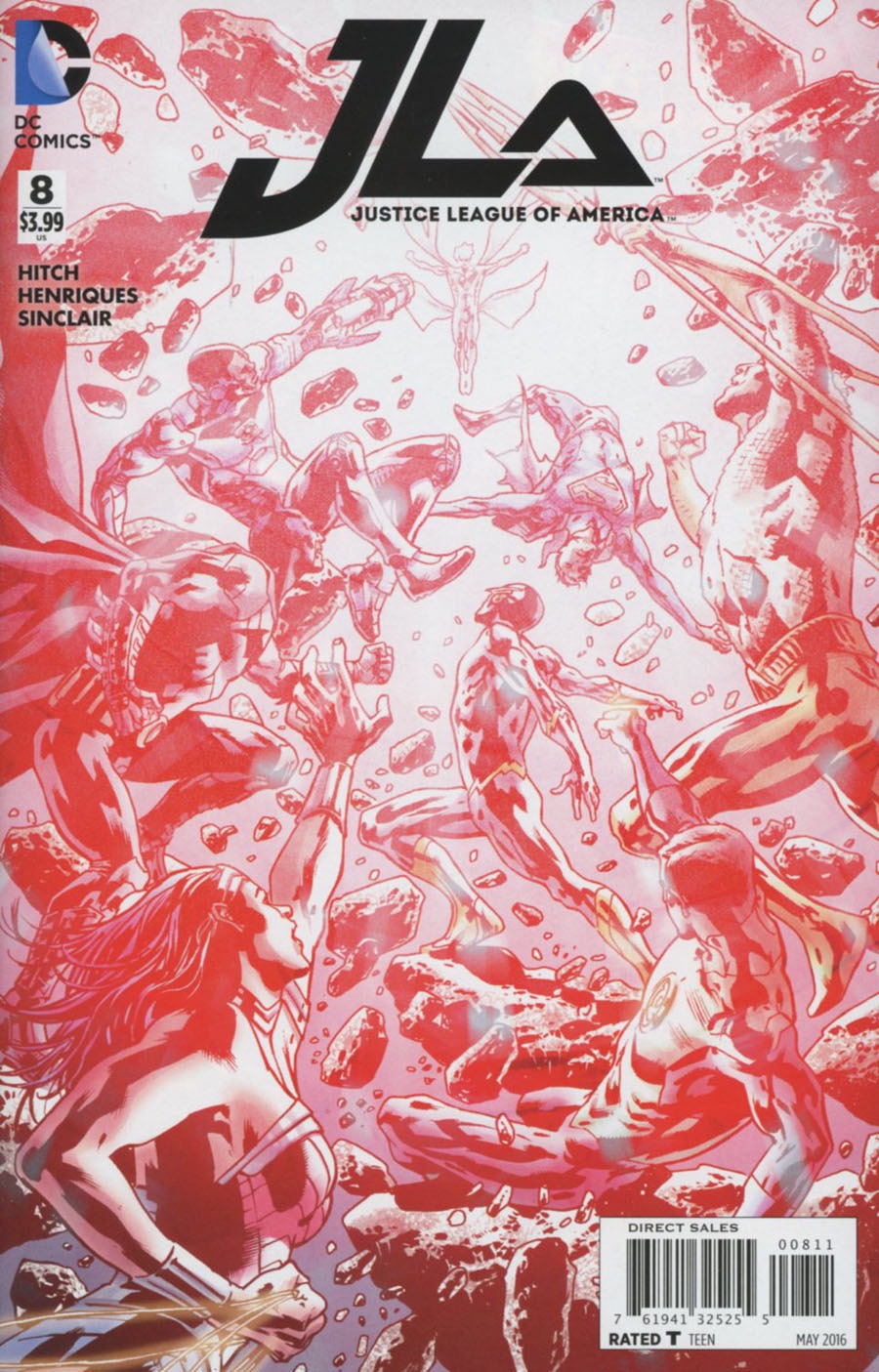 Click to enlarge
Brainwashed followers and prophets wonder where Rao has gone after watching the Cathedral abandon Earth in the previous issue.

What they don't know, is that Superman crashed the gargantuan satellite into the moon. From the wreckage, Superman and Rao fight until Superman plows them both into a mountainside back on Earth. Despite the one-sidedness of the exchange, Rao rises unscathed. The destruction of the Cathedral has severed Rao's connection to the satellites around the galaxy, but he is still able to draw power from the people of Earth. Therefore, Superman's blows only harmed Rao's coerced disciples.

Rao beats on Superman, who is badly hurt and out of options. Aquaman and Wonder Woman attempt to save the day with weapons they took from the Mt. Olympus Armory. Superman stops them, as again, it will only hurt the people of Earth. But Superman assures them: there's a plan.

One hour ago: Batman sends a transmission to Superman. "Just buy us an hour."

Present: A boom tube opens up, Wonder Woman pushes Rao through, the heroes follow. They tumble into the new Metropolis power plant.

A half hour ago: Batman makes a deal with Parasite. If he survives, he gets set free.

Present: Parasite jumps Rao, feeding off of his immense power. The idea is to use Parasite as a battery to recharge the damaged power planet (from the first issue) then shock Rao like a heart attack patient with an overgrown defibrillator. It should sever Rao's connection to his indoctrinated followers around the world.

After adding the power of Aquaman, Wonder Woman, Superman, and the Flash's speed force to the mix, the plan works, but at a cost. Weakened, Rao escapes to capture the Stones of Forever, and Superman is dead.

Story - 3: All the pieces are in place. The bad guy is exposed, and the good guys are no longer fooled. Much of the prophetic first issues comes to pass. That is, Rao has the Stones of Forever, and Superman is dead. But, unfortunately, this issue is a bit simplistic.

Hitch tries to break up the monotony by flashing back, twice. Both flashbacks, Batman telling Superman to stall, and Batman making a deal with Parasite, are relayed in a grand total of three panels. Both ideas could have been interesting if Hitch would have developed them. Instead, he wastes time with Wonder Woman and Aquaman making the same mistake that Superman has already made in attacking Rao.

Despite these problems, the issue was entertaining, but I could not help but feel disappointed that this was not the end of the arc. This issue had a climactic feel, and, honestly, I'm not sure where this story is going from here.

See, Hitch has not made clear what the Stones of Forever are. Therefore, we do not know why it is so bad that Rao has them. There is no suspense or expectation, the ending is merely delayed instead of extended by an exciting twist.

The good news: the story is moving along. The original plan was for a twelve issue arc. With the announcement of Rebirth they may need to condense the story. In this case, it is probably not a bad thing.

Art - 4: A problem with the one-note song that is issue eight, is that it does not give Hitch any variation in terms of blocking, facial expressions, or movement. Each panel is thematically the same from beginning to end. Therefore it is difficult to appreciate the job Hitch has done over the course of two dozen pages.

As usual he does a good, but not stellar job. He delivers on big sets and big action. But the art, like the story, is getting a bit too familiar. Again, to be fair, more of a story problem.

Cover Art - 3: Another generic group shot. This time washed out by a flash of red light. There is no real bearing on the story thematically or otherwise.