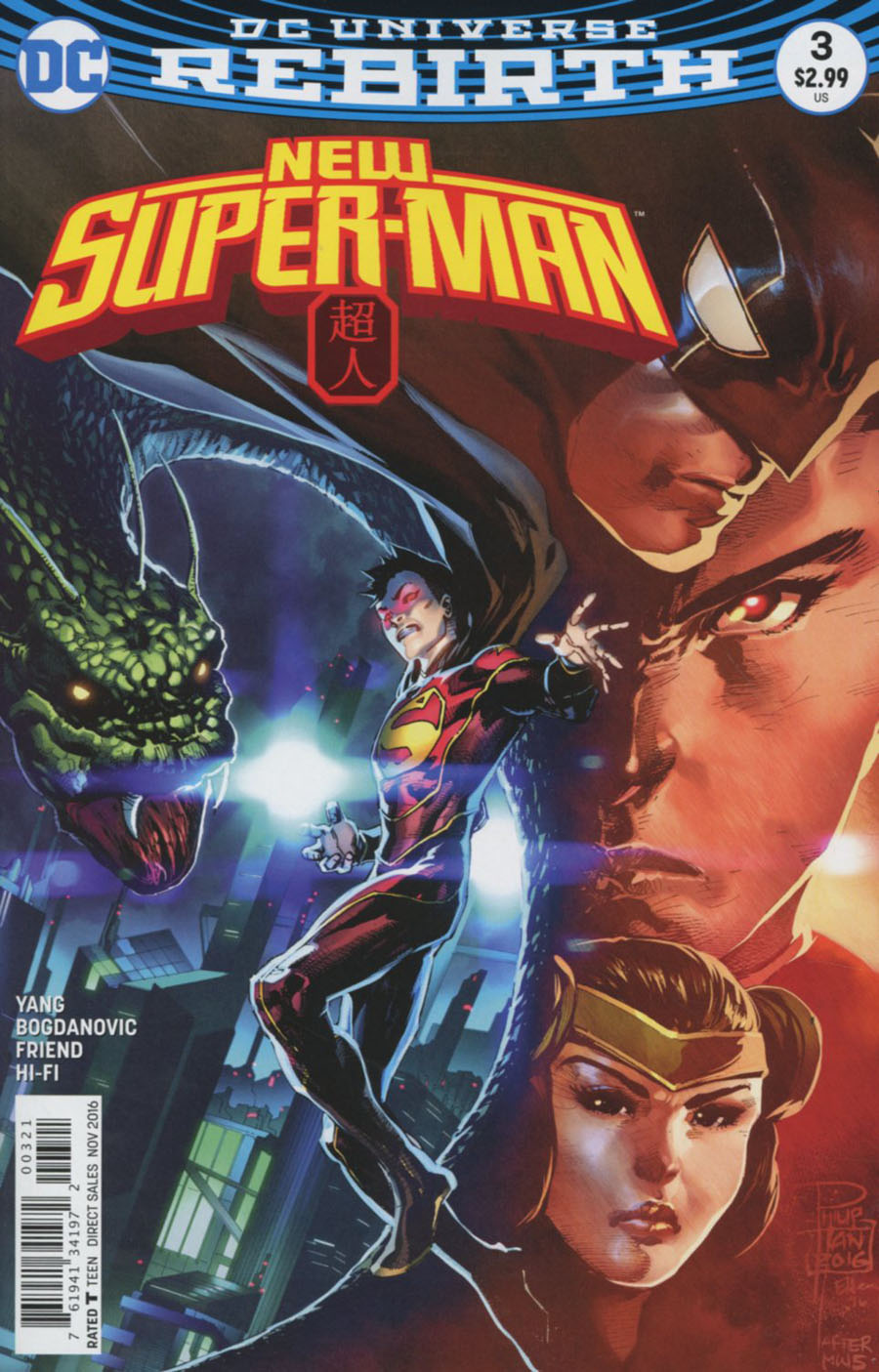 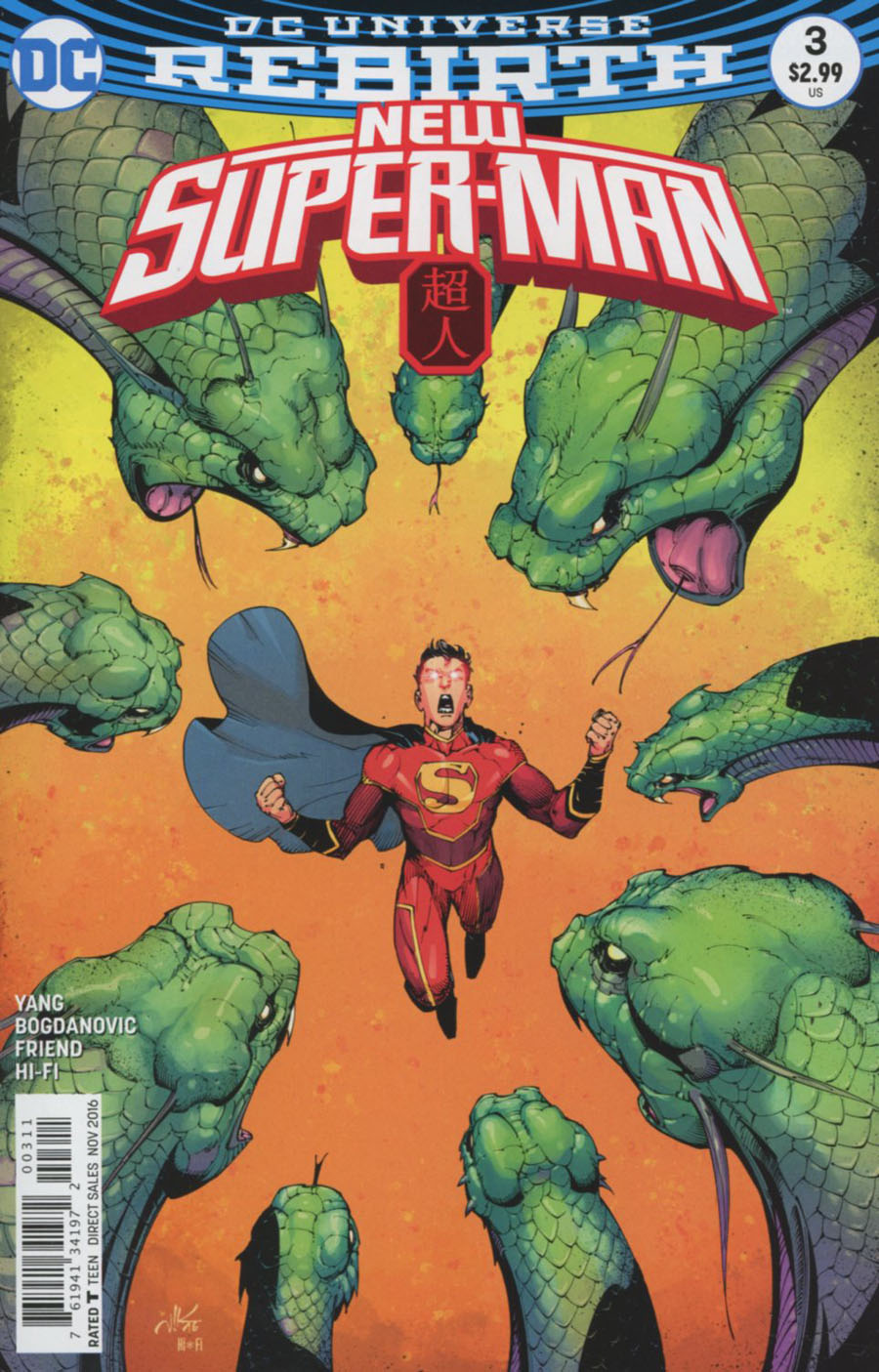 "Made in China" - Part Three

Kong Kenan has just revealed to Laney Lan that he is the new Super-Man. Dr. Omen instructs Deilan (Wonder-Woman) and Baixi (Bat-Man) to retrieve Kenan before he reveals anything else to the press. Kenan announces to the world that China has its own Justice League. Before Kenan can reveal Bat-Man and Wonder-Woman's true identities, he is wrapped in Wonder-Woman's lasso and escorted away from the scene. Elsewhere, Zhongdan sees the interview with his son and notices that the symbol on Kenan's chest is in the shape of an octagon. This is deeply concerning to Zhongdan.

The B.U.V. dives beneath the water's surface as Deilan, Kenan, and Baixi approach the Crab Shell - the only prison in the nation equipped to house China's most dangerous metahuman criminals. The Crab Shell was constructed five years ago, a year after metahumans started to appear in America. The team escort Sunbeam to a holding cell when a captive villain recognizes Kenan as the son of Zhongdan. At the Oriental Pearl Tower, August General in Iron has contacted Dr. Omen. Omen should have been imprisoned after the horrific events caused by her experimentation with the energies of New 52 Superman's solar flare, but has been freed by the Chinese government and allowed to create a Chinese Justice League. August threatens to shut Omen down. As the call ends, the JLC arrive. Omen is surprised to find that Kenan was able to remove the visor that inhibited his powers. She pulls out a high-tech gun and fires it at Kenan, weakening him immediately. Omen calls Kenan out on his stupid decision to reveal secrets to Laney, mentioning that Kenan's little stunt has endangered the Ministry of Self-Reliance, his teammates, and everyone he's ever loved.

Later, on top of the Oriental Pearl Tower, Deilan visits Kenan and the two reconcile. Baixi joins them where it is revealed that Baixi has vital information. Zheng Shiqiang, a marine biology professor, will be the next to fall under attack. Luo Longde, Wei Li, and Zheng Shiqiang all fund the Ministry of Self-Reliance. Kenan insists on investigating the situation before bringing it to Omen. Baixi, initially against the idea, reluctantly agrees.

Deilan, Baixi, and Kenan arrive at Dr. Zheng's office where Zheng confuses them for his would-be attackers. Zheng releases Xiangliu - an ancient sea monster with many snake-like heads. The monster's blood has toxic acid flowing through it, making the confrontation a challenge. Outside, Ghost Woman, Blue Condor, and Flying Dragon General approach the building. The JLC fight the monster, but are having difficulty subduing the creature. Kenan accidentally discovers that Xiangliu is not impervious to its own blood. As the beast retreats, the group of villains enter the room. Blue Condor uses his powers to suffocate Kenan. The JLC are now faced with an ultimatum: allow the villains free passage, or watch Super-Man die.

Story - 4: The more I read of this title, the more I'm sold on Gene Yang as a writer. Like many readers, I was not a fan of his run on Superman. There was something vital that was missing during his time on the title, and I did not feel that he was suited to take on writing duties for the Man of Steel. Whether it was his interpretation of Superman that I disagreed with or the direction that he was told to go in by the higher-ups at the time, I was thoroughly displeased with his work. When it was announced that he would be writing a title about a new Chinese Superman, I was skeptical, but thought little of it. Deciding to give the title a fair shake, I picked up the first issue and was pleasantly surprised. With each issue of New Super-Man, Yang falls more into my good graces. Kenan is a radically different character than Clark, and it opens doors for a lot of character development and story arcs. Because Kenan is a new character, Yang can mold him to be anything he wants, and it is clear that Yang has character development in mind when writing this book. In this issue, we see a more vulnerable side to Kenan. He admits that he revealed his identity to Laney in order to impress her. In the previous issue, we saw him put himself second in order to save another person. Kenan is an evolving character, and I think that Yang will continue to further develop him into a character worthy of calling himself Super-Man.

This issue is filled with great character moments. We see that Wonder-Woman has a compassionate side. The scene on the top of the tower was nice, and gave the reader a touching bonding moment between Deilan and Kenan. The battle with the beast, while relatively short-lived, is quite exciting and the ending left me eager for the next issue's release.

After Kenan reveals that there is a Justice League of China, there are three panels showing the reactions of Lex Luthor, Batman, and Perry White. Lex and Batman are intrigued by this new development and I am interested in seeing where the announcement of this team leads and the ramifications it will have on the DCU. It also addresses one of my previous, minor problems with the book: New Super-Man felt completely detached from the rest of the DCU and only had ties through altered names and mentions of Dr. Omen and The Great Ten's encounter with the Trinity during The Final Days of Superman.

Art - 4: I love the art on this book. It strikes the perfect balance of realistic and comedic. When characters need to express anger or fear, Bogdanovic makes them genuinely emote. Action scenes and big moments are dynamically rendered. However, the thing I love most about the art style of the book is that it doesn't take itself too seriously. In multiple panels, Kenan has a purposefully silly look on his face. He's a wise-cracking goofball, and Bogdanovic's art allows that personality to shine through.

Cover Art - 3: This cover isn't bad. It's well-drawn and does its job of striking an interest in the customer. Not even the heat vision eyes bother me as this isn't Clark and Kenan is a completely different character. My problems lie with some artistic choices. For starters, it suffers from the same issue that Action Comics (vol. 2) #30 did: the threat takes up more of the cover than the titular character. It isn't too big of a problem, but I would have preferred if Kenan were a little larger. My only other problem is with the background, or the lack of one, rather. The yellow-to-orange gradient is fine, but an actual background could have made this cover pop just a tad more.

Variant Cover Art - 4: I think this cover is a bit more of what I was looking for. The art is fantastic and gives a spoiler-free look at the contents of the book. A large amount of the cover is dedicated to Kenan, Baixi, and Deilan, with the monster only taking up a relatively small area of the image. At the risk of sounding hypocritical, I do not like the inclusion of heat vision eyes on this cover. On the standard cover, the heat vision eyes were fine as Kenan was charging directly at a dangerous creature, ready for battle. However on this cover, Kenan looks downright menacing. It is a disservice to the character and rather misleading. If the heat vision eyes were removed and the shadowing on Kenan changed to make him look less villainous, I'd consider this a perfect cover.