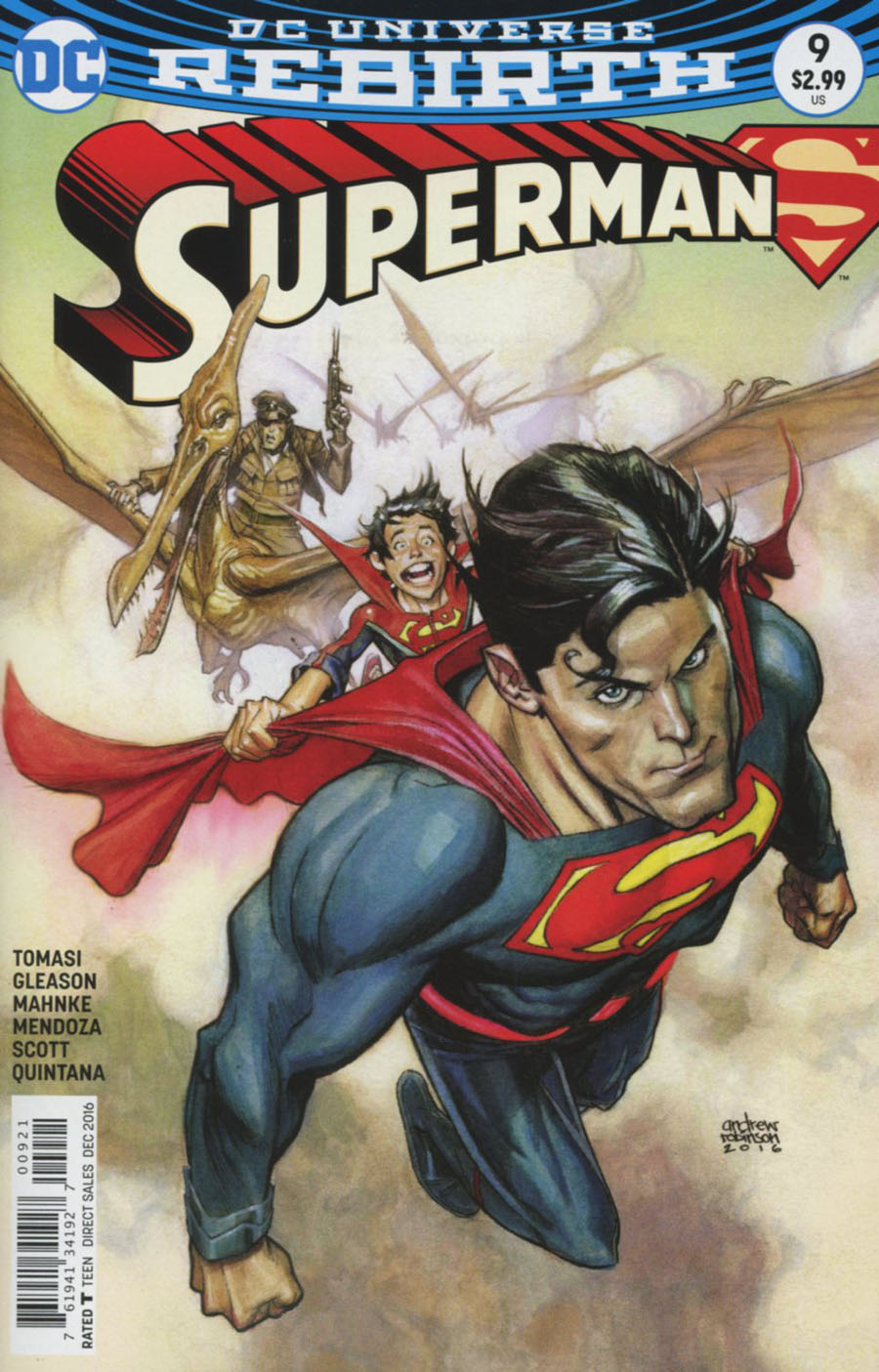 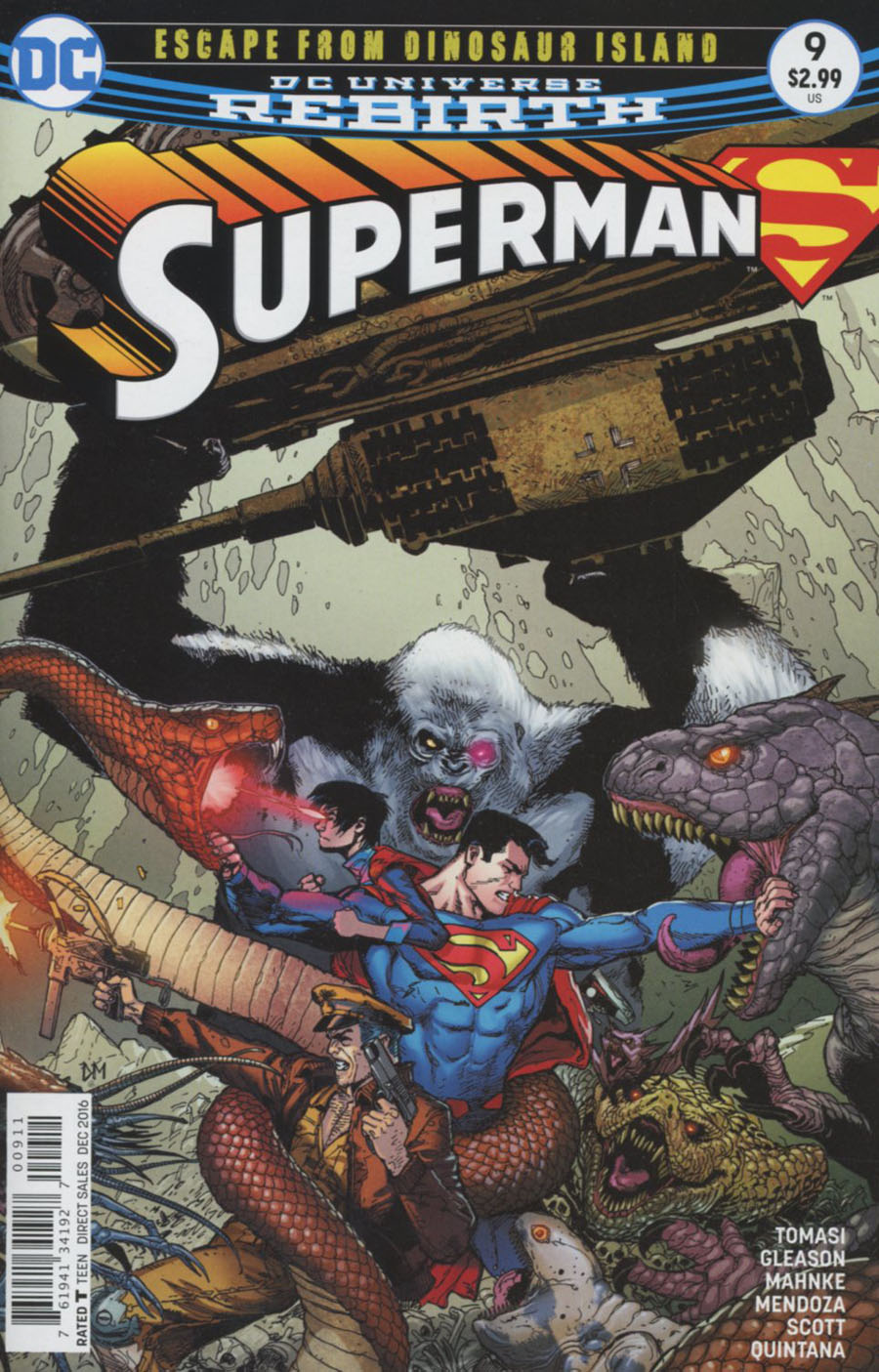 The Kent boys stand in the cave and read the story of The Losers. Jon notices the mention of O.S.S. Clark tells Jon about the Office of Strategic Services and how it was the precursor of the C.I.A. but the history lesson doesn't last as Captain Storm climbs into the cave and starts firing at the intruders.

Superman flies forward and knocks Captain Storm outside and demands answers. Captain Storm tells them how he was snatched away from the cave by a pterodactyl as food for its young. He was desperate to reunite with his friend John Cloud in the cave but by the time he had returned, Cloud was dead and all that was left was his story scrawled on the walls.

Storm asks about the outcome of the war, he is from 1940s and is relieved to hear Tojo, Hitler and Mussolini were all defeated. Clark asks him if he wants to know today's date. Storm declines telling them that just be looking at them and their dog he can tell his time is long gone. He offers to help them but only after they escort him to the gravesides of The Losers to lay Cloud to rest with his team.

Jon draws a picture of the transported box that got them here and Storm recognizes it or at least something similar that one of the prehistoric monsters has possession of. Storm suggests he grab weapons ready to fight the beast and while he does Clark finds Jon crying. Clark reassures Jon that they will get home and see Lois and that they're going to get yelled at for going missing. He smiles at his son and tells him that he often forgets that Jon is only ten years old.

When Jon returns to the cave he presents Storm with a gift carved by Clark. Storm smiles as he unwraps a strong, more realistic shaped wooden leg to replace his missing one. Jon asks Storm about how he lost his eye and leg and is shaken to hear the war stories.

Superman offers to carry Storm but instead Storm whistles for a tame Pterodactyl and the five of them head out to find the devices. Clark is surprised, assuming Storm had killed the Pterodactyl, even more that he had named one of the babies Myrna and convinced the mother and babies to trust him.

Superman notes a little seismic activity. Storm warns them that the creatures in this swampland area are very different from the others they've encountered. Sure enough as they approach the centre they find a giant white gorilla sitting atop a mountain of tanks, boats, planes and weaponry. One of its eyes has the machinery in it that was similar to that which was in the giant octopus they fought that attacked a sub.

Captain Storm urges them to concentrate as the gorilla has quickly amassed an army of monsters that attack with all their might. Clark allows Jon to fight no holds barred alongside Krypto and Storm while he tries to get closer to the gorilla. When the gorilla reveals it has a stockpile of torpedoes and mines, Clark holds back, Jon igniting the weapons.

The white gorilla is unscathed but Jon is hurled back with only Krypto to rescue him. As Clark has a fistfight with the gorilla, Jon finds the cube in the remains of weaponry as it begins to crackle and spark. Storm urges them to hurry as the forces become stronger and overwhelming. Clark removes the device from the gorilla's eye as Jon does the same with the cube. It begins to start the teleportation process and at speed Clark grabs Storm by his wooden leg. The old war hero warns them that he can't allow the creatures to teleport with them and in an act of bravery he shoots off his wooden leg as the portal shuts.

Krypto, Jon and Clark suddenly reappear in the Fortress but in the process of transporting them the cube burnt itself out and they lost Storm's wooden leg and the alien device. Superman assures Jon that Storm wouldn't go down without a fight and someday they'd find a way back and get the answers.

Elsewhere a shadowy man examines the wooden led and alien device looking at a strange purple creature. His motives cannot be good...

Story - 5: Seeing Captain Storm back in action, the heroism and the mutual respect between Clark and himself. It just feels like a deeper story than just fighting monsters on an island. The awe in Jon's face as he hears first hand the camaraderie between soldiers and conversely the sadness at the horrors of war, it just speaks volumes about how brilliant this creative team is. I like that the issue's past also seed into the present, i.e. the giant octopus. I hope we see more of that.

I wasn't clear as to what the monster was at the end? Is that a new take on Starro? We already have a shadowy figure in Mr. Oz but who is this second one? All questions I hope we find the answers to soon!

Art - 5: He can take the dramatic scenes, like Jon's wonderment and his sadness and make them feel real. The dramatic scenes are no less detailed and immersive than the action. This two parter is some of his best work.

Cover Art - 4: Go pick up some back issues of the pulp heroes, there you'll see a plethora of covers and stories like this. I love that the team on this book, also that on the Cave Carson, are embracing the history of comics and rather than rebooting them. Embracing them and creating new stories with them.

Variant Cover Art - 4: This cover evokes many eras, it has a flavor of the movie serials, the mystery of the golden age and the fun of the silver age all rolled together. How fun is this cover? The elation on Jon's face is how I felt seeing all the easter eggs inside. Superman, Superboy, Krypto and The Losers' Captain Storm on one cover? WIN!