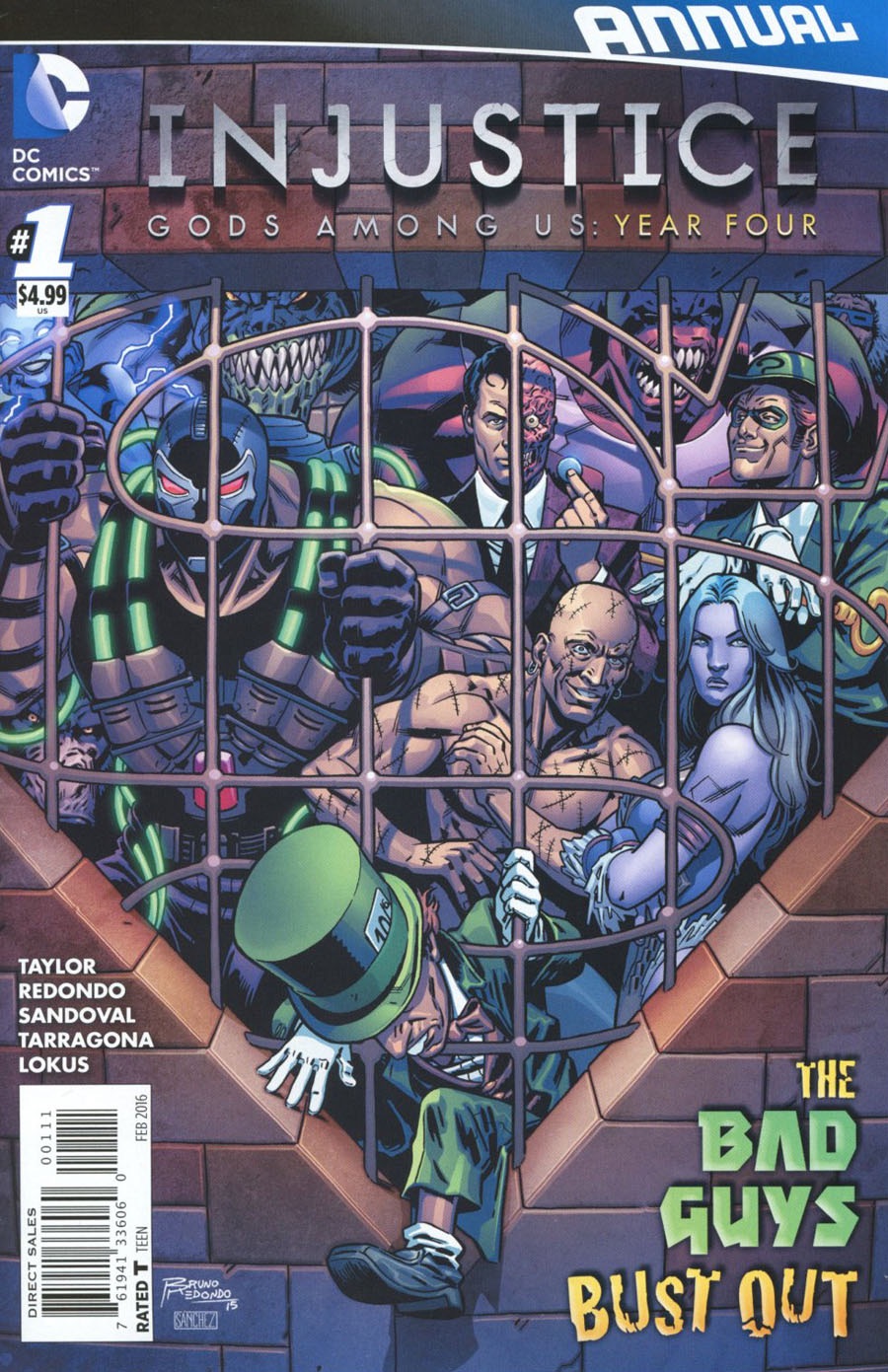 Click to enlarge
A terrorist attack brings Regime Superman and Flash to Centennial Park. The terrorists are quickly apprehended, but one, Luke McDunnagh, is the son of Plastic Man. The League deem that he must be punished, despite his relations, and once done, Plastic Man seeks to have him released. Plastic Man's request is denied, and Plas goes about freeing his son, releasing a prison filled with supervillains in the result. In return for their freedom, Plas asks the villains if they'll make life difficult for Regime Superman, while Plas decides to lay low until everything with Regime and the League are sorted out.

Story - 1: While it's genuinely nice to see Taylor back for a quick jaunt, and on the book that made him bankable, it's just too much to ask of a discerning reader. The premise here is the same as was done for Year Three, in which Constantine manipulated events to protect his daughter. Now, we've Plastic Man using the well-worn "Breakout" trope, in order to jump-start Year five... because there is no Year Five. There's a just a machine that is beholden to perpetual motion. The idea that Plastic Man could accomplish what he did isn't implausible. Plastic Man's abilities make him just about invincible and immortal. However, the idea that the Flash couldn't react in time Plas's attack is dubious, and worse, the League knows that he'll try to break his son out. They know it. The best result is to simply watch him escape? If the story at least presented the breakout well, that would mitigate circumstances somewhat, but readers aren't even given that. Plas gets in, infiltrates, gets his son, gone. There is no hitch, no complication, and never a doubt that Plas won't get away. Why? We're already told as much in Injustice: Gods Among Us, Year Five #1. The annual has to set-up the Year, because there isn't enough room, or talent for that matter, to do it within Injustice, proper.

While I can understand Plas' motivations, he, like Batman, are no better than Regime Superman in their actions. When you have to make a deal with the devil in order to get the job done, it's probably not a job worth doing. Batman has aligned himself with Harley Quinn, a criminal who aided in killing Lois Lane, and seems at ease with the decision so much that he's going for broke with the idea. Plastic Man releases dangerous criminals, asking them to give Regime Superman a hard time, and unconcerned if in doing so, anyone else's life is made hard, quick, or dead. I can empathize with Plastic Man's predicament, but Plas could have rescued his son, without releasing anyone else. He's able to break in with ease, and as his son shares his abilities, exiting would be just as simple. Everything else that occurs is the result of Taylor cashing in the Plot Coupon needed to extend Injustice past its receivership. The video game dictates all, and try as Taylor might, there's no escaping that edict. Count on there being a Year Five Annual. DC needs the money.

Art - 4: The Plas scenes are great. Flipping Metamorpho the bird was unnecessary, but it was the lowest moment in an otherwise fun romp with a character known for just that.

Cover Art - 4: An ominous spread; less for the villains, and more for the symbol they seek to escape from and what it now represents.