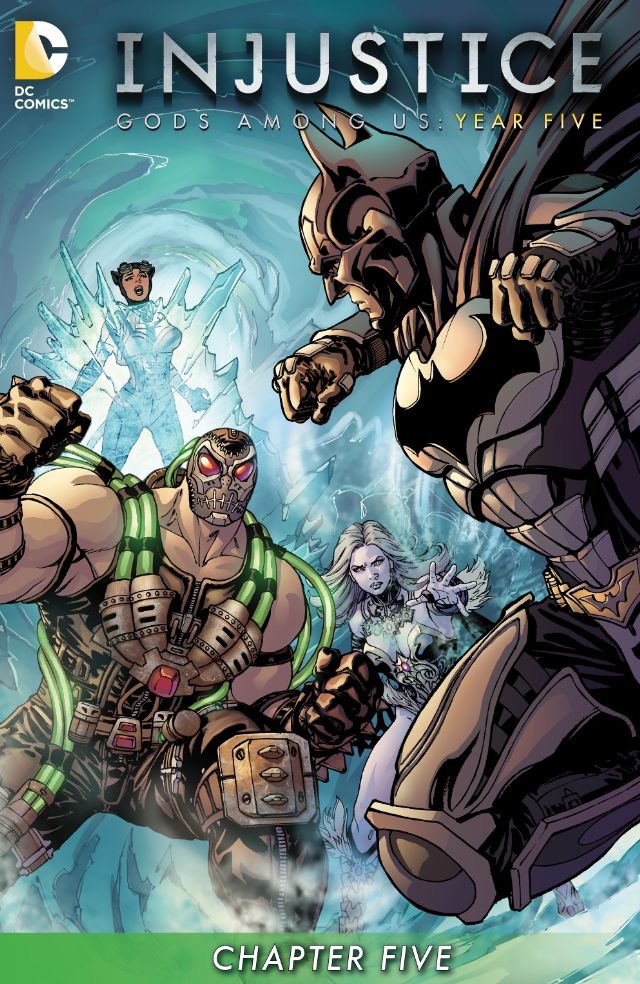 Click to enlarge
In Ingolstadt, Germany, a bizarre looking fellow is befriended by an older gentleman, who provides him with a classic Superman outfit. On looking in the mirror, the fellow reverses the "S" he believes is backwards, and asks for more soup. The Batman learns that Catwoman has been abducted, and though it's obviously bait for a trap, Batman will go to her rescue. A brief discussion with Lex Luthor reveals that the supply of "green pills" has nearly been exhausted. Damian Wayne, now dressed as Nightwing, encounters the remnants of the League of Assassins, who wish him to become their leader. Damian refuses and (of course) a fight ensues, leading Damian to kill them all. Wonder Woman decides to go and sort things out with Bane, Killer Frost, and Catwoman, unwilling to torture her to gain information. Catwoman's torture proves unsuccessful, and so Bane decides that a different tactic is needed to bring Batman out of hiding.

Story - 1: This installment moves better than the last, which isn't saying very much, but it's an improvement nonetheless. Damian Wayne's insertion is both random and unneeded. It's obviously to check the box for his character, who becomes Nightwing in the video game, but with such limited room in each issue, giving Damian eight pages to do little more than kill with style, if that, doesn't seem a very wise move. Such attention might have been better focused on the torture of Catwoman, or genuine debate between Regime Superman and Wonder Woman, but when has wisdom ever stopped Injustice from doing something that wasn't sensible, just to crank out another installment? The news of the "green pill" being low is curious, as one would have to believe that either Lex, Regime, or both would have known the paucity of materials for what was created, but perhaps it will lead to some improvement in the confrontations between the Regime and the Insurgency, with the pill getting in the way.

Luthor advises Batman that the line he's made for himself may need to be crossed, i.e. Batman will have to seek aid of those who kill. I understand that fans of the series will pardon such an obvious error, but Batman already has a killer on his team: Harley Quinn. Batman may not recall, but Harley Quinn aided in killing Superman's wife and unborn child, a crime for which the Joker paid, and Harley has been totally released from. Harley abducted Billy Batson as well, with impunity. Wonder Woman's moral stance comes across as cheap, if one remembers that she crushed a man's skull because he was guilty of rape. Torture, no. Murder, that what we're here for. Injustice is best enjoyed as a trifle, a cartoonish cartoon, sent-up as supposedly something more. However, the amount of PIS that is needed to accept it even on a trifling basis amounts to self-flagellation. I would think readers deserve at least some consistency for at least the blatant occurrences in Injustice, but as we're in Year Five, it seems some would rather crack the whip.

Art - 4: Redondo achieves a nearly voluptuous line for the majority of the issue, the lightest being his rendering of Regime and Cyborg, but Nightwing, Wonder Woman, and especially, Bane, stand out as diligently drawn.