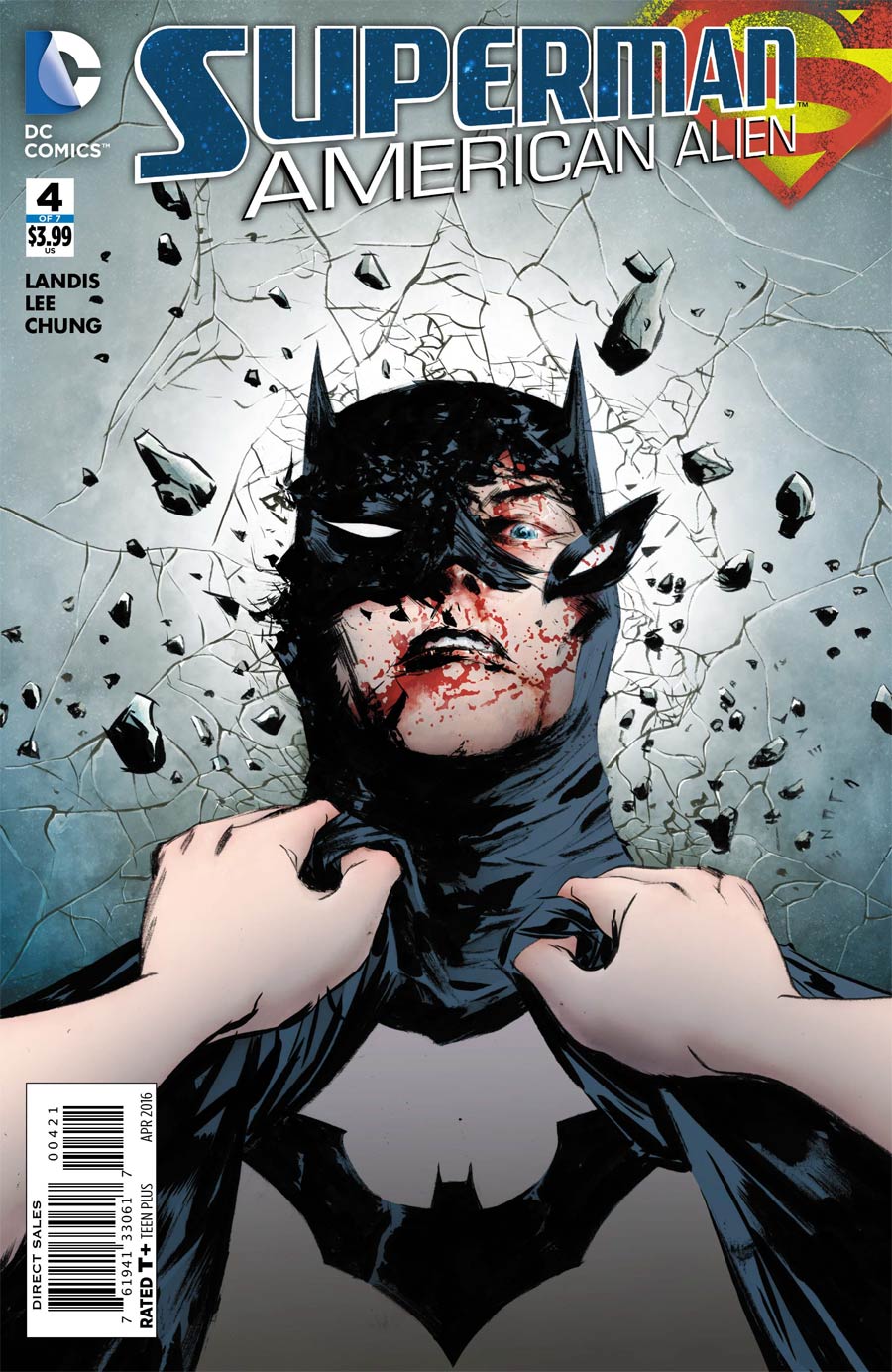 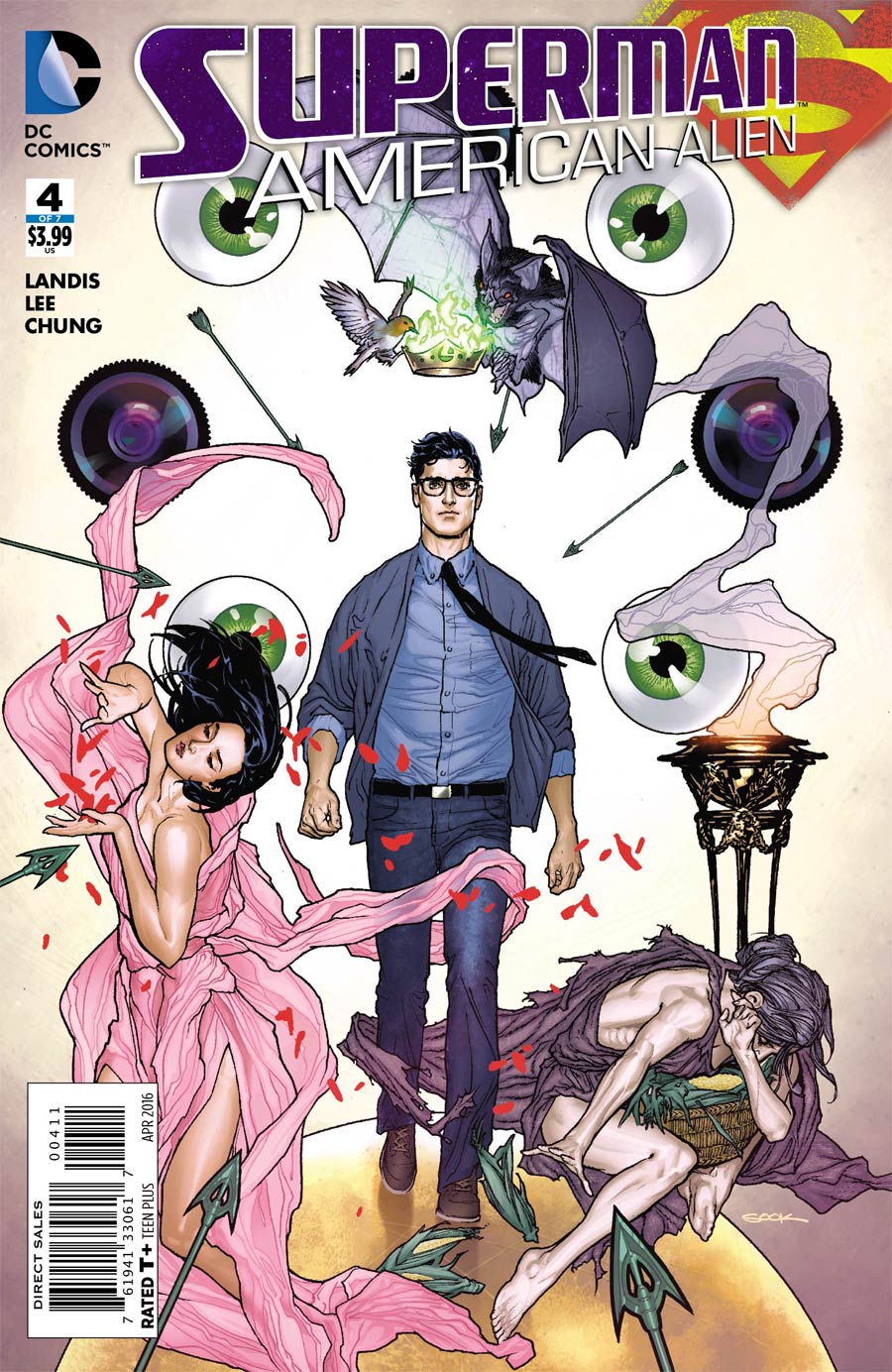 Click to enlarge
Clark Kent arrives in Metropolis thanks to a Daily Planet program and almost immediately his truck is stolen. He attends a press conference given by Oliver Queen and meets Lois Lane, putting his foot in his mouth in the process. Oliver believes Clark to be Bruce Wayne and escorts him to a waiting helicopter. Once the confusion is cleared up Oliver tells Clark all about the change that's occurred in him since being stranded on an island.

The helicopter lands and they are greeted by Lex Luthor. Oliver asks Lex to give Clark a quote. Lex indulges Queen and talks about how people really aren't important but he is. When Lex finds out that Clark is just a student he drops him off on the floor where the daycare is located. There Clark meets Dick Grayson and they talk about Gotham and the Batman. Clark returns home and begins working on his story when the Batman crashes into the room and begins to interrogate Clark. This doesn't go well for Batman and Clark manages to rip off his cape and cowl revealing that Batman is actually Bruce Wayne. Bruce manages to get away and as Clark examines the cape and cowl he listens to a message from Lois Lane.

Story - 4: This was an entertaining issue. I enjoyed Landis' dialogue and his take on Lex Luthor, which is right in line with how Lex has been portrayed over the past ten or so years. He's arrogant but there is a certain honesty to it because he really is that smart. The conversation with Ollie at the beginning of the issue was especially good and I liked how it mirrored Lex's monologue thematically. Both men see their place in the world and their pasts have shaped that perception. The introduction of Lois was cute and I liked that Landis didn't play the, "Lois doesn't like Clark because he's green or a farm boy or new or whatever" card. The fact that she wants to "team-up" with Clark at the end of the issue made me smile. This is a Lois that I think Clark should and could fall for.

Landis' take on a young Clark Kent was also well done. He doesn't quite know what he wants to do with his life beyond reporting. He also seems to be hesitant to use his abilities in public and is still a little naďve to city life as evidenced by his truck getting stolen at the beginning of the issue. Despite this he was inquisitive, showed initiative and his reactions to things was very human.

The main problem I had with this issue is that ostensibly this book is supposed to be about Clark Kent (and to be fair it is) but Landis keeps trotting out characters like Oliver Queen and Bruce Wayne. Part of my problem is on a story level because while the encounter Clark has with Queen is great and it does serve the story it also detracts, to a certain extent, from Clark being the center of attention. The fight with Batman was great and while I appreciated that Clark didn't back down or act afraid it played into this thing that most writers seem to have when writing Superman stories that they just HAVE to include Batman. Like Clark isn't enough. What's worse is that Clark seems to look at the cape and cowl at the end of the issue and start to solidify his desire to help people with his abilities. Again, it was a well written scene and I liked Lois' message commenting on more than her offering to team-up with Clark and it could be that what I am about to write is dead wrong but it seems like what Landis is hinting at is that Clark is inspired to become Superman because of Batman.

I hate it a lot. I hate it with the heat and intensity of a thousand burning suns. I hate it more than Landis' video about the Death of Superman and I really freaking hated that video.

Having Clark be inspired by Batman in any way diminishes him as a character. It also elevates Batman to a status that he really shouldn't have. Batman is a great character and in all honesty I was a Batman fan before I became a Superman fan but to me they are equals. There was a time where it was suggested that Superman was the inspiration behind the second age of heroes but I never really bought that because I thought Batman and Flash and Green Lantern and Aquaman all stood on their own and just happened to start their super-heroic careers around the same time. Having Clark be in any way inspired by Batman is so wrong headed and tells me that while Landis may like Superman and Clark he doesn't seem to fully understand him.

Despite this major annoyance I did enjoy this issue. It was a nice look into Clark's early days in Metropolis and the writing was strong.

And in all honesty I could be wrong about the Batman thing but I don't think I am.

Art - 3: Once again I recognize when an artist is talented and yet I don't like his or her style. I have never liked seeing Jae Lee draw Superman or Batman. It doesn't feel right to me and my sensibilities. He knows how to lay out a page and he knows how to tell a story with his art. It's just not for me.

Cover Art - 3: What a weird cover. It's not bad and I like that there is a lot of symbolism, especially when it comes to the Bat and the arrows but it's just strange. I am also not in love with hipster Clark Kent.

Variant Cover Art - 4: This is a striking cover. I should be upset that Batman is taking center stage on a Superman book but I just don't have it in me tonight.