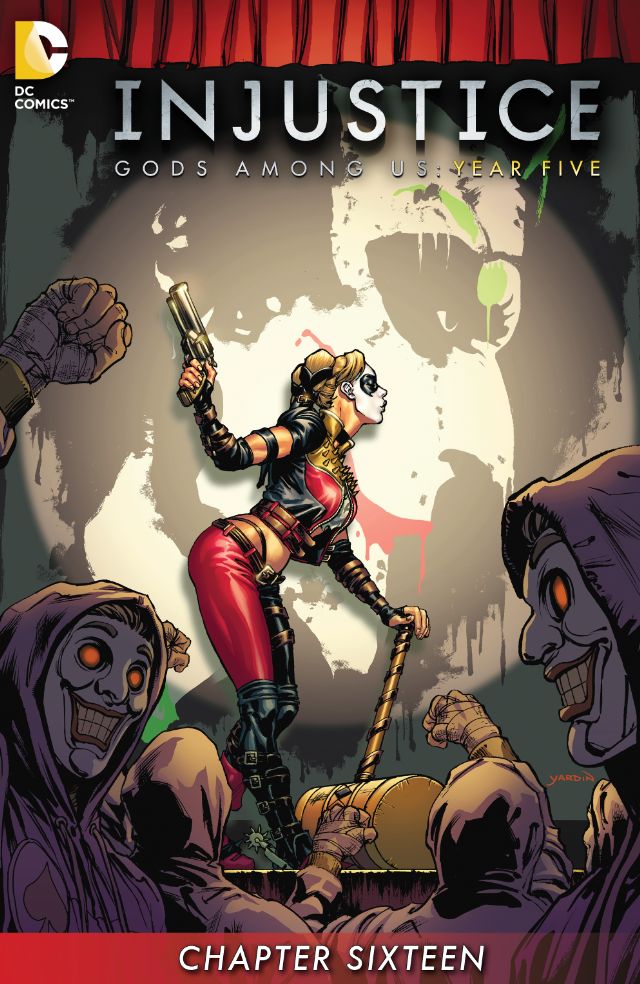 Click to enlarge
Batwoman fights those of the Joker Underground dumb enough to contend with her. Once they see the futility, they listen to her and Harley Quinn, who support their assembly, but not in the Joker's name. They leave the assembly to discuss things amongst themselves, but Regime Superman has discovered the Joker Underground's whereabouts and arrives in seconds. Regime trains his heat vision on the assemblage and murders them all, speeding away once the deed is done. Harley and Batwoman return to the scene, but it is too late to assist anyone, as all that remains is death and flame.

Story - 3: Regime Superman being the evil despot that he's been crafted to be, is a welcome sight. Better the murderer than the fop who mutters "Bruce" anytime he sees the Batman. Regime murdering the Joker Underground while they chant, "Joker! Joker!" channels the worst acts of Ultraman or the Plutonian, and it nearly works, except for the nagging issue of Harley Quinn. Harley's words, "Mistah J was a kill-crazy louse," should be followed by someone screaming, "And you were with him every step of the way!" The only reason Harley isn't with the Joker, is because he's dead. It has to be of public record, that what Harley did, if not, Green Arrow would have never spirited her off, but is Harley Quinn, as a character, so popular that she can placed into a show as a superheroine, while murdering elsewhere? Regime is rightfully called for his tyrannical actions, but Harley? The blood of the Underground is on her hands, but nobody cares or even seems to understand why.