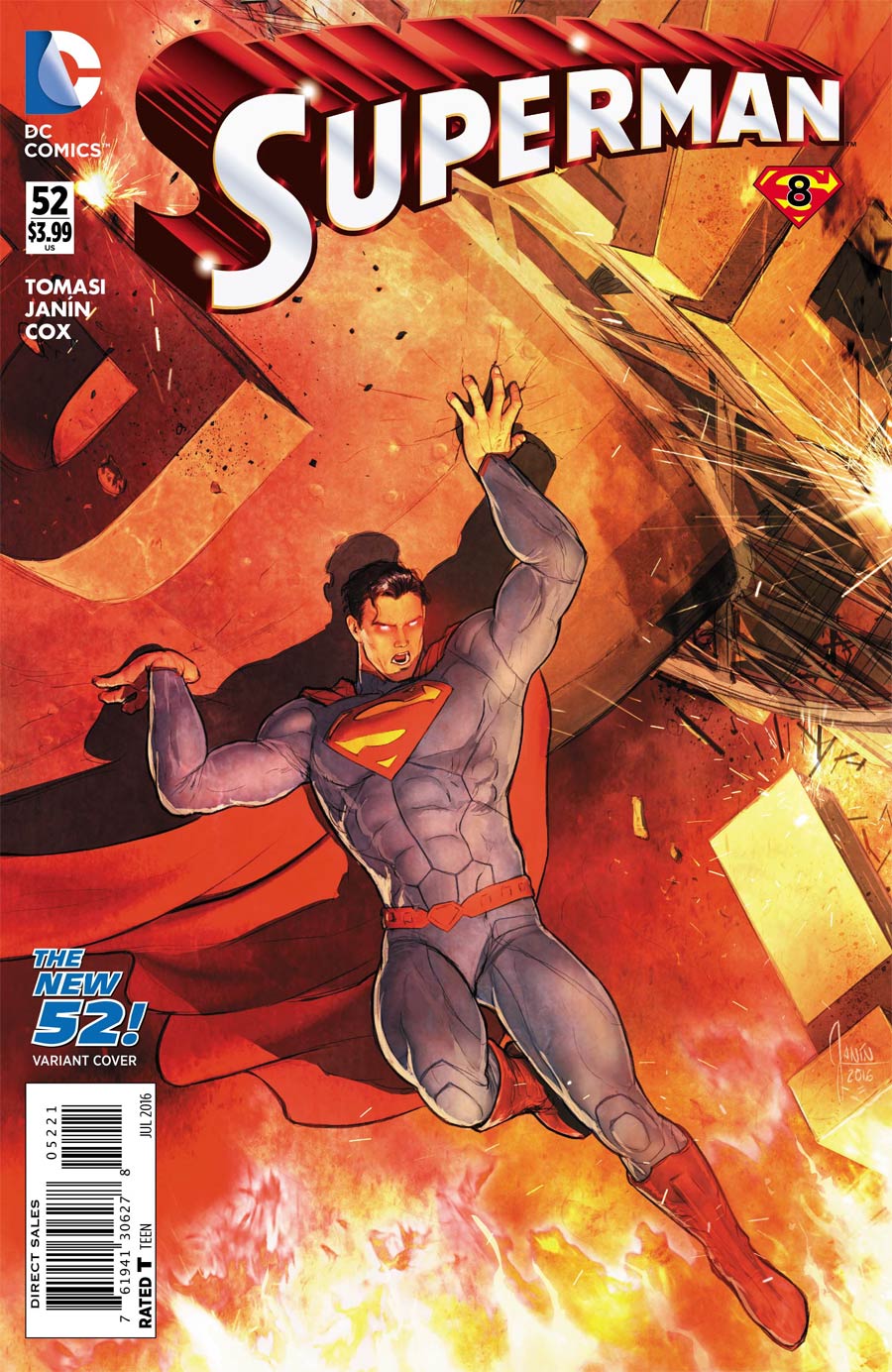 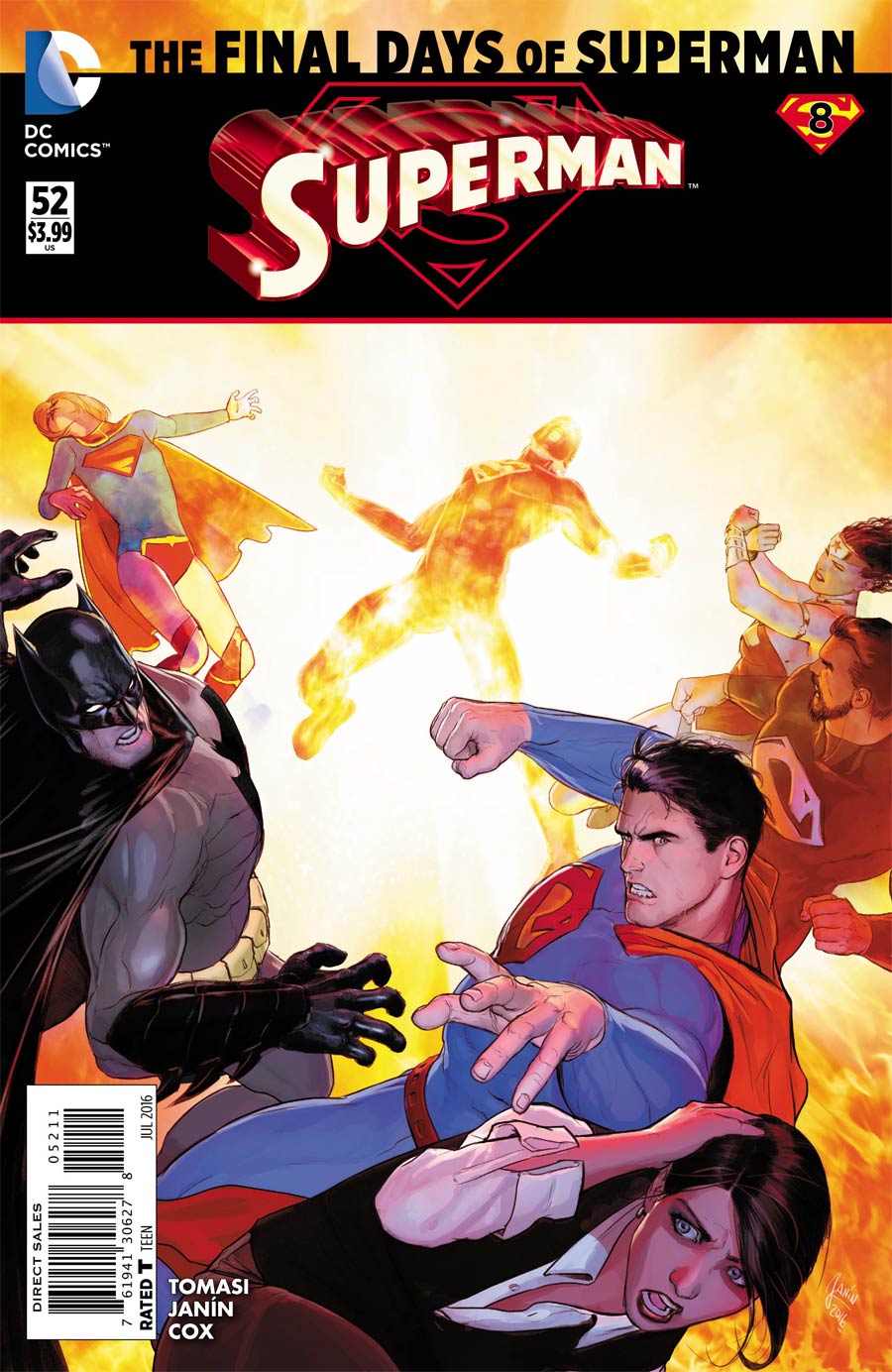 Click to enlarge
Superman and Denny Swan (the faux Superman) are fighting one another to the death.

Denny, refusing to accept that he isn't truly Superman but a composite of false memories and solar energy, is determined to fight off who he deems the imposter.

Superman tries his hardest to reach out to Denny and they smash and burn through acres of forestry trying to gain the upper hand over the other.

Kara arrives and though she manages to separate them she too faces and onslaught of energy and is hurled back with explosive force. This however proves advantageous for the other two thirds of the Trinity as Wonder Woman and Batman, aboard the Batplane, slam into Denny with such force that they temporarily bury him.

While Superman picks himself up he races to the aid of his unconscious and weakened cousin. Batman comments that Denny is rising in temperature and as before they all misjudge how powerful Denny is. He makes short work of Bruce and Diana after smashing out of the ground, but this time Superman is ready and he is the one that pulls Denny into the sky. The kryptonite poisoning reaches a peak just as Superman does but with barely any strength left they begin to fall out of the sky... until Clark White arrives to give them a boost and send them further into deep space.

Superman thanks Clark for the boost but sucker punches his rescuer telling him to pick up his mantle as he has a plan to end this once and for all. Clark crash lands and as Denny and Superman duke it out once more they both unleash heat vision. The plan is for Denny to use so much energy he burns out and unleash a solar flare to absorb the power and hopefully Denny in the process. The explosion is intense and lights up the sky and as the light fades and Superman falls, Diana and Kara soar to catch him, they don't get there in time but Clark White does and steadies him till Bruce and Diana take over.

It is obvious that Superman is fading fast, Lana, Lois, John Henry, Kara and Bruce all take their turns to say their goodbyes and comfort their friend.

Lastly Diana and Superman share a tender goodbye and as the tears stream, the Man of Steel literally burns out into a pile of ash.

Bruce wastes no time in trying to discover who Clark White is but he makes a quick exit.

As the news breaks that Superman has died, the world reacts in different ways to mourn their hero.

Lois meanwhile keeps her promise and writes the biography of her fallen friend, ready for the world to learn that despite his arduous and misery filled journey, he was a hero till the end...

Story - 5: Unexpectedly the story isn't tied up in a neat bow but it is one hell of a finale and the best kind.

A series that ends with a yearning for more and unanswered questions is the greatest way to end this Superman's adventures.

The cameos were all welcome though rushed and not fleshed, they did provide for a thoroughly enjoyable twist to the plot and Clark White soaring in was brilliantly played out. I love that he is a mysterious stranger to these heroes but despite that he is readily embraced into the story.

Is it a heart wrenching end? Partly.

This Superman just never got to catch a break. He never had the public like him with open arms, in fact he spent more time with people hating, despising or fearing him.

In that respect it was sad because he only became a true Superman at the end. True he killed Denny in the process but the passing of the torch moment, the goodbyes, the emotion... it was deep, meaningful and makes you yearn for the next issue.

It doesn't quite have the gravitas of say... "Whatever Happened to the Man of Tomorrow", or Superman #75 but the ramifications will definitely be felt for a long time afterwards.

Art - 5: The issue Janin drew Superman stating he is dying? That was beyond awesome and you might ask how he could top it, especially Sepulveda added into the mix... somehow he does it. There are some panels if art I will honestly remember forever and for a fan, or a journalist, to state as such it means you truly have done an outstanding job.

Cover Art - 4: An action shot that is brilliant but makes Denny the focus and throws Superman into the mix as part of an ensemble cast. As a farewell cover I find it a little off, still stunning but almost like it was a panel from the interior blown up rather than a cover.

Variant Cover Art - 5: THIS is a Superman cover to be proud of. It's a stunning piece of work and a fitting tribute to the original image by George Perez and as a goodbye to Superman.