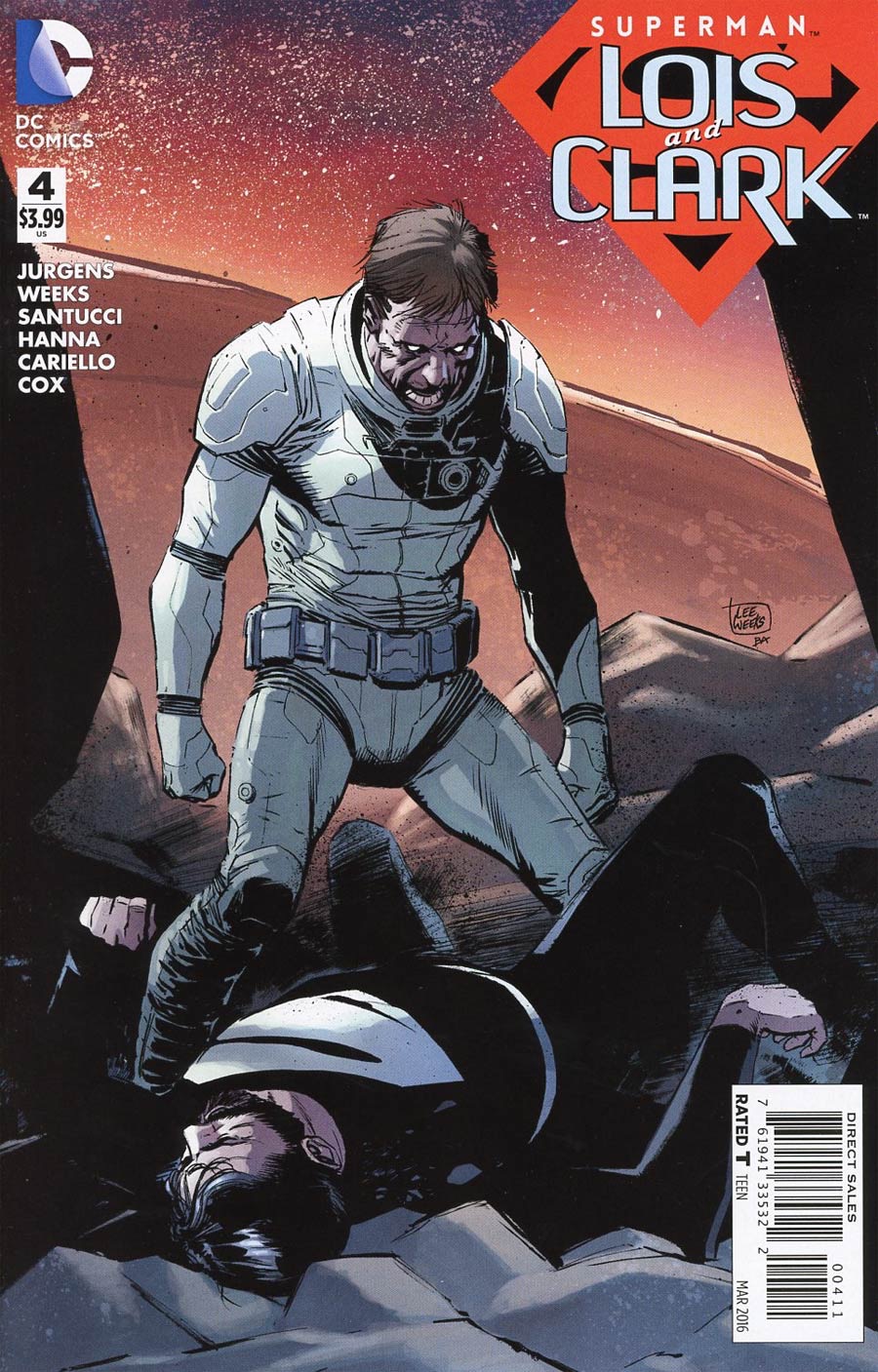 Click to enlarge
An opening flashback shows Lois and Clark visiting Metropolis. They carefully avoid places and people they know, and nearly bump into Jimmy Olsen. On return to their hotel, Lois presents Clark with a new outfit, as his normal clothes were not withstanding his adventures. The story returns to the present, where Lois accidentally reveals herself to Bruno Manheim, after checking to be certain Cora is safe. Elsewhere, Superman contends with Blanque, but his efforts are futile. Blanque buries Superman in an avalanche, after threatening to kill Lois and Jon. Farther away, the search for the Oblivion Stone has led to Jupiter, with its pursuer's eyes being now led to Earth.

Story - 4: It's a shame this series will only be another four issues, as it's turning in such quality storytelling amidst the dearth of offerings for Superman line-wide. This issue did demand more pardons than previous ones, and thankfully the knots didn't interfere with the entertainment derived within. Superman: Lois and Clark, as stated in the first review, has a premise that is wholly and conceptually implausible. Superman, Lois, and his son, are on another Earth that mirrors their own. They have remained undetected for nearly a decade. Superman has not been involved with public rescues, so one has to wonder what became of him during events such as Trinity War and Forever Evil. He has a new outfit comprised of a "polymer," because that's the jargon for superhero suits, and Lois somehow had it made with no one the wiser, as she impersonated her younger self. It's all a pretty big leap for a Superman reader, and thankfully it's worth the jump because of Jurgens' and Weeks' craftsmanship.

The humor of Jon asking Lois the most basic and obvious questions, must be a bit of turnabout for her, as he relentlessly challenges the supposed notions that are given him. Jon has shown himself to be, up to this point, his mother's son; inquisitive and curious, seeking to know more with an almost prescient knowledge that there is more to know. It's QED of the forward movement that Superman stories are capable of, with the freedom given to allow that growth and maturity to the characters. Marriage and children are seen as the death knell for characters for all the wrong reasons, which is mainly because it's been done for all the wrong reasons. Once the giant-sized issue is printed, and the hullabaloo over the nuptials is over, the story must go on, and few writers thrive in the middle, especially in comics, where Alpha and Omega stories are the time-honored works. Jurgens shows there's great depth to that middle many avoid, as we know that regardless of his power-level, a mere mountain will never keep Superman from his own.

Two things have niggled at my mind regarding Superman: Lois and Clark, Superman's power level, and the inability to sell this book past a semblance of life. Superman is on Earth and if his powers have lessened, why not simply charge up within the sun for a period of time? He's able to recreated a lesser version of the Fortress of Solitude, displaying an intelligence and genius many would think him incapable of, yet he hasn't run any tests upon himself to suss out what's wrong. Instead, he resolves to work harder. I'd rather see Superman work smarter, as opposed to harder. Superman being tossed around aimlessly forces me to relive the childhood trauma of watching Superman: The Animated Series, where the regular theme seemed to be to show how much of a beating Superman could subject himself to. When I saw the sales figures for the series, I inquired as to why the book has dropped from a peer of the other books, to back of the pack. My findings would be held suspect, and I'm fan of a certain poseur who shall remain nameless, but suffice to say it's a telling time in Superman history when you cannot have readers trust that the Superman you're selling is actually Superman.

Art - 4: The opening sequence in Metropolis is very well done. We get a sense of how much less the New 52 Metropolis is in a few panels, and Jimmy Olsen on the make is almost charming.

Cover Art - 3: Creepy, eerie, and not inviting at all.