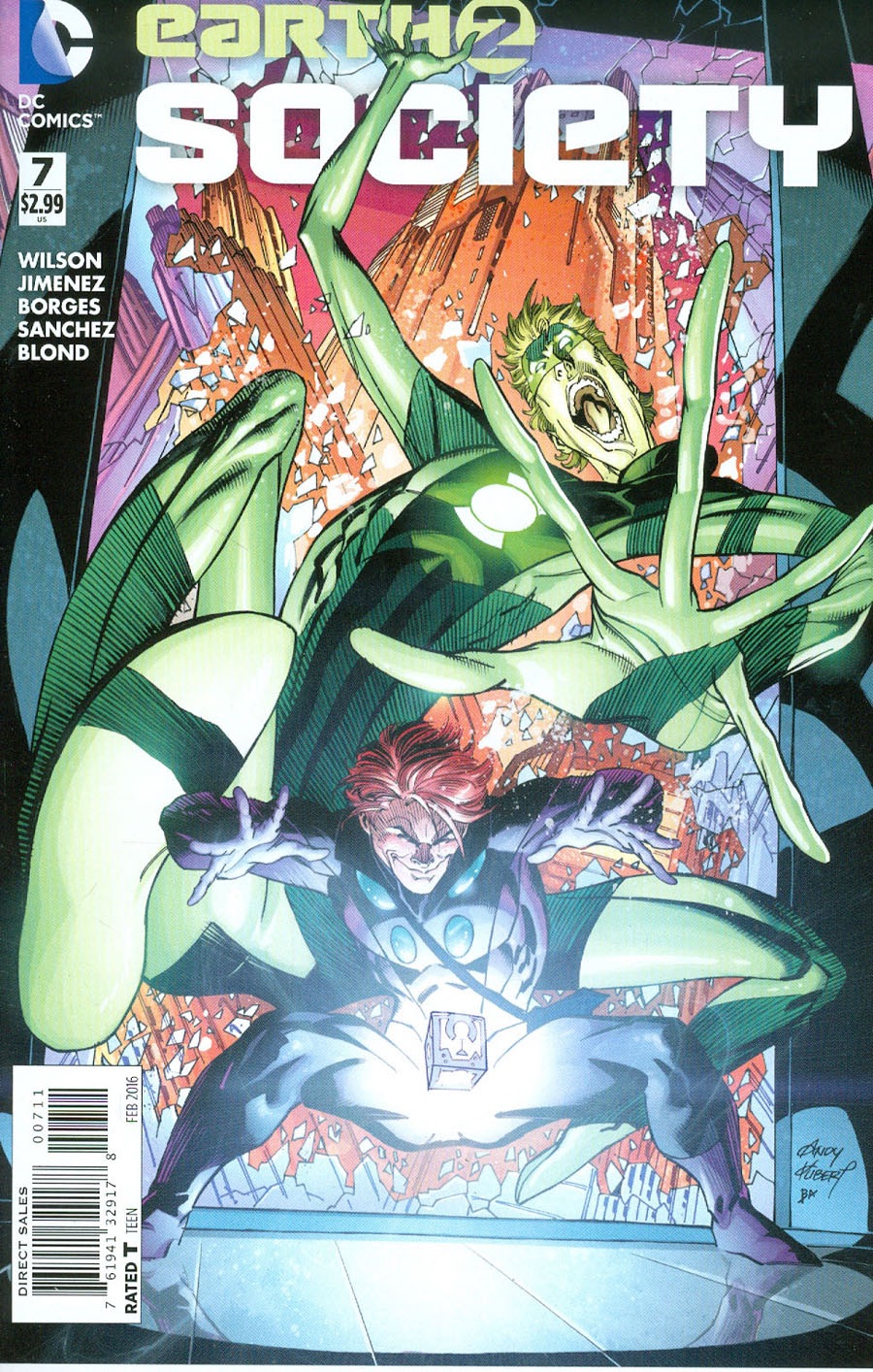 Click to enlarge
It's a race against time to stop Doctor Impossible. Many of Earth 2's heroes have banded together as Jimmy Olsen has double-crossed Red Arrow and the Huntress. He actually is using the Source Vault to create a Mother Box circuit. A clash of titans rages on as the boy who would be a god battles Green Lantern. The conflict does not go well for Alan Scott. Will he lose his life to an insane youth who may be too powerful for just one world, or will Batman and his allies find a way to save their new home and Green Lantern from utter extermination?

While the Flash's diversion did nothing to stop Doctor Impossible, Superman and Power Girl manage to grab him while Red Arrow shoots at the Source Vault. Both actions help to free Green Lantern, who uses his powers to imprison Jimmy Olsen like an insect in amber. The civilian population of New Earth 2 thank Superman, Batman and everyone who rescued their world from the mad youth. It is at this moment Alan Scott makes the following statement to his comrades:

"As individuals, you stand alone. But together you will bring justice to this new society."

Story - 4: Finally, the first story arc in this series is over. It went on a few issues too long for my taste. Still, this book has potential in spite of its flaws, and I look forward to reading it every month. Normally, I would have given up after the third issue. Yet, there's something about it that keeps me along for the ride. It may be slow at times. However, my curiosity is always piqued making me wonder what will happen next. The overall conclusion to Daniel H. Wilson's serial is fast paced. Plus, it makes up for everything that went wrong in the chapters before this one. Granted, the saga was possibly lengthened for the trade or hardcover, but I still enjoyed the seventh part immensely. Let's hope Dan Abnett will bring his usual quality to New Earth 2 and its heroes and villains when the new tales begins next month.

Art - 5: The art is still incredible in this series. DC better watch out for both Jorge Jimenez and Alisson Borges. They could be in line for some of the competitions biggest comic books.

Cover Art - 4: The cover actually merits a top score, but something I can't put my finger on looks off about it. The image a nice one, but I expected something slightly better from Andy Kubert.