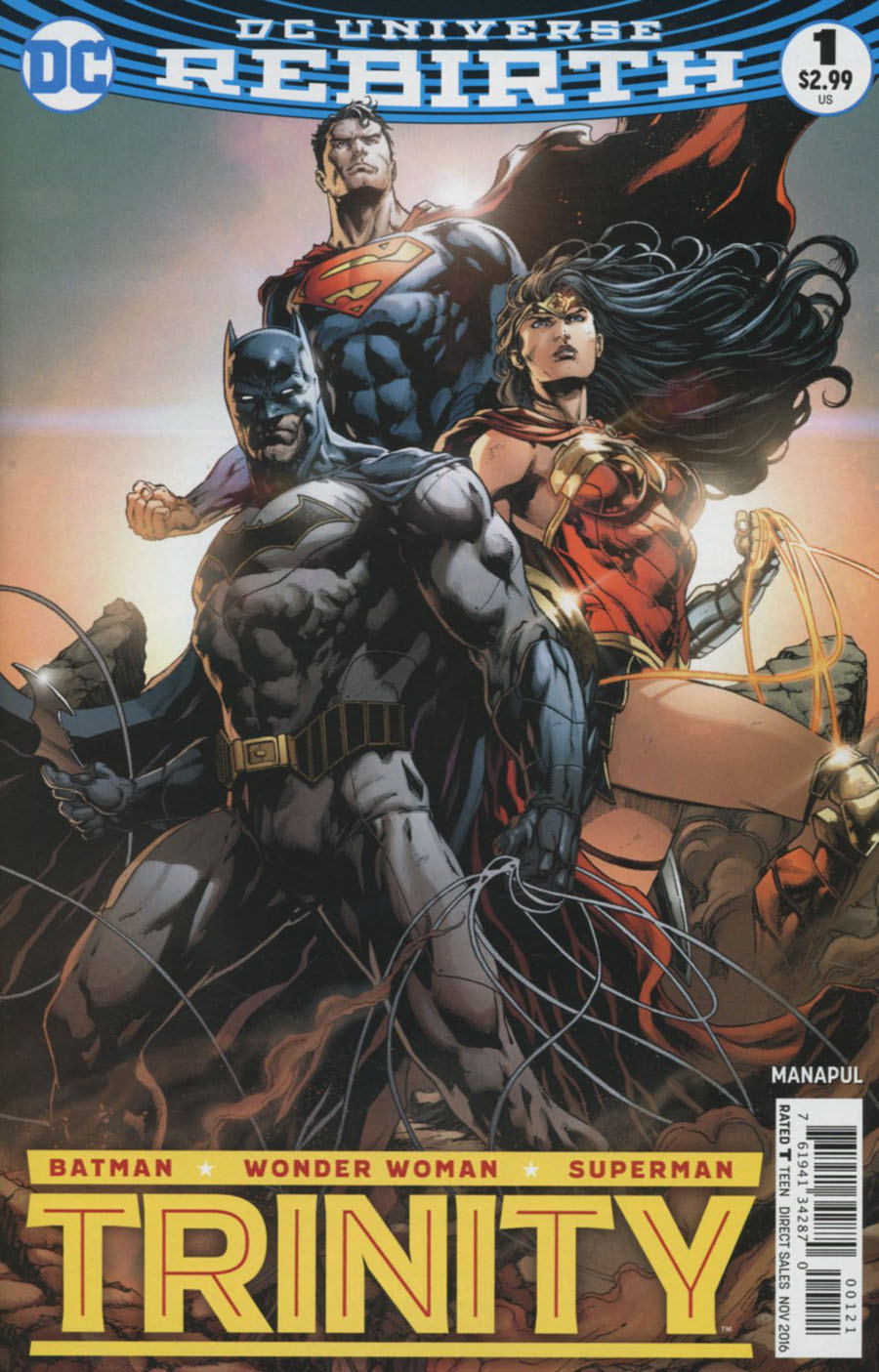 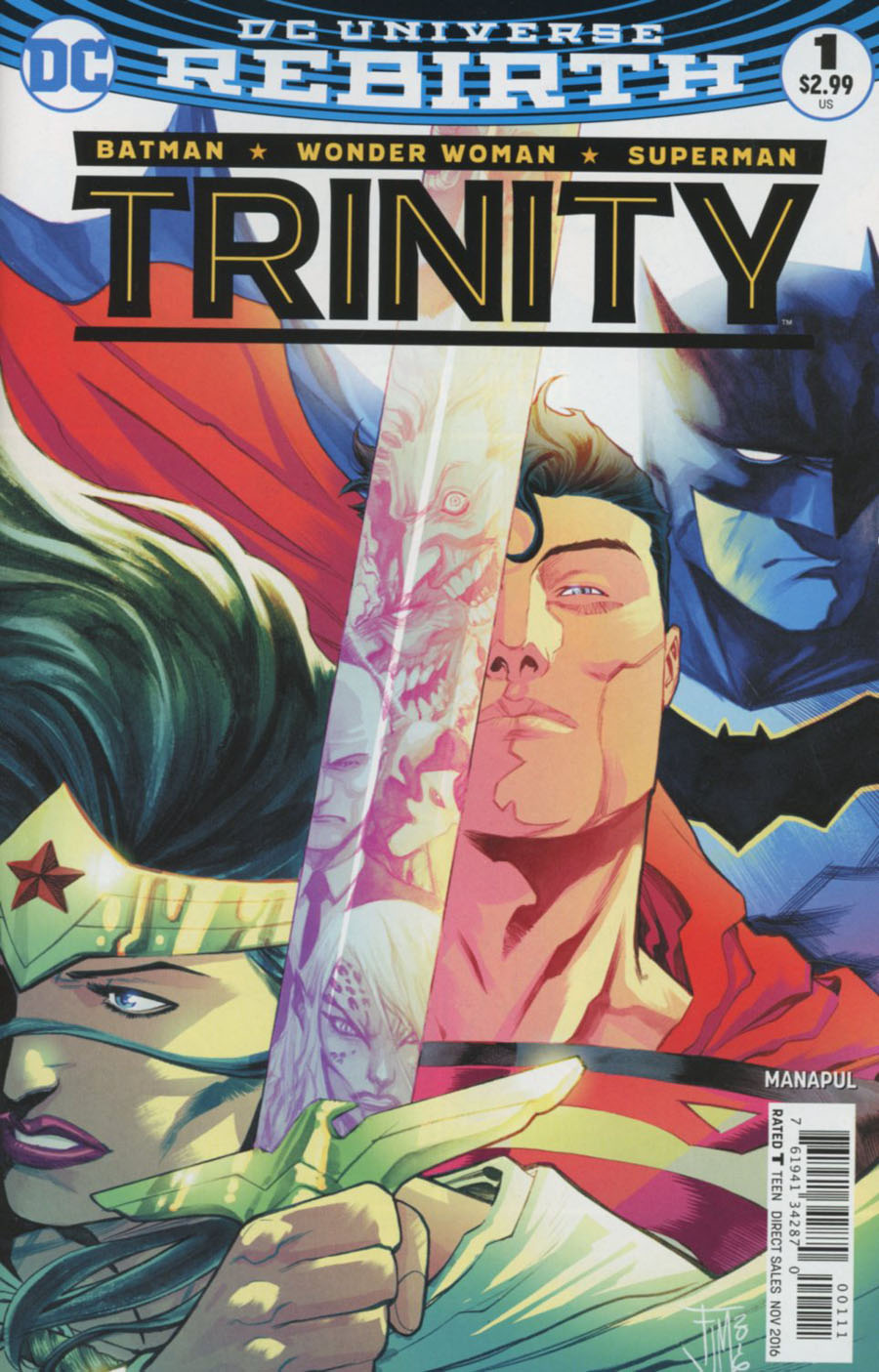 Wonder Woman hunts a boar and packs it into her invisible jet.

Diana radios Batman and warns him not to be late. Bruce assures the Amazonian Princess that he will back her up on the mission as he leaps out of his own Bat-themed plane and lands in Hamilton County.

While his mother Lois is doing a little baking Jon hears the doorbell and sneaking a peak he is shocked to see the guests arriving for dinner are a disguised Batman and Wonder Woman, his surprise switches his x-ray vision to heat and it bursts through the front door.

Clark in the meantime, soaring over the ocean, tests out a secret passage that takes him fathoms below into a trench through the ground and up into the Smith Farm barn and a secret hatch. Instead of a peaceful greeting Clark meets Diana and Bruce fighting back against Jon's nervous blasts of energy.

Jon apologizes but though concerned at the outburst he is more puzzled by the cause. Lois steps out and explains she invited them. Clark is not impressed; this isn't the Bruce or Diana he knew despite their appearance. Lois points out that if he is going to be Superman on this Earth then he must rebuild that bond he once had with the two people who would always have Superman's back. This was something that was destined to happen and they'd all been putting it off.

Bruce is his grumpy self while Diana is optimistic. When Bruce tries to intimidate Jon, Clark reveals a story of his Earth's Batman fighting alongside Robin. He doesn't agree with bringing children into crime fighting but Dick Grayson had once revealed Bruce was so protective that he once wore a rainbow batsuit to distract criminals when Robin was injured.

Bruce then goes on to say that he and Superman 'past' grew to be friends, to have a bond, though Clark has the same face, they share no such bond.

While the reluctant men dish up dessert, Diana and Lois face the elephant in the room - the fact they both love Clark Kent. Diana reassures Lois that she isn't out to rekindle romance, this Clark is not the one she mourned. They have no feelings of that nature. In fact, with the loss of her friendship with Barbara Minerva, Lois is now more important to Diana to have as a friend.

As the night goes on Bruce and Clark realize they are more like brothers... and similarly Lois and Diana realize they are like true sisters. As Lois reenters the house the Trinity look out at the fields of Hamilton County. Clark confides in Diana and Bruce that he is glad to be Superman once more and that they have forged a friendship that seems like it was destined to be.

The bonding is cut short as Clark hears a voice from the barn that sends a chill through him.

Through a pane of glass Clark, Bruce and Diana see a vision of the past as if it is happening right now. A living Jonathan Kent and a young Clark looking back at them!

Story - 5: Francis Manapul is right, this is a long time coming. The last time the Trinity worked together aside from the recent movie was the 52 part maxi series. This time of course with the events of the New 52, Convergence and Rebirth coming to a head it really was a matter of time before things were realigned.

I'm glad it took only one issue. I was a little nervous we'd have to deal with a Lois/Clark/Diana love triangle and a continually miserable Batman.

Reforging friendships was really the only solution and though it puts the final nail into New 52 Superman's coffin it is a welcome solution to making the Trinity a functioning, trustful team once more.

As this issue was slow paced and dealing more with drama and setting the stage there is some way to go for the book to prove they work as friends as well as heroes... but... it's a promising start and eradicates any memory of the old Trinity series and gives hope for an intriguing, fun and potential powerhouse of a book.

Art - 5: When a writer or artist takes on both roles, it's like a director acting in their own movie. There is always a danger it becomes a self indulgent mess of a project and let's be honest we've all seen comics that should be labors of love but turned into a mess. Thankfully Francis Manapul proves he is every bit as dedicated and talented as a writer as he is an artist.

Long time readers of the Superman Homepage know I don't mince my words and I also give credit fairly when I feel it's due.

There isn't much in the way of action but some of the spreads really utilize the cast to super levels.

The book has heart.

Cover Art - 5: I love the cover and the triptych of color palettes.

I love a cover that feels like a movie poster.

When I saw this I really wanted to pick it up. They look like Super Friends, they look like legends... I don't think there are another trio of heroes that can evoke that kind of response.

Variant Cover Art - 4: Whether fans like it or not, Superman is the glue that holds this Trinity together. I really like the art but feel they should share the space not push Superman into the background.