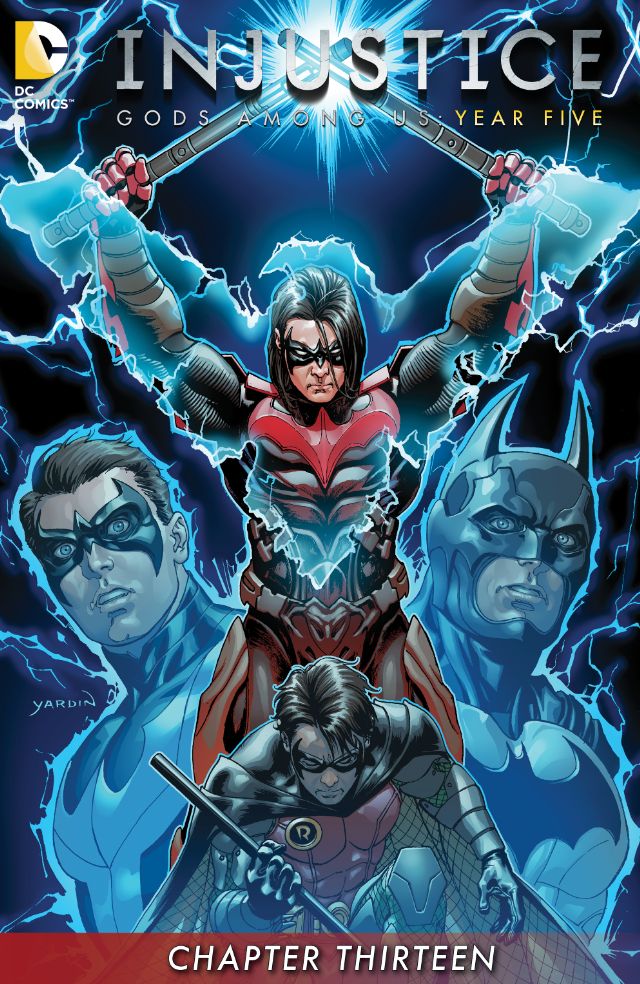 Click to enlarge
Nightwing (Damian Wayne) visits Alfred, who is still tending to the Batcave. They debate on the success of the Regime and the Insurgency, with Alfred affirming that Batman will win. Catwoman and Harley Quinn pull a heist, but Nightwing intercedes to stop them. However, Nightwing allows Catwoman to distract him, giving both her and Harley Quinn the chance to escape.

Story - 0: "Clark's entire life has been governed by fear. As powerful as he is... he will always be afraid." These words spoken by Alfred took a serrated edge to Injustice that has been the cornerstone on my consternation with it. The premise of this story isn't some grand scheme to show superheroes in a pseudo or hyper-realistic fight. No, Injustice is based on one foundation, and that is a fight between Superman and Batman, a fight that has made sense, begrudgingly, once and once only, and has worn out its use to the point a major motion picture is now being made about it. Alfred's line is a flat out lie, as he describes Regime Superman, but not the character we were shown to have existed before him. That character was Superman, in love with his wife, Lois Lane, and looking forward to the birth of their child. Fear sets in after their murder, but as Year Two demonstrated, it is Regime's ability to generate great fear instead of hope that is the change in his character. A man governed by fear, is not and will never be Superman.

Alfred's words ring even more hollow, when you recall that Batman fails at every turn to stop Regime Superman, and it is Superman, from a parallel universe, that must finally dispatch him. That sort of "victory" is the equivalent of The Dark Knight Returns: a thumb in the eye and then run like hell. It's taken Alfred's line to return the faint promise of some entertainment back to the bin, as Injustice has never been more than a trifle to be hyper-invested in and then forgotten. If you've read this long, why not go the distance and see how things play out... or just watch the cut-scenes on Youtube for free and save yourself the money. It's not amazing that readers pay for the same story over and over, as there are only so many fundamental stories to begin with. No, it's the willingness to give over credence in the form of cash for something that just is not good. Thanks Alfred, for a moment, the Kool-Aid looked like merlot. Never again.

Art - 4: Damian channels Daredevil in his match-up with Catwoman, complete with a billy-club throw... and it works.