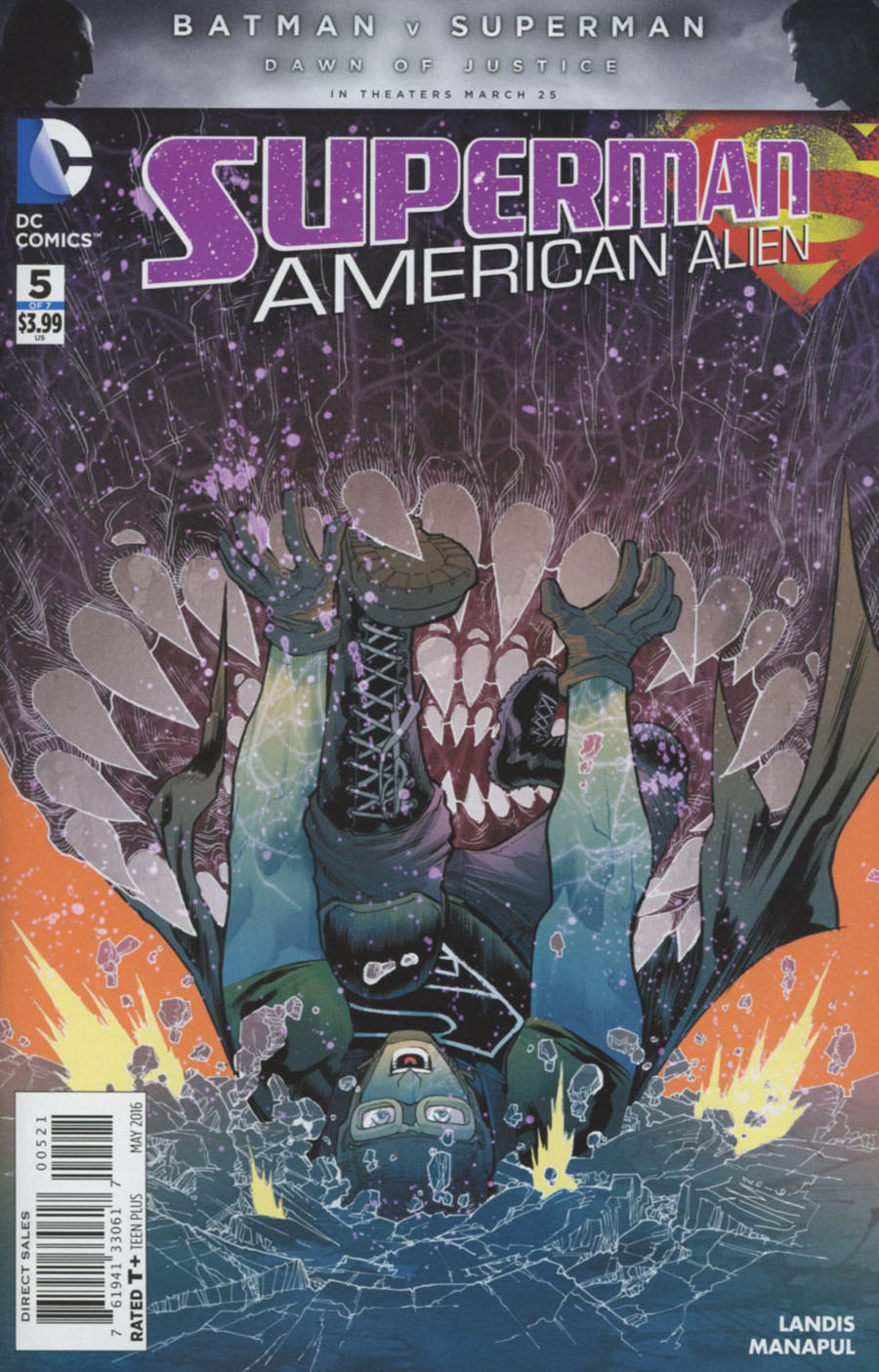 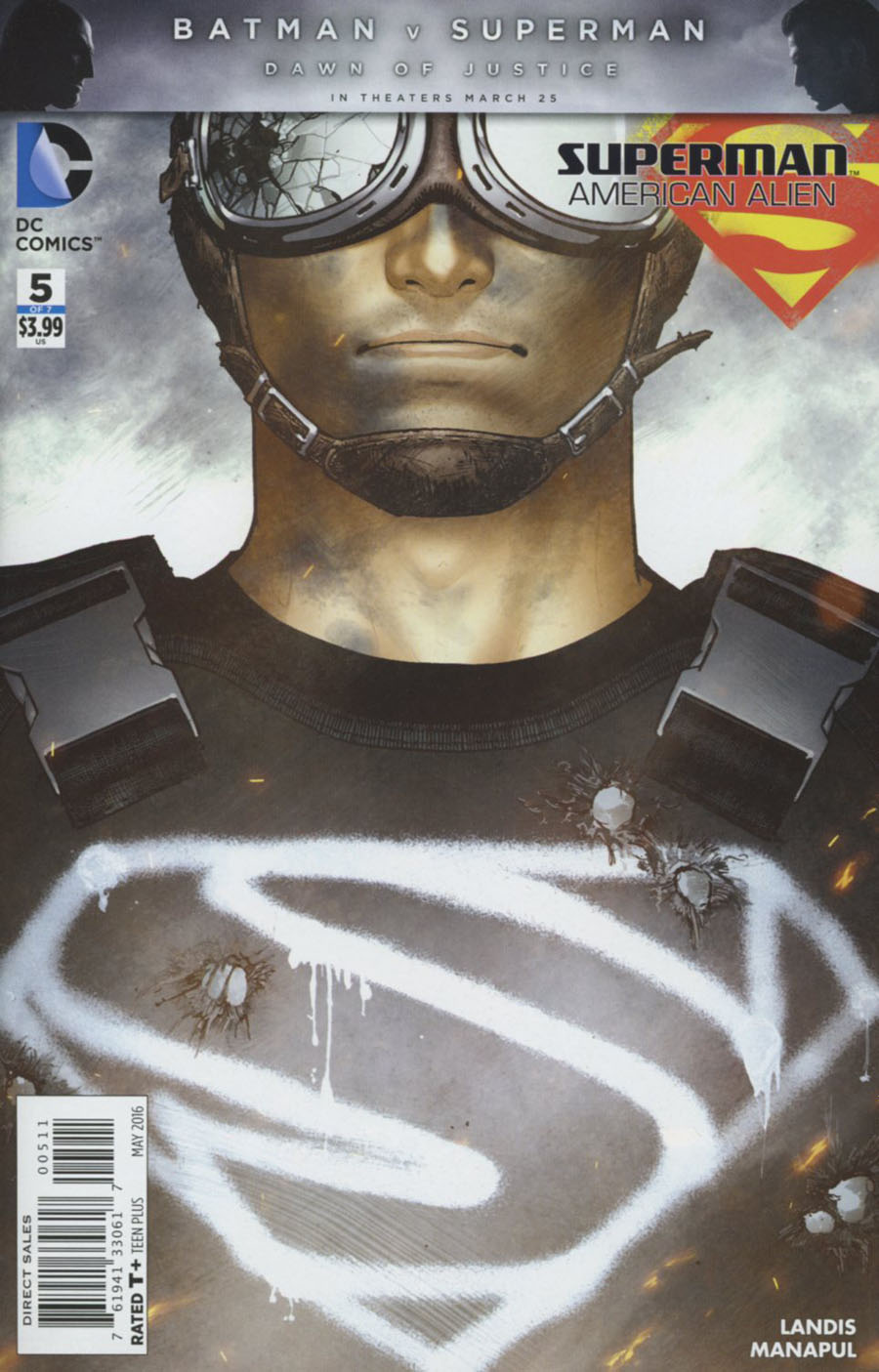 Click to enlarge
Clark is still trying to figure out the best way to use his powers to help people. His current course of action is to do one good deed a day dressed in goggles and Batman's cape. Things go south when he confronts a monster that is able to suck the energy right out of the walls. After a quick battle Clark defeats the monster and is told by the creature that Lex Luthor was responsible. Clark confronts Luthor but is easily over powered intellectually by the billionaire. This leaves Clark in a funk and he begins to question his actions but after a talk with Lois he embraces the name Luthor gave him...Superman.

Story - 3: Max Landis began his rather infamous video about the Death of Superman by telling the audience that none of us cared about Superman. Even if we thought we did...well, we didn't. Turn about being fair play I am going to kick off this review by saying that Max Landis doesn't understand Superman. He thinks he does. This whole mini-series is a giant exercise into him trying to convince us that he has this fantastic take on Superman and that we're really getting into the head of Clark and seeing why he becomes the greatest hero ever.

There are two problems with this with the first being that examining Clark's early days is old hat at this point. Never mind the 10 years of Smallville that led to that Clark becoming Superman. Since 2004 we've had Birthright, Secret Origin, Earth One, the New 52 and the film MAN OF STEEL. Seeing Clark becoming Superman is commonplace. It's almost like the people in charge of telling Superman stories have no idea what to do with the character so they keep revisiting the origin in the hopes of cracking the code. For the most part they don't stick the landing and that leads to a series of stories where Superman wanders around trying to figure out his place in the world again and again and again to seriously diminishing returns. For example...

New Krypton: Superman reconnects with his homeworld and finds that not only are there bad eggs on the Kryptonian end but that there are a bunch of humans that hate and fear him because someone in editorial forgot that this was a Superman story and not one about the X-Men.

Grounded: Superman walks around America trying to reconnect with humanity forgetting all about the fact that he has a civilian identity that not only interacts with other humans everyday but writes about them for a living.

Truth: Clark Kent's identity is revealed and he does...stuff. There are motorcycles and shadow demons and Vandal Savage involved. A lot of sound and fury signifying nothing.

Now we have Max Landis trying his hand at this and he just doesn't get it.

Look at the proto-Superman we are treated to in this issue. Clark is hearing a leather cap, aviator's goggles, a bullet proof vest and Batman's cape. What the serious heck is that all about? Superman was inspired by Batman on some level? No. No, no no. Wrong. Bad. No. I am sick to death of this attitude that all a good Superman story needs is a little Batman. It was wrongheaded in SUPERMAN UNCHAINED. It is completely wrong here.

Then there's the first confrontation with Lex Luthor where Landis falls into what I call the Mark Millar trap where he makes his villain so incredibly smart that Clark can't help but look incredibly stupid. To be fair Millar isn't the only one that does this and to be fair Millar isn't the only one to do this with Lex Luthor. The confrontation in this issue reminds of the one at the end of Tom De Haven's novel IT'S SUPERMAN where Lex repeatedly calls Superman stupid. This doesn't prove what a dangerous foe Lex is. This doesn't even prove how brilliant he is. It's a writer trying to prove how clever he is by churning out seemingly clever dialogue. And it just makes Clark look bad. I'm sure Landis thinks that Clark wins in the end with his fun bit of graphitti but it really doesn't. It tries to but fails on every level.

Now you could argue that Landis isn't writing an official version of Superman's origin. This is just an exercise. An exploration even. It's just a writer looking at Superman and trying to figure out what makes him tick. So in the end it really doesn't matter.

The thing is it does matter or why do it in the first place? It matters because instead of doing it right Landis is flailing around like just about every other writer has done since 2000 when it comes to Superman. The thing that drives me nuts is that Superman is not a complicated character. He does the right thing because it's the right thing to do because that's what he was raised to believe. He has these abilities and he wants to help people due to the guidance of Martha and Jonathan but I guess that's not edgy or modern enough so Landis, like so many others, muddies the waters and tries to make Superman more like a Marvel character.

I'm not suggesting that the idea of telling the story of how Clark actually goes about becoming Superman isn't worth telling. I think the definitive modern revamp of Superman is ready to be told but you have to have a writer that wants to deal with Superman on Superman's terms, not the writers'. Landis claims to love this character but at every turn he displays a serious lack of understanding at who Clark is deep down. He keeps trying to graft these foibles and insecurities because the idea of a purely altruistic hero eludes him, which says more about Max Landis than it does about Superman. It may seem like I am picking on Landis here but I'd level the same charge at writers like David Goyer and Scott Synder as well.

The sad thing is that the idea of a hero having a clear and defined purpose has been successful in the modern era. Look no further than the Marvel Cinematic version of Captain America. Steve Rogers is a character aching to do good and is willing to make the hard decisions for the greater good. That's the Superman I want to read about. Not this indecisive wanna-be that needs Batman to show him that wearing a cape is cool.

There's two more issues in this series. I am not holding out any hope that Landis is going to pull out of this dive. I could be wrong but I really don't think I am.

Art - 5: I've admired Francis Manapul's art for years and he does the best he can with the material he's given. One of the thing about Manapul's art I like the most is his ability to portray super human feats in an exciting and fresh way. The splash on pages two and three is amazing. The quieter pages with Clark and Lois are equally amazing. His work hits me right in the feels and I'm glad it was here because it made getting through the issue a whole lot easier.

Cover Art - 4: I may hate this prototype costume but Ryan Sook makes it look good. The details of the shattered lens on the goggles and the tears in the bullet proof vest make for an exciting image.

Variant Cover Art - 4: Another great variant cover. I love the detail Manapul puts into Clark's boots and this is a very dynamic image.