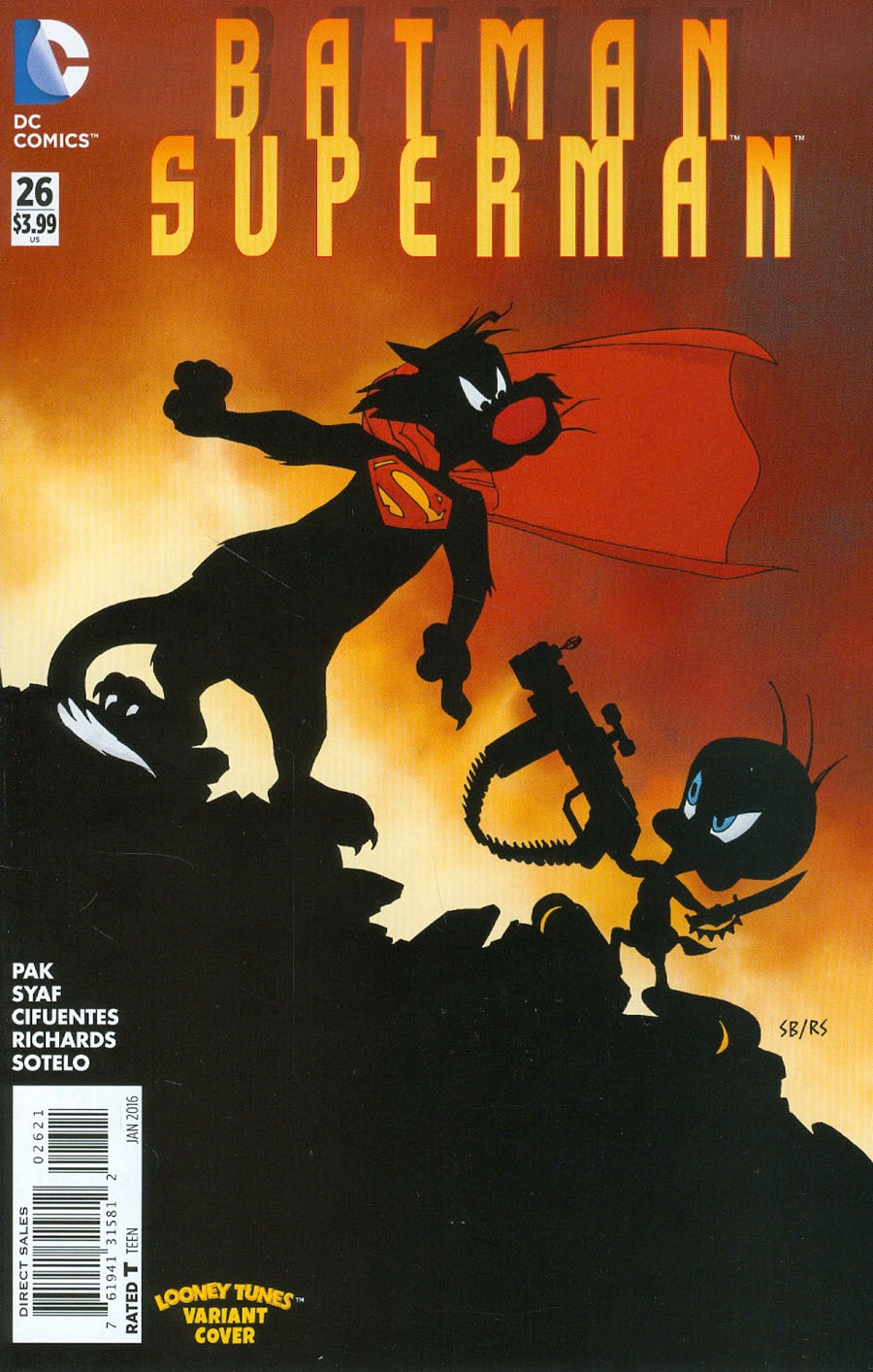 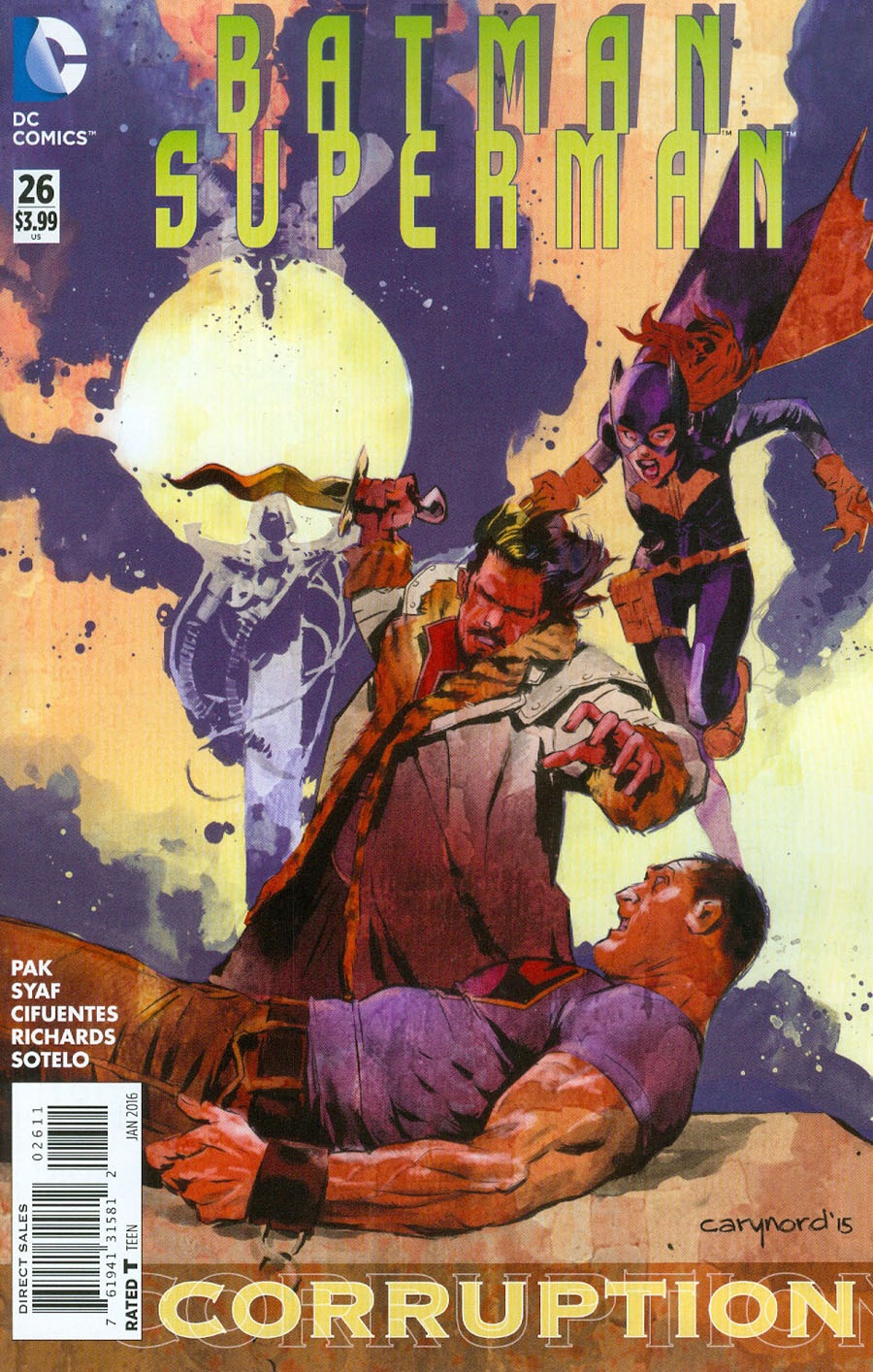 Click to enlarge
Vandal Savage has enslaved a group of Siberians to unearth some decommissioned nuclear weapons. In desperation, the slaves work quickly to carry out Savage's orders. Enter Superman and the Bat Family to save the day.

However, the Siberians are a little disappointed when they realize that Superman isn't... well... so super anymore. But all is not lost. Superman does have some powers, and the Bat Family members have skills. Skills that will hopefully stop Savage.

Barbara Gordon uses her tech skills to investigate Savage's teleportation device. Dick Grayson uses his spy skills to begin the process of giving the Siberian new identities, so that they can 'disappear' and not be found by Savage. Red Hood takes charge of arming the Siberian camp.

As happens when alpha-superheroes get together, arguments ensue about how best to defeat Savage. Ideas range from transporting Savage to Hawaii to nuking him.

Certainly there is some grey area somewhere.

Before a decisive answer to the problem can be found, Shadow Monsters pop out of the snow and attack the heroes. There's a fierce battle that ends when BatGordon shows up in a giant Bat-flying-saucer thingy.

After the battle is won, Superman confesses that it was he who called in Batman. Superman apparently had called on Batman to investigate the reasons why Savage was taking so much interest in nuclear bombs in Siberia. Gordon's sleuthing literally uncovers the hiding place of the stolen 'sun' and some sort of Nazi war machine.

Story - 4: The Good: The Siberians are in real trouble. The tension feels real as the father of the threatened child pushes the workers to work harder and harder towards Savage's goal. Even when the heroes show up, the father is still scared for his family. Only when Superman saves his family in a spectacular way does the Siberian father begin to have hope.

Superman inspires hope. I love that.

Humor. There is actual humor in this issue. Red Hood provides it by constantly reminding Superman about his Savage ass-whoopin'.

Superman may be down as far as his powers are concerned, but his natural leadership abilities come through. He knows his counterparts' strengths, and he immediately puts them to good use.

Superman and kids. It's always a pairing I like. The kid ends up being a little creepy, but I like that Superman distracts him as Dick talks to the mother about changing their identities. Superman is sort of sacrificing his own comfort to make this kid feel safe.

The Bad: When Batman shows up. It sort of pissed me off. And when we find out that it was Clark who called Bats, I was like, "Why? He hates you. Why would you do that?"

Also, the convoluted detective work that leads to Batman blasting away a bunch of snow to reveal the Nazi war machine. The reasoning that lead to that revelation made me feel like I was watching an old episode of the 1960's Batman. It was kinda silly.

The Eskimo kid stabbing Superman with a fork - over and over again. All I could think was, "Why is his mother letting him act so bratty?"

Why is Batgirl not cold? Even Superman is wearing a coat. How in the world is she keeping warm?

Conclusion: This issue lives up to its title. Teamwork.

Art - 5: The inside art is great. From the time Superman and the Bat Family are shadowed to the ending scene where the Nazi tank is revealed, the art is rich, colorful and pushing the story forward. Expressions are important to me, and with each panel you know what each character is thinking/feeling.

Cover Art - 2: Cover art has almost nothing to do with what is inside the comic. That always ticks me off. Vandal Savage is discussed inside the comic, but he never appears.