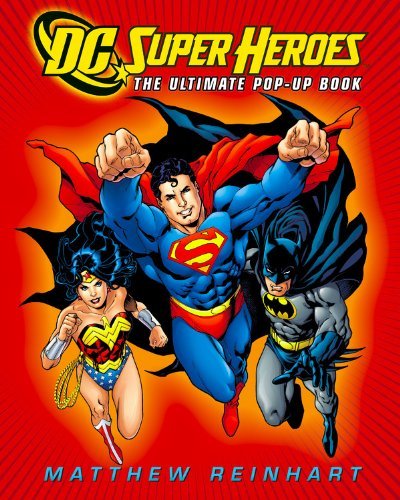 Click to enlarge
In a world where Pop-Up books have been relegated to childish fare and silly storytelling, "DC Super Heroes: The Ultimate Pop-Up Book" stands out among the best for adult fans of the DC Universe.

The book costs US$29.99 and as soon as it's opened, it's obvious that it would fall apart in the hands of a child. The paper quality is low, but the production value is high. There are a number of special features like a bat signal that lights up and Wonder Woman's twirling lasso.

Every page has a series of secondary pop-ups on the sides, some of which contain 2 or even 3 extra mini pop-ups.

Superman pops out against a flat backdrop of Metropolis. Once the page is laid flat, Superman looks great from a top-down angle. The written information tells about Clark Kent's work at the Daily Planet and marriage to Lois Lane. On the left side, there is a secondary Pop-Up of young baby Kal-El being rocketed from the exploding Krypton. To the right, there are two Pop-Ups concerning Lex Luthor and Superman's Death at the hands of Doomsday.

Much more detail went into Batman's page design. He seems to be leaping out of the image against a 3-D backdrop of Gotham with a Bat-Signal lighting up in the back. The two mini pop-ups to the left address the Batcave and Batmobile. The two to the right showcase Robin and Batgirl as allies, as well as The Joker as the villain.

Wonder Woman's main design was the least successful. Even with the page laid flat, her face and chest stand out much farther than necessary, and her long hair doesn't match up with the layout. Chances are it was a design flaw and the separate parts had to fit a certain way for the book to properly close. To the left, there is a bird's eye view of Paradise Island and a partially clear plastic invisible jet. To the right, a pop-up of Wonder Woman fighting Ares can be opened. Unfortunately, when the page is closed, Wonder Woman's lasso sticks out of the lower corner of the book and will probably be the first thing to break.

Pop-Up #4: The Green Lantern Corps (and other heroes)

All of Earth's Green Lanterns are shown against a 3-D power battery with two of the more popular alien GL's. From Earth, there is Kyle Rayner, Guy Gardner, Hal Jordan and John Stewart. The two aliens are Kilowog and Salaak. Just as with Batman, this pop-up proves that single character, massive pop-ups are not always successful. This one showcases several characters and came off quite well.

On the left, we have a pop-up of The Flash with side notes about Green Arrow, Black Canary and The Atom. To the right, there's a secondary pop-up of Aquaman riding a giant seahorse and a tertiary mini pop of Shazam, plus another pop-up of Hawkman and Hawkgirl with a note about The Martian Manhunter.

Pop-Up #5: Darkseid and His Parademons (and other antagonists)

As amazing as the final pop-up is (I'm almost there) this is the most intricate layout. The main pop-up is Darkseid with several Parademon's behind him. Since only Darkseid's top half appears in 3-D, it's far more successful than Wonder Woman or Superman's pages. The extra pop-ups make it even cooler.

On the left there are two secondary pop-ups. The first is of other major Batman villains like The Penguin, Catwoman, Bane, Two Face and The Riddler. The other is an excellent rendition of Brainiac's Skull Ship with a tertiary pop-up of Black Manta putting on his helmet as the mini page is opened.

To the right we have a 3-D picture of Hal Jordan next to Sinestro as a Green Lantern. Once opened, there is Sinestro in his old costume with the yellow ring, Hal Jordan as Parallax and the yellow Parallax construct in the background. Turn the page again and there's a wonderful image of The Anti-Monitor. With a closer look, tiny drawings of the heroes from Crisis on Infinite Earths can be seen.

This is my favorite page and it showcases every major character in the DC Universe from Superman and Batman to Chemo and Solomon Grundy. The image pops out to nearly 18 inches from the bottom of the page. Every character has a number and is listed in alphabetical order with their corresponding numbers on the outside of the secondary pop-up on the right side of the image, a total of 45 listed characters. Plus there are even more if you turn the book around. Even The Wonder Twins are here if you look hard enough, but they're not listed in the index.

Secondary pop-ups include the Justice League's first battle against Starro, The Teen Titans, and The Justice Society of America.

Some of the pages don't close easily and many of the secondary pop-ups take a little effort to properly open around the main images, but what it lacks in those qualities, it makes up for in the price tag.

Sure, DC could have made it perfect and put the book about US$150, but it would have suffered a severely limited release. What we get is a very fun and cool Pop-Up book with spiffy details.

Even though the book is great, keep it away from young kids. The pop-ups are delicate (another flaw the price tag makes up for), so handle with care.

But if you're a fan of Superman and/or the DC Universe, you really need to check this out.