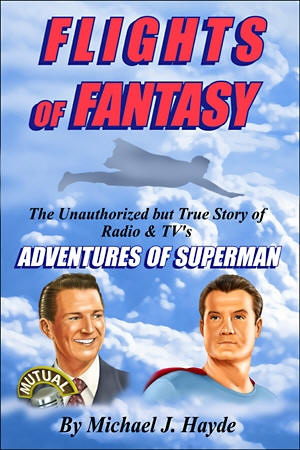 Flights of Fantasy: The Unauthorized but True Story of Radio & TV's Adventures of Superman

Click to enlarge
When anyone asks me who my favorite Superman actor is, my answer is generally Clayton "Bud" Collyer. This surprises most people as it's not what they expected. However the Superman Fleischer cartoons and radio series are two of my favorite versions of the Man of Steel, and Bud Collyer voices the character in both.

Because of my love of the Superman from this early era, I was looking forward to reading "Flights of Fantasy" by Michael J. Hayde. Having now done so, I can say that it is one of the best Superman reference books I've read... period. It is both excellently written and meticulously researched. It unveiled so many aspects of Superman's radio and early TV days that I had no idea about.

Books hold a special place in my heart. I have set aside a room in my house (known as "The Library") with wall to wall bookshelves filled with the books I've read (and plan to read). I hate seeing people dog-ear the corner of pages to mark their place rather than use a bookmark. In short I hate seeing books defaced. However for the first time in my life I found myself with a marker pen in hand, highlighting paragraphs in this book for future reference. Gems of knowledge that I felt were important to look back on later and hopefully incorporate into this website's pages on both the radio series and 1950s TV series.

The 1940s Superman radio series is in many ways shrouded in mystery. Many of the episodes have been lost to history and therefore cataloging the series is difficult and open to speculation. Michael J. Hayde has managed not only to unearth many details previously unknown, but has brought a clarity to this era that will undoubtably be referenced by historians for years to come.

Hayde breaks down the Superman radio series into 5 eras that not only makes complete sense, but seems so natural that I wondered why nobody had set things out this way before.

There's so much intriguing behind-the-scenes information on the production, financing, sponsorship, casting and writing of the radio series. The pages are dotted with photos and images of newspaper clippings from the time.

The chapters on the "Adventures of Superman" TV series are just as well written and researched. The insights into how the series was brought to television, the behind-the-scenes jostling for position and self-promotion. The obstacles of filming on a tight budget and the trials and tribulations of George Reeves' life off-screen as the star of the show make for riveting reading.

"Flights of Fantasy" is almost three books in one. The first third is dedicated to the Superman radio series. The second is all about the "Adventures of Superman" TV series starring George Reeves, and the final third is an index of episode listings including synopsis, script comparisons, trivia and bloopers. There are even two complete scripts from the TV series that were never filmed.

Without a doubt one of the finest Superman books I've read, "Flights of Fantasy" is a book I'll be returning to time and time again for information and research. But it's also an entertaining read. I'd happily give it a 10 out of 10 rating.