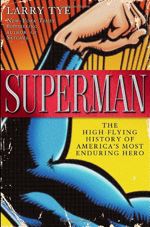 Superman: The High-Flying History of America's Most Enduring Hero

"Superman: The High-Flying History of America's Most Enduring Hero" by Larry Tye is undoubtably the best "History of Superman" book I've ever read... and I've read quite a few.

Meticulously researched, the book unveiled many details about behind-the-scenes events never before discussed in previous books, especially in regard to the early days in the late 1930s and early 1940s. Much of this is thanks to Larry having acquired Jerry Siegel's unpublished memoirs (Creation of a Superhero), as well as letters and correspondence shared between many of the players involved with Superman at the time (such as Siegel and Joe Shuster, Jack Liebowitz and Harry Donenfeld).

I was quite pleased to see the Superman Homepage amongst many of the sources Larry used in his research, with Joanne Siegel's personal article "The True Inspiration for Lois Lane", my "Superman and the Phone Booth" article, Wallace Harrington's "Superman and the War Years" article, and a few of our comic book reviews earning a mention.

Tye goes into so much detail on the early years of Superman, it takes up the first five chapters of his 11 chapter book. It's riveting reading. Tye really gives the reader an insight into those early days at DC Comics. He fleshes out the roles and relationships between Superman's creators and publishers in a way that I've never seen before. It was quite an eye-opener.

The book covers every era of Superman, as a 'History' book should, but Tye does so in a way that makes you appreciate what a trail blazer Superman really was. In each era Tye finds what was special and exciting about the Man of Steel, and explains how Superman really was ahead of his time in every facet of the character's growth and evolution.

Clayton "Bud" Collyer, Kirk Alyn, George Reeves, Bob Holiday, John Haymes Newton, Gerard Christopher, Christopher Reeve, Tom Welling, and Brandon Routh are all covered in equal measures. While I've read books before that cover the different eras, this is the first one I've read that includes them all in such great detail, including "Smallville" and "Superman Returns". He does touch briefly on "Man of Steel", but obviously that's a chapter that really hasn't been written yet.

The legal battle over the rights to Superman is covered in excellent detail, with Tye giving a fair and balanced overview of the situation. I have to say however that I was unaware just how much money had been paid to Jerry Siegel and Joe Shuster over the years... and to Joanne Siegel especially. It really gave me reason to pause and reassess where I stand on who is owed what in the whole copyright ownership debate.

Also included is a 16 page spread of photos, collected together at the center of the book. They include photographs of Jerry Siegel and Joe Shuster, Jack Liebowitz, Kirk Alyn, the Fleischer Superman, George Reeves, Noel Neill, Jack Larson, a number of comic book covers, the Super Friends cartoon characters, Richard Donner, Dean Cain and Teri Hatcher, Tom Welling, and Michael Rosenbaum, amongst others.

All in all, "Superman: The High-Flying History of America's Most Enduring Hero" by Larry Tye is a book all Superman fans MUST read. There's no two ways about it. You won't be disappointed.

Order "Superman: The High-Flying History of America's Most Enduring Hero" by Larry Tye from our Online Store.