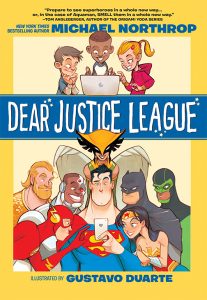 While the story is broken up into chapters that focus on one Justice League character at a time, the entire book has a connecting theme that makes it all the more enjoyable.

"Dear Justice League" finds our heroes answering emails, text messages, and written letters from young fans, who have interesting questions of each member of the Justice League. These questions and concerns are all dealt with while Superman, Hawkgirl, Aquaman, Wonder Woman, The Flash, Green Lantern, Cyborg and Batman are also trying to handle the problem of an infestation of Insectoids.

As a graphic novel aimed at younger readers, "Dear Justice League" is humorous, action-packed and entertaining from cover to cover. The artwork is a joy, with so much fun imagery that I found myself staring at each page, looking at all the smaller details that add to the experience.

The idea of Superman, Wonder Woman, Batman and the rest of the League taking time out of their day to answer fan mail is interesting and fun on its own, but the way Northrop weaves the story through these interactions was an added bonus. It was a welcome surprise.

I was happy, when reaching the end of the graphic novel, to see that there's a sequel involving the super-villains. I look forward to seeing what kind of fan mail Lex Luthor, The Joker and the rest of the Legion of Doom receive.

Rating - 5 (out of 5): "Dear Justice League" was a cute idea when I first heard about, now, having read it, it has become a book I would highly recommend to DC fans of all ages.