100 Things Superman Fans Should Know & Do Before They Die 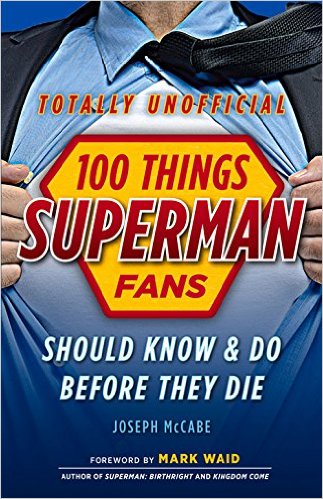 100 Things Superman Fans Should Know & Do Before They Die is unlike any Superman book I've ever read. SFX magazine editor Joseph McCabe is tasked with condensing nearly eighty years of Superman history, spanning both lore and popular culture, into a one-hundred chapter, 301 page book. For the most part, he is largely successful.

Comprised of one-hundred easily digestible chapters, McCabe manages to break down the Superman legend into its core components. Beginning with the creators and the creation, the book proceeds to discuss the evolution of the mythology. Nearly every mainstay of the franchise is touched upon in some form or another.

Released at least a month prior to the premier of Batman v Superman: Dawn of Justice and the revamping of the DC Universe in DC Universe Rebirth #1, the book is relatively up-to date, including an entire chapter dedicated to 2015's Supergirl TV show.

However, there are areas in which McCabe misses opportunities to strengthen the informative nature of the book. Several aspects and iterations are only briefly discussed. Films like Superman III and Superman IV: The Quest for Peace receive their own chapters, but very little information is given about them outside of their casts and performances at the box office while topics such as The New 52 are limited to the occasional offhand comment. There were multiple chapters that could have been replaced to at least touch upon The New 52 and the changes it brought to the character. More specifically, some of the "list" chapters (i.e. "The Five Greatest Superman Spoofs," "The Five Greatest Superman Pastiches," etc.) could have been scrapped, or at the very least, retooled to produce a more inclusive book.

There is one area in which McCabe fails, however. Throughout the book, there are several instances in which there are minor factual errors. One of the most notable comes from a chapter in which Kryptonian names are being discussed. McCabe incorrectly states that the latter half of Lara Lor-Van's name comes from her mother when it is actually her father's name. In another instance, McCabe fails to mention that Mr. Mxyzptlk was originally spelt as Mxyztplk. Furthermore, McCabe incorrectly states that the "S" in the Superman text logo was redesigned in 1983 when it was really the "U."

Additionally, an incorrect year, off by two decades, is given for the same comic book issue twice in two separate chapters. Other minor typographical errors are present and considering McCabe's status as an established writer and editor, it is almost ironic that such errors, easily remedied by another proof read, have slipped into the final edition.

Despite this, McCabe produces a generally well-written book. With a legend as expansive as Superman's, it is nearly impossible to touch on every significant milestone and incarnation without neglecting something.

The highlight of this book, though, is the inclusion of thirty exclusive interviews with a wide array of talents who have been involved with Superman in one form or another. These interviews compliment chapters nicely, sometimes offering more insight than the chapter it is paired with.

Ultimately, the book is a great piece of work. Moderately priced and designed to be all-encompassing, Superman fans new and old will find something to enjoy about this book.

I rate 100 Things Superman Fans Should Know & Do Before They Die a solid 4 out of 5.

Buy "100 Things Superman Fans Should Know & Do Before They Die" by Joseph McCabe at the Superman Homepage Online Store.