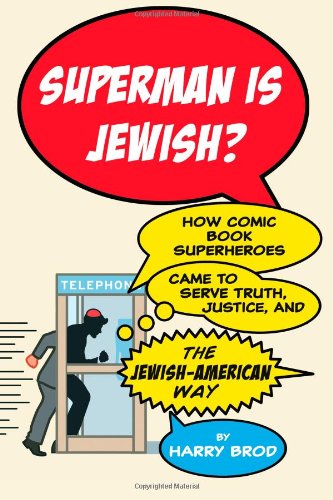 Most fans know, or at least ought to know, that Superman's creators, Siegel and Shuster, were Jewish. But Superman himself? I doubt that many people have ever entertained that particular thought - well, other than Adolf Hitler, who reportedly uttered the "Superman is a Jew!" line in response to some anti-Nazi Superman covers during World War II.

No, for Superman, the usual interpretation given is more of a Christian one. I first encountered that idea back in the early 60s, and a number of books have been written on that particular theme, the earliest one I know of being The Gospel According to Superman (A.J. Holman, 1973), as written by Presbyterian minister John T. Galloway, Jr. And, if the comics themselves didn't contain enough such seeds, certainly the movies have advanced the notion considerably. One needs only to think of Jor-El's words in the first movie about sending "my only son" to Earth, because "they only lack the light to show them the way," or the scene in which Superman is stabbed in the side, and falls in a cruciform posture, in Superman Returns. And on one of the special features sections of the Man of Steel DVD, a director can be heard telling Henry Cavill to "assume the Jesus pose." Oh, and let's not forget that crucifixion pose of Clark on a scarecrow pole from the TV series Smallville.

But Harry Brod, author of Superman is Jewish?, and himself Jewish, takes a different approach. He carefully delineates the background of Jewish immigration to the USA, and how Jewish perceptions and legends played into the work of Jews in the entertainment industry, especially movies and comics, both of which had heavy Jewish presence. In Brod's thesis, Krypton does not represent Heaven, but rather the "Old World" of Europe, with its hostility toward those of the Hebrew race, while Earth represents the USA, with its promise of freedom. Thus, Clark Kent is not the Messiah, but rather the ultimate immigrant.

Then, too, there are Jewish legends, such as that of the Golem, a mythical creature made of clay, who was strong and indestructible (though also blind), who served as the protector of Jews. So, when Jerry Siegel blended all of this, plus the murder of his father, the logical outcome was a strong, indestructible protector of mankind... a Supermentsh.

Now there's more to the whole subject than this brief summary has conveyed, but there are other characters the author wants to discuss. After all, as we know, Siegel and Shuster weren't the only Jews in the industry, and Superman not the only Jewish creation. Batman, Green Lantern, the Spirit, and numerous others from the Golden Age are mentioned, along with Spider-Man, the X-Men, etc., from later on. Author Brod carefully examines many of these features in order to explore the ways in which each one was Jewish, if indeed it was. Not all characters created by Jews necessarily reflected Jewish influence, and not all who did demonstrate that influence did so in the same way. For instance, of Spider-Man, Brod writes that he "is a post-Holocaust American Jew, and the guilt that plagues and motivates him is a specific post-Holocaust American Jewish guilt... about not having done enough to save one's people, about having passively stood by in the face of the crime and having let it happen." There is the Thing, who in 2002 was revealed to actually be Jewish.

As for important characters not of Jewish origin, they are not the subject of this book. In fact, Brod dispenses with two of the most significant in a footnote, to wit: "Of the DC Big Three of Superman, Batman, and Wonder Woman, only Wonder Woman, the Amazon Princess, comes from a fantasy world. Both she and Captain Marvel were written primarily by non-Jewish creators and imported into comics the whole panoply of classical mythology."

Besides Jerry and Joe, and Stan Lee, two creators singled out for examination are Will Eisner and Joe Kubert. Fans of the latter would do well to read what Brod has to say about him, in conjunction with the TwoMorrows volume on Kubert. And could any book on Jewish creators overlook Joe Simon and Jack Kirby? Particularly with regard to Captain America and others of his kind, Brod writes that "When the superheroes added taking on the Nazis abroad to their agenda of fighting for justice at home, they were following the Jewish community's support for the Roosevelt administration's policies."

But Brod wisely doesn't confine himself to super-heroes. "Of Mice and Superman" is an entire chapter dedicated to Art Spiegelman and Maus. Even Jewish artist (not of comics) Marc Chagall is referenced at various points in the book.

To return to the starting point, Superman himself, I understand and agree with Brod's thesis and his impressive scholarship in that direction. As a Christian, however (though a strongly pro-Jewish one), I also agree with the Christological interpretations. I would posit that deep within the Jewish psyche there is a longing for Ha'Mashiach (the Messiah), and this is reflected in the work of Jews in comics. I don't see it as "either/or" but rather "both/and."

In any event, I think that comics fans in general, and Superman enthusiasts in particular, would find a reading of Brod's work to be quite rewarding and informative. It would open up entirely new and heretofore unconsidered dimensions to their favorite characters. My own brief review here has not done the book justice, but if it has whetted anyone's appetite for searching out and reading Brod's volume, I have fulfilled my purpose!

[You can purchase "Superman is Jewish?" in Hardcover or for the Kindle at the Superman Homepage Online Store.]