The Superman Homepage would like to thank Josh for agreeing to do this interview, and for fitting it into his busy schedule. 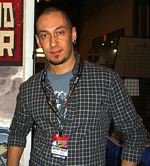 Q: Can you tell us a little about yourself, your background and how you became a comic book artist?

A: I'm a comic book artist currently living in Turkey. As with most artists I started out drawing as a kid. I've always been interested in art, and comics have been a part of my life since my earliest memories. As high school came to an end I decided to have education in arts so I've studied Graphic Arts and Animation in university. Meanwhile I started creating comics in fanzines. My work got noticed in time and I started doing work internationally. One thing led to another and I started doing freelance comic work for the bigger comic book companies.

Q: You were born in Turkey, and are obviously proud of your heritage, was it hard breaking in to the American comic book industry being a non-American? Do you think it's necessary to live in America to be an artist for DC Comics or can you work from anywhere in this day and age thanks to the Internet?

A: I think it's been a long and arduous road for me to become internationally recognized as a comic book artist. I don't think it had anything to do with my descent but more due to the lack of direct or easy communication with the business that I wanted to be a part of. Having almost no one else beside myself to point me in the right direction or guide me, I've had to work things out on my own. Luckily the internet came as a savior and made things much easier for everyone. Before the advantages of the internet I had plans of moving out to the US to pursue my dreams but there was no more need for that thanks to the practicality of the internet. You can be anywhere in the world and do your thing just as long as you have a decent connection.
I do believe getting to know people in real life is important if not essential though. So I try to make it to a few conventions every year to get together with my collaborators, editors and fellow creators. Human contact and interaction is one of the more fun and educational parts of this job. 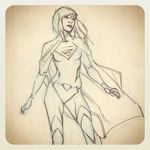 Q: You'd previously been hired to work for DC Comics on the "Brightest Day: Atom" oneshot and an Atom back-up feature in "Adventure Comics", how did you get the job of being the artist on the relaunch of "Supergirl"? What was the process behind that?

A: Right after the "Giant-Size Atom" book I started working on "Star Wars: Jedi - The Dark Side". While I was on that DC offered me the chance to do some covers for "Supergirl". This was for the pre-New 52 book. Later I was asked if I'd be interested in doing an ongoing book for them. They were being really vague and after a non-disclosure agreement I was filled in on the details. Turns out I was being offered to be a part of the New 52 with Supergirl. I was pleased as I was looking to do a single character book with a preferably female protagonist.

Q: Some of the criticism directed towards the current "Supergirl" title centered around her going from fight to fight to fight, issue after issue with no real character development (up until the Black Banshee story). How do you react to these comments? And as an artist do you prefer drawing the more action-centric issues or do you prefer the quieter character stories?

A: I would say we started out with the series in a decompressed fashion by design. We wanted to put out an entertaining book with big action while maintaining heart and some intimate character moments. We wanted to show Supergirl, although very alien to us, is someone we can easily empathize with. Although we've had some big fights divided into several issues I believe we've covered a lot of ground with Kara's past while establishing her status on Earth and a good cast of characters surrounding her. We've raised a bunch of questions for which there'll be some answers coming up real soon. 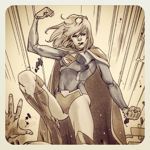 Q: There's always a lot of discussion regarding the sexualization of female characters in comic books. Many feel that the design of Kara's costume in the "New 52" is inappropriate for a teenage girl, especially from the waist down. What are you thoughts on this? And what do you like/dislike most about this version of Supergirl's design?

A: Truthfully, I completely disagree on this regarding Kara. Sure, there are obviously sexualized or overtly provocative costumes on some characters out there but I don't think Kara fits that category. Kara's costume and its purpose has been hinted at in the first and sixth issues. It's basically a training outfit. If you take a look at modern sports, you'll see that female athletes dress up pretty lightly. So in that sense, or any other sense, I don't think Kara's outfit is sexualized or provocative at all. Admittedly I try to draw her attractive but I aim to keep it tasteful at all times.

Q: In "Superman" Clark's new suit is Kryptonian technology which he took from Brainiac. He can put it on or take it off simply by pressing his S shield and activating it. In the Black Banshee storyline over in "Supergirl", Kara is seen removing her suit like general clothing. Is her suit just fabric or armor like Kal's?

A: Well, before that we have shown Simon Tycho having it tested out in the fourth issue. Unlike Kal's suit, Kara's outfit is a type of indestructible fabric.

Q: When drawing Kara, do you have a particular model or reference photo you work off? Or does her likeness just come to you automatically when you sit down to work on a page?

A: I think it would have been a good idea to have done that but no, I don't have a particular person that Kara's features is based on. I do have a general impression of how she should look in the book since the start. So I try to adhere to that. 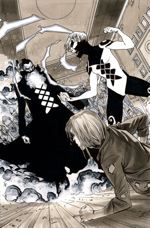 Q: The Black Banshee story line that recently took place in the "Supergirl" title introduced us to a completely different Silver Banshee. Were you given free reign to come up with your own redesign of the Silver Banshee or were there guidelines given to you either by DC Comics or Michael Green and Mike Johnson?

A: Unless they were already designed earlier in other books, I have the freedom to create the looks for every character appearing in the book. So basically everyone except for Supergirl and Superman were entirely visualized by me. I have to say that on some designs I get very specific suggestions from Mike Johnson and Michael Green. Of course our beloved editor, Wil Moss pitches in with great concepts too. For Silver Banshee, I was given certain ideas by the team and worked out some designs on which we had some back and forth discussions on. We pick and choose the best parts and try to come up with good designs.

Q: In your opinion, is the comic industry still a strong business? What advice would you give to upcoming artists looking to break in to the industry?

A: Obviously it's not as widespread as it was many years ago but I feel it's in a very good place right now in terms of what is being put out. Some would say that everything that needs to be said about comics is already said and there's not much else to do. I beg to differ, as I believe this may be the case in some genres or perhaps on certain characters but I feel comics have so much to offer. It's one of the strongest forms of storytelling ever and the possibilities are enormous. Especially nowadays, with the integration of technology and communication, comics are more accessible and diverse.
So getting your work out there is actually the easy part. You can self publish in lots of ways and it will find a following as long as it's good. If one wishes to make it into the mainstream comics, the first step is the same, do good work and have it reach as many people as possible. It will be noticed sooner or later.
As for artistic advice I've never fancied myself a mentor but I would have some suggestions; First and foremost is to face the truths - There are no shortcuts! You have to put in the hard work. Practice will improve your skills and observation will carry you to higher levels. Study from the masters and learn from them. Investigate and imbibe from real life. Comics is a form of storytelling so that should be your ultimate goal; To tell a story and tell it good. 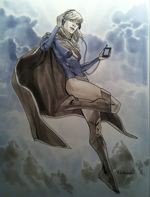 Q: Can you let us in on any upcoming Supergirl storylines you are working on or will soon be working on? What are you most looking forward to?

A: Right now I'm working on the zero issue. I'll be vague here to avoid getting sliced and diced by the DC legal ninjas but expect quite a few answers on Kara and her origins. It'll be a very gratifying issue for long time readers while being an excellent starting off point. Also we've got some surprising new, but maybe familiar, characters appearing in upcoming issues. You'll never guess who.

Q: Other than "Supergirl" what else are you working on that fans should pick up to check out your work?

A: Right now I'm working on being a good father to my son, so readers should look forward to that. Seriously though I don't have anything else on the horizon at this point except for a personal project that is in the works in a very slow burn.